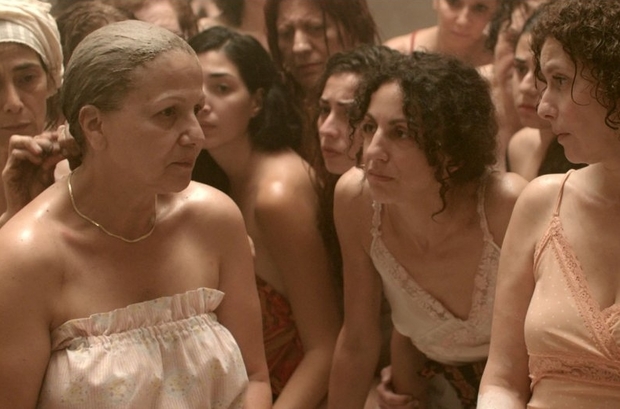 JAMES WITHERSPOON previews Rayhana’s I Still Hide To Smoke as part of SAVAGE’s coverage of the 2017 Film Africa festival.

I Still Hide to Smoke is a remarkable piece of work: a stunning, bruising critique of oppressive patriarchal society and conservative Islam that’s powerfully incensing and authentically human at the same time.

Hiam Abbass stars as Fatima, the owner and operator of a Hammam. Over the course of a day, the women of her village come to bathe, gossip, and seek refuge from the harsh realities of the world outside. However, when a pregnant girl rushes in, covered in blood, their world is turned upside down. Under assault from both ultra-conservative women inside, and violently sieging men outside, Fatima must try to control the situation and keep everybody safe.

The standard of acting on show here is unparalleled: all the players give everything they have in portraying their roles in a genuine, convincing way. Lina Soualem as a fundamentalist outcast, and Sarah Layssac as the woman who was wronged by her brothers, are particularly successful. There’s a huge amount of surpressed rage and unspoken context in this relationship, which the viewer can feel in every terse exchange between the characters, and even in the way they physically react to each other’s very presence. This high standard has a lot to do with why I Still Hide to Smoke often feels like it could be a documentary: everything onscreen has a terrifying plausibility that threatens to break down the paper-thin fourth wall which separates us from the action.

Rayhana may have chosen to set her film in 1995 Algeria, but it feels like it could’ve taken place yesterday: a heady cocktail of topical ingredients that threatens to overwhelm its audience in a sea of rage and sorrow. I Still Hide to Smoke has been skilfully constructed so that we get to know and respect its main protagonists, before the world begins to close in and threaten them, to the point where we’re able to effectively empathise with their situation. We feel the fear, the desperation, and the fruitless rage that they do. We, too, despair as the harsh realities of conservative religious dogma are just accepted by certain characters who wilfully repress themselves in the name of God. We, too, experience the hope that comes from camaraderie and reason – the hope that one day things will be better for them all.

That’s not to say it’s a perfect piece of work. Despite the fact that it’s trying to exhibit life in all its complexity, I Still Hide to Smoke sometimes comes off as too unfocused and disjointed to channel its power into one story. For those less enamoured with the social-realist style of filmmaking, as well, this is a piece with very little style or originality. It’s interesting to note that the script originates from a play of the same name – nothing is being added, per se, by the addition of a movie camera. But, overall, the dramatic skill on show from everyone involved, combined with the dynamite dialogue, are enough to make this an extremely powerful piece.

It’s a fantastic feature, anchored by powerful performances and even more powerful ideas. But, most remarkably, I Still Hide to Smoke isn’t afraid to say what it really thinks in situations where others would avoid the political fallout that can so easily entail from attacking a country’s regime with such vicious intent.

‘I Still Hide To Smoke’ is screening as part of Film Africa on 28 October. More information on the festival and the programme here.