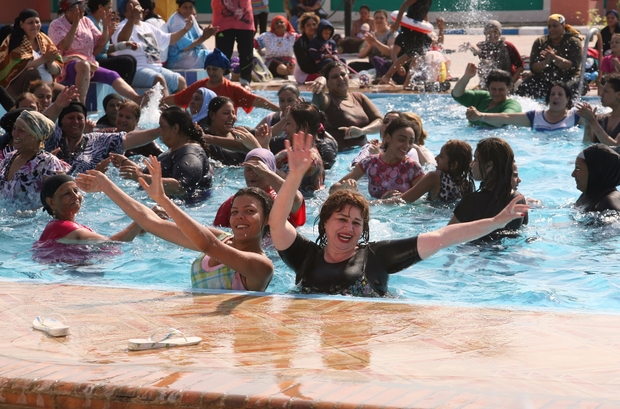 FARIDA EL KAFRAWY reviews Kamla Abu Zekry’s A Day for Women ahead of its screening at Film Africa 2017.

When a new pool in a small Egyptian town opens, Sunday is declared the day for women. In true Egyptian style, there is grumbling about how the government has chosen to spend its money, and though the tone is light-hearted and comedic, the poverty in the town is clear. Azza, a spirited young woman and a full-time carer for her bedridden grandmother, is endearingly the most excited. Her new swimming suit is the talk of the town. The seeds of young love are sown when Ibrahim, the young mechanic, cheekily watches her in the water on the first Sunday. After announcements are made about the women’s day, the pool fills on following Sundays, providing the women with a temporary relief from the hard lives they lead. Shamiya, considered sexually immoral on account of her work as an artist’s model, encourages her closest friend, Laila, to join. For Laila, who has lost her son and all her joy in life, this first visit to the pool marks both the depth of her suffering and the beginning of her healing; for Shamiya, a social acceptance and understanding. A battle between men and women begins as a result of the controversy over the women’s day, the pool having had great and unforeseen consequences for the gender power balance in the town.

The atmosphere is well managed, with both deeply intense scenes and comic, silly moments which provide relief. One can walk out of the cinema with a light heart despite the struggles portrayed – yet Zekry’s evident fear of making A Day for Women too heavy makes the film feel rushed. There is simply not enough time allowed for the atmosphere to change: it is solemn one moment and then bathetically hilarious the next. Serious discussions are thus impeded; in one particular scene Laila dives into the deep end of the pool, even though she cannot swim, and is rescued by the lifeguard. Whilst the film is certainly progressive in its portrayal of depression, the discussion of this act as a possible suicide attempt is completely stunted by the trivial, humorous conversation which follow. The emotional shift is simply too sudden.

What is really to be applauded is Zekry’s creation of authentic characters. There is much to criticise in these figures, much that provokes the irritation and outrage of the audience: these characters are imperfect, and yet we feel empathy for them anyway. Azza is knowingly too naïve and frivolous, Laila is (initially) far too submissive, and Shamiya too self-pitying – and yet they all capture our affection and concern.

Of all the characters it is undoubtedly Laila’s brother, Ali, who is the least sympathetic. Ali is a metonym for the type of men who believe they are religiously superior to everyone else and assign themselves the power to judge others morally, whilst remaining ironically ignorant of the essence of their religion. He sexually harasses Azza, falsely accusing her of allowing Ibrahim to undress her (though he knows that this did not occur); he accuses Laila of being immoral, her work selling perfumes being deemed by him to be ‘stirring seduction’, even though he demands money she could only earn through this small business.

The political reasoning behind Ali’s character is all too plain: radicalisation is a major concern for Egypt and the rest of the world. However, Ali’s character is necessarily underdeveloped in order to ensure the audience feels only disgust towards him. Whilst the message that society will not tolerate such extreme views and behaviours certainly hits home, there is no portrayal of anyone gently challenging his views; painting Ali as wholly deplorable leaves little room for encouraging society to help those being radicalised in a more moderate way. In fact, perhaps in the face of reciprocated hatred and aggression, radicalised people will hold onto their views more fervently as their need for validation and acceptance is threatened. Neither the audience nor Ali himself are reminded of the man he was before being radicalised, as though he has always been intolerant and conceited. Certainly, we must reject extreme views, but we must also hope to reform individuals, reminding them of who they truly are – even when others have destabilised their sense of this for their own political aims.

Zekry’s film has a clear agenda, which is representative of the typical Egyptian philosophy that the arts are a means to a political end. The film empowers women as they struggle for their right to live as they feel best; it criticises the vices of the the Egyptian community whilst applauding all its virtues. Whilst Zekry could have been more ambitious in her vision, the film successfully challenges traditional gender politics, raises awareness of mental health issues and encourages us to have soft hearts and refrain from judging the actions of others.

‘A Day for Women’ is screening as part of Film Africa on 30th October at 20.30 at Rich Mix . More information on the festival and the programme here.