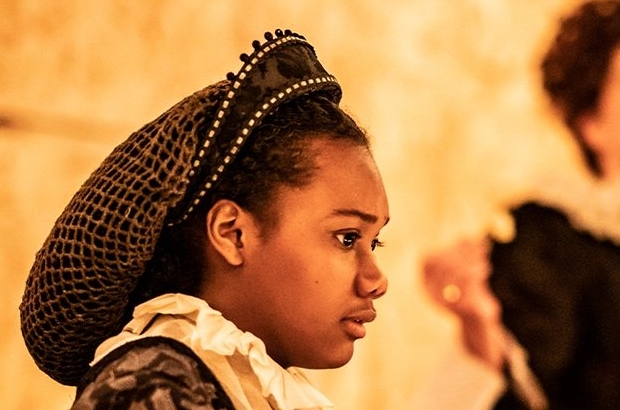 The play’s anachronistic meddling and conscious theatricality set it firmly in its own league. Its staging in the barely revealing candlelit space conjures an atmosphere of amused shock, wide-set smirks and subtle thrills, all of which pave the way (if not split the sea) for Ella Hickson’s indignant, power-hungry and feminist Elizabeth I. As the woman who has been remembered for her successful ruling of the throne for 44 years despite a lack of husband or heir, Hickson has re-painted Elizabeth’s face with the extremes of ambition, and does so in a human, hubristic and relatable manner. Her actions might be conniving, self-serving and malicious, but in a world pitted against her for her ovaries and natural powers of seduction, who is really to blame?

There is no doubt that the majority of the play presents the audience with a character akin to a snotty, arrogant and disagreeable child, who pulls and pushes at all those around her to near breaking point. Yet Hickson’s performance is a double-edged sword which demands us to reconcile any revulsion at Elizabeth’s disloyalties and scheming antics with the disproportionately harsh treatment that she is perpetually subjected to upon her throne. When the blood on her bed sheets is newsworthy, and every ‘loyal’ servant to her throne tries to find a new form of security i.e. a male replacement, it is no surprise that any warmth or compassion within her character takes a hit.

Elizabeth faces false accusations of treason due to her association to Thomas Seymour. Her brother and cousin docket her as a threat to the throne. Even once upon the throne she becomes ‘subject to the wiles of William Cecil, who questions her right to be nominated supreme head of the church’ (Michael Gould). For all this, her hubris surely serves as the ultimate mask. And yet her strong-headed nature almost becomes admirable, if ill-advised, as she spends her most formative years surrounded by the colluding high society of the court and palace, and the Globe’s loyal audience…

In this way, the play serves as a unique and unexpected exposé of the ins and outs of Elizabeth I’s reign, offering a sideways nod to female rights and empowerment. Her character is clearly questionable and yet we still leave feeling respect for the woman who demands to be head of the church, who considers herself genuinely divinely selected and who finds game hunting the most cathartic of actions. For this, we have Hickson’s intensely detailed character arcs to thank. She drizzles moments of weakness and struggle across Elizabeth’s reign, bringing her back down to earth (and the stage), and unveiling the true misogyny which bleeds through the heart of her court, that even she cannot fully resist. In these moments, Elizabeth I becomes kindred to the very deer she throttles and kills, subverting her more unsavoury traits. This allows her to step outside of her divine opulence and overbearing gowns in the ground-altering and character-shifting climax of the play. Hickson unveils the real woman behind the iron mask, without the guise or facade of the palace. It is here that Elizabeth is strongest, for all the materialism ‘is just hats’ at the end of the day.

All of this is effortlessly demarcated by the circularity of the script. The subtle repetition of lines as the action and actors grow creates a sharp and witty internal discourse between the play’s linear scenes. The same lines suddenly hold different meanings in their slightly different contexts but are still charged with the memories of their original use. Here, Hickson marks the maturing, or lack thereof, of the central characters. Elizabeth grows into a woman, but her childhood education and teen spirit lingers throughout.

And with such teen spirit comes a defiance of all the qualms and queries that her nation espoused… Suffice to say, this ground altering portrayal of Elizabeth I is not one to miss.

To the mavericks of all mavericks, this play captured her in all her glory.