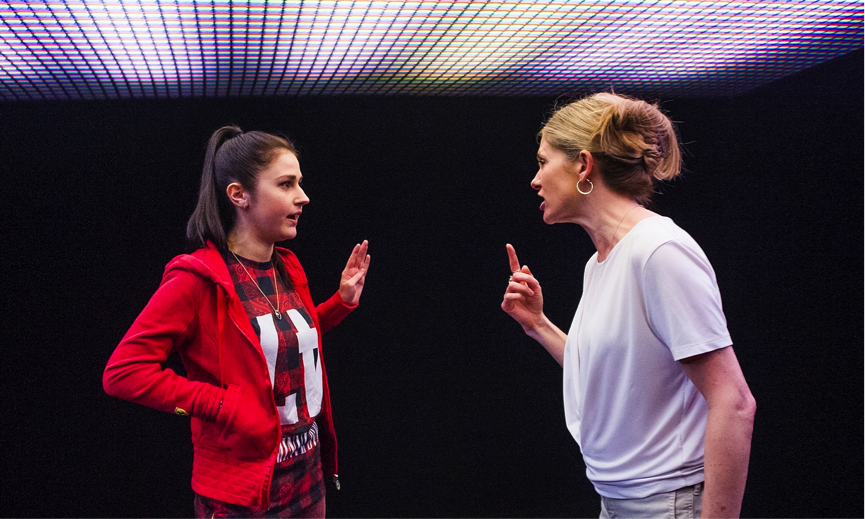 The play follows two parents, Di (Kate Maravan) and David (Jonathan McGuinnes), who deal with the devastating fallout from what initially seems like a simple teenage fight involving their son Jack. When an illicit video emerges online of Jack and his ex-girlfriend Cara, the parents’ relationship – as well as their beloved son’s reputation – is slowly torn apart by a web of secrets and lies which is gradually unravelled in the course of the play.

A claustrophobic suburban setting is evoked with an uncanny familiarity in the fiery exchanges between Di (Kate Maravan), who is helplessly consumed by paranoia, and David (Jonathan McGuinness), who will go to any lengths to protect his son – including blind denial. We can feel the electric tension between them. It constantly threatens to overspill, irrevocably poisoning their previous domestic intimacy.

Though their son Jack is the invisible centre of gravity around which the play revolves, he does not appear once on stage. Meanwhile, the rest of the cast desperately grasp at some kind of terrible meaning behind his actions, a meaning which ultimately never emerges. Distraught and in search of the morally right thing to do, Di confronts both Jack’s best friend Nick (Anyebe Godwin) and Cara (Ria Zmitrowicz), leading her to propose a shocking Faustian bargain which fundamentally calls into question her parental duty of protecting her son.

All this might make watching the play a rather stifling experience were it not for the deft touches of sardonic wit which Fritz peppers the parents’ dialogue, casting occasional shafts of light on the play’s dark subject matter. Kate Maravan is absolutely compelling to watch as the emotionally tempestuous Di, while fresh face Ria Zmitrowicz shines as a defiant, but ultimately vulnerable, Cara. Be sure not to miss this triumph of new British writing.