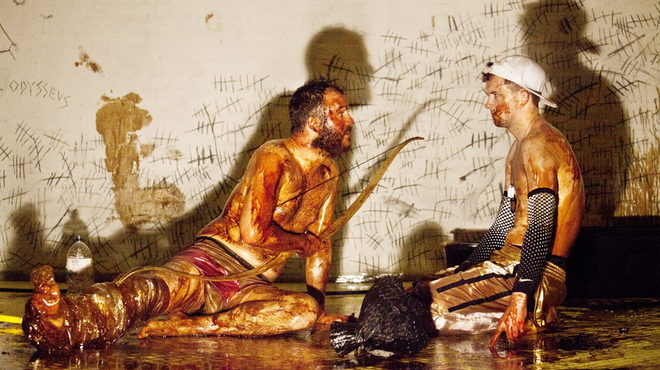 The Yard Theatre, nestled amongst the labyrinthine network of warehouses in Hackney Wick, is an apt host to ‘Stink Foot’, its theatrical counterpart in peculiarity.

The play unfolds against the backdrop of the vacuous warehouse: an extraordinary theatrical space brimming with sound at moments of vocal intensity; and light, when starkly floodlit. A sense of diminution is thus more acutely accomplished, via comparatively muted scenes of emotional candour, with understated speech, and a reduction of lighting. It is the bright-dim and clamorous-subdued contrasts that reinforce the focal point of director Jeff James’ eccentric adaptation: the moral journey of Neoptolemus.
As darkness encroaches so too does Neo’s sense of guilt. Even though opposed to dishonesty, Odysseus’ persuasive summons to use deceitful means to end the war proves a nigh impossible temptation to resist, for a man whose only want is to be ‘out of the bad business in Troy’. In order to fulfil the prophecy of Greek victory in the Trojan War, Neo must capture Hercules’ bow. Its faithful protector Philoctetes, a castaway with a stinking foot, will not surrender the bow willingly. Trickery is Neo’s only option and is his sole command.

One of the most striking alterations that Jeff James makes in his reimagined production of ‘Philoctetes’ is the casting of Rosie Thomson as Odysseus. Thomson’s command of the two male cast members – let alone the stage itself – is achieved in a bulldozing fashion; delivering lines with an emphatic matter-of-fact tone that conveys her character’s self-assured and bolshie nature. Initially the female presence feels a little redundant. Thomson asserts her authority through a parody of hyper-masculinity, but it is this overconfidence of action and speech that ensures her tyrannical reign, albeit humorously, is all the more indomitable.

By contrast, the weak-at-the-knees Neoptolemus (Joshua Miles) quakes at the mere suggestion of confrontation. Each of Odysseus’ orders to ‘fabricate’ and ‘embroider’ the truth lashes at Neo’s conscience, causing him to blanch with self-reproach as Philoctetes (Daniel Millar) unwittingly falls into the trap of words. The rapid interchanges between Miles and Thomson, a parent-child dialogue, quickly place the emphasis of James’ production on the paradox at its heart: the loss of honour incurred by telling a lie to win the war. At the centre of this moral battle, Millar, plastered in sickeningly tar-like treacle from beginning to end, deftly conveys the incongruency of Philoctetes’ character: a man both comical and pitiable. 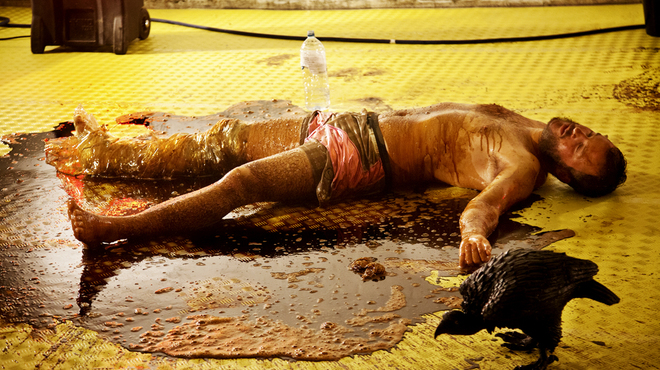 Being predominantly devoid of music, the play is punctuated by the actors’ dialogue and the occasional use of sound effects. Millar’s sudden, momentous outburst keenly pierces the silence; a pivotal moment in which the suppressed agony of Philoctetes’ diseased foot bubbles uncontrollably to the surface in a fit of hysteria. It is difficult viewing. All-consuming pain is challenging enough for an audience to witness, but the scene takes an even more stomach-lurching turn. The audience recoils in disgust as Neo, repulsed by the odour of the foot, retches and coughs up bile- needless to say Miles employs ‘method-acting’ during this scene with alarming commitment! Odysseus, a ubiquitous presence throughout, perversely enjoys the spectacle from the sidelines.

As the oozing pool of viscous treacle leaches outwards from Philoctetes’ squelching foot (the front row of the audience huddle beneath a tarpaulin to avoid being splattered), moral decay ensues with devastating effect. The light relief provided by pithy retorts and sarcasm is a welcome interruption to the intensity of the plot, maintaining a light-hearted feel despite the production’s often disturbing nature. There are a couple of occasions where laughter feels misplaced, yet this reflects the malleability of the language that frequently shifts from the comic to the tragic in a single a line. The movement of the actors – static in some scenes and frantic in others- also conveys a sense of unpredictability in the sudden onset of heightened emotion.

‘Stink Foot’ is a production without genre, leaving the audience torn between laughing and weeping. Jeff James’ adaptation is an incredible admixture of the modern and ancient. It is a truly memorable experience of theatre. Go and see it for yourselves.

‘Stink Foot’ at The Yard Theatre runs until Saturday 13th December. Tickets are £12.50 (and concessions are £10). For more information click HERE

All image credits to Bronwen Sharp