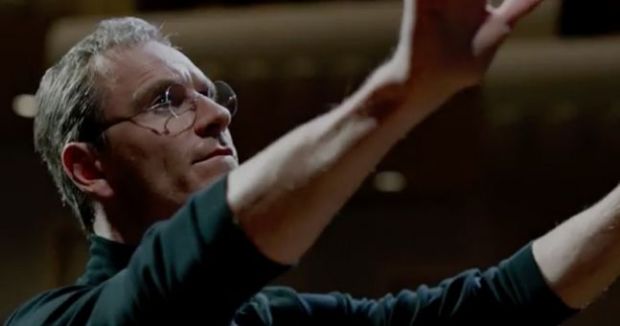 It’s often seen as damning with faint praise to call a film no more the sum of its parts, but with Steve Jobs, once all the players are engaged on the board, it blows any sense of dusty disappointment away. Michael Fassbender is as sensational as one would expect as Steve Jobs and ably supported by the likes of Katherine Waterston, Kate Winslet, and Seth Rogen. Danny Boyle directs with deftness and skill, cutting a lean picture from Aaron Sorkin’s swaggering screenplay. And, as one would expect from a Sorkin script, the film zips along at high speed like a whippet in a washing machine. There is quite the circuitry on display here.

The film takes the three act structure to new heights, centring around Jobs’ relationship with his daughter and colleagues in three different time periods in which there are three separate Apple product launches. Conflicts are resolved and friendships erased as relationships shift over the years. The manic energy of Sorkin’s script works perfectly to convey the high levels of pressure and energy of each product launch. The cast tackle the script with aplomb, and manage to convey the passage of time between acts too. It has become accepted that Fassbender is sensational in just about everything, but here he raises the bar to extraordinary heights. Seth Rogen has regularly fallen victim to poor reviews – in part because people underestimate how difficult it is to perform the kind of comedy he is known for – but here he too shines.

For all of Sorkin’s showboating there are still quieter moments, particularly in the father-daughter relationship at the centre of the film. These tender scenes serve as the calm in-between the storms of the product launches. However, Katherine Waterston’s mother figure is less than poorly sketched. Despite being given life by a very fine actress, she struggles to come across as more than a one-note whiney hippy. Her relationship with Fassbender’s Jobs seems a little derivative at times. Sorkin also can’t seem to help himself, sticking in a witty line when the film should be more serious and deflating some of the film’s tenser moments.

When there’s a central character as big as Jobs and a script by Sorkin it is often easy to forget who is marshalling all these forces. Danny Boyle’s direction is, as one would expect, just as good as usual. Boyle directs with a kind of home-made professionalism and brings lovely visual touches to the screen, such as a mirror that echoes the iPad, or a stunning rainfall sequence. As always, his choice of music is inspired and Daniel Pemberton’s score is seamlessly woven into the fabric of the film, along with songs by the likes of The Maccabees.

Whilst there are niggles to be had with the film, mostly in a little self-indulgence from Sorkin, this is a fine piece of craftsmanship anchored by several rich performances and an astounding central turn from Fassbender – obviously.