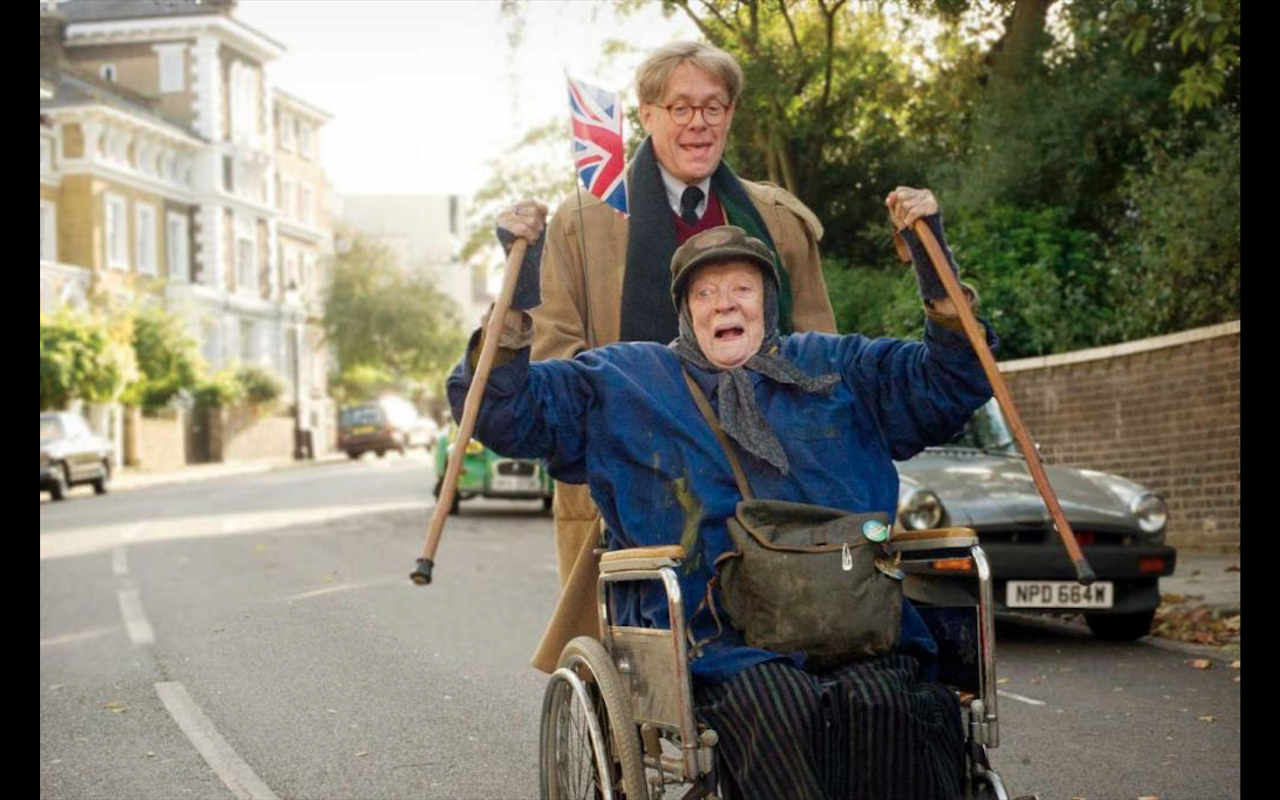 Audiences these days are used to Maggie Smith as a ray of sunshine in the otherwise coma-inducing, sickeningly twee Downton Abbey. What a delight it is then to see her on fabulous, poo-slinging form in Alan Bennett and Nicholas Hytner’s delightful and touching film The Lady in the Van. Literally, poo-slinging.

Based on actual events in Bennett’s life, The Lady in the Van follows Smith’s Miss Shepherd, a homeless lady living in a van on the streets of Camden, and her complicated relationship with the writer Alan Bennett (here played by Alex Jennings), whose drive she ends up parking on for a ‘temporary stay’ that lasts 15 years. As with all of Bennett’s work, the film is an exquisite tapestry; at first glance it looks and feels beautiful, telling an incredible story with genuine wit (and nobody but nobody does wit better than Bennett), but turn it over and you’ll see there is so much depth to the film, with a myriad of interlaced narrative and thematic threads. This is a film about writing; about old age; about religion; about sickening middle-classness; about making films, and countless other things. But crucially these many themes never burden the film. Hytner maintains a lightness of touch that spins the film into brilliance. The images and story are beautiful in of themselves, leaving you with plenty to pick over on the walk home.

Of course it is easy to focus on the story and characters when you’re working with a script and cast as accomplished as this. Smith is already, and rightly, garnering awards buzz for her performance. Alex Jennings skilfully inhabits Bennett: no easy feat given that the man he is playing has written the dialogue. At times, endearingly but never distractingly, the picture plays out like Hytner’s farewell to the National Theatre (he stepped down as Artistic Director after 12 years earlier this year). For instance, there are appearances from the entire main cast of The History Boys (the absence of the late Richard Griffiths is felt), as well as turns by legendary thespians such as Roger Allam, Dermot Crowley and Eleanor Matsuura, to name but a few. Allam in particular provides a nice turn as a slimy, Glyndebourne-going neighbour whose outward shows of generosity disguise his inner conservatism.

One of the things that the film manages not to be about is homelessness and charity. At no point does the film venerate Bennett’s actions. There’s no kindness to be found here: in fact, The Lady in the Van often goes out of it’s way to make sure the audience knows that Bennett isn’t the straightforward Good Samaritan everyone assumes he is. This isn’t a cuddly story of the lonely writer who started a bubbly friendship with the down and out homeless woman who has a hidden past. The kid gloves are firmly off with this adaptation and it is all the better for it, particularly when Jim Broadbent comes in, leering, to tease out past secrets.

This might play like Hytner’s swansong to the National Theatre, but let’s hope that it isn’t his swansong to cinema.

‘The Lady in the Van’ is out today in cinemas nationwide.