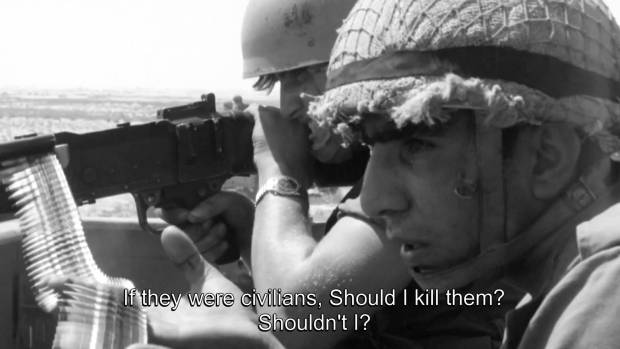 ROBERT STEVENS reviews ‘Censored Voices’, a history of the 1967 Six-Day War between Israel, Jordan and Egypt.

‘People, not places’, murmurs one veteran of the 1967 Middle Eastern Six-Day War, summing up the central theme of Censored Voices. This documentary eschews the idea that people in wars always fight for something, preferring to explore how a dehumanising war has impacted individuals. Directed by Mor Loushy, the documentary is constructed around governmentally released secret tapes, in which Israeli soldiers recount the insecurities they felt during the war. Censored Voices burrows below the chatter of gunfire, searching instead for the sensitive souls hiding inside bulletproof vests and under tin helmets.

What results is an insightful and candid exploration of the honest minds of these conscripts. The documentary is frank and tragic, as we hear how soldiers were often indifferent to the war, careless about their cause and feeling foolish in their decision to fight. Censored Voices delves into the difficult process of men becoming soldiers. Rather than depicting a typical binary narrative of Zionists in opposition to Egyptians, Loushy’s film is a thoughtful perspective on the horrors of war and, as in similar works such as Waltz with Bashir and The Act of Killing, dedicates itself to individuals’ stories rather than a general historical background.

Joshua Oppenheimer’s series of films exploring a similar nationwide turmoil in Indonesia, such as The Act of Killing, may have been more successful in looking at the mental states of those forced into war. Censored Voices lacks the tightly-wound structure of Oppenheimer’s work, ambling along pleasantly yet without much direction. Meanwhile, Oppenheimer truly managed to find something unexpected – to break characters down into their rawest self and to find deepest regret in murderers who have been respected by their communities. Perhaps inhibited by its ambitious scope, Censored Voices fails to find characters with truly sincere and genuine thoughts on war, and rarely leaves its audience with anything more than a collection of indiscriminate thoughts on the subject.

Censored Voices attempts to present the often forgotten individual voices of war, but lacks the focus to make a truly lasting impact. Images and clips flash by, but feel more like an accompaniment rather than anything of real value. The narrating voices fail to construct characters in three dimensions, unfortunately forgetting the film’s purpose of adding personality to the blank stares of war. Yet Censored Voices must still be commended for its primary merit: it focuses its attention not on being ‘in the moment’ of war, but to view, without judgement, the anxieties of soldiers struggling to justify their cause in the midst of battle. Although the documentary is flawed as Loushy favours quantity of voices over the quality of their narration, its honest exploration of human responses to an inexplicable war should be respected.