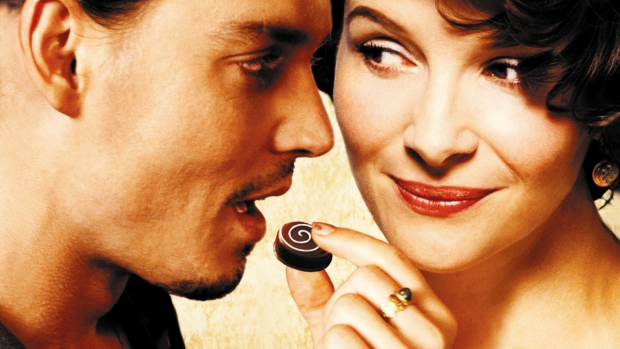 Recently screened at London’s Chocolate Expo on the 17th and 18th October, Chocolat (2000) is a mouth-watering film depicting a sweet romance in a traditional, religious village. Directed by Lasse Hallström – nominated for an Academy Award for The Cider House Rules – this adaptation of Joanne Harris’ novel sees single mother Vianne (Juliette Binoche) open a chocolaterie in the quaint French locale of Lansquenet. Upon arrival they are greeted with the disdain of the locals, in particular the village leader Comte de Reynaud (Alfred Molina) who sees the endeavour as an immoral temptation for the beginning of Lent, and urges the locals to boycott Vianne’s business on Sunday Mass before Easter.

What follows is a tale of love, companionship, mysticism and, unsurprisingly, chocolate, as the film explores a quirky battle between the sweet temptation of chocolate and the village’s pious resistance. Vianne shares confectionary aphrodisiacs, euphoric to the senses, cracking the subservient villagers one by one, and urging them to take control of various conundrums the church has yet to assist. Josephine (Lena Olin) finally finds the courage to leave her abusive husband,  becoming Vianne’s assistant and friend. Meanwhile, Vianne’s opinionated old landlady Armande (Judi Dench), reconnects with her estranged daughter (Carrie-Anne Moss) after a period of rigid hostility. Chocolate even spurs on love between our heroine and the ‘river-rat’ traveller Roux (Johnny Depp).

Condensing 200 pages of a richly textured book into two hours, Chocolat is saturated in story and character. Binoche was Harris’s first choice for the role of Vianne, describing her portrayal of Vianne as ’luminous’. Olin, wife of director Hallström, portrays the heartbreaking abused wife Josephine. Watching Binoche and Olin interact is certainly one highlight, as they display an innate friendship, having co-starred previously the 1988 film The Unbearable Lightness of Being. Additionally, Molina delightfully portrays the antagonist Reynould as a sanctimonious, pragmatic man who believes in ‘church, not chocolate’.

Chocolat spoils us with a visual feast. The village is a poet’s muse of the quintessential cobbled enclave, presented with stunning shots of the French countryside. Viewers are further offered a bombardment of indulgent images of chocolate, from Nipples of Venus truffles, to sprinkled cocoa dust on rich chocolate cakes, to tempered intricate sculptures and fudgy hot chocolates.

While the essence of the film encapsulates the intricacy of the French chocolaterie, it most importantly propagates the emotional resonance of chocolate that transcends beyond our control; how the sight, smell, and taste of these treats allows for a spiritual journey for each villager. The film plays, therefore, with the apparently divine effect of chocolate. The repeated metaphor of Vianne’s chocolate as ‘powerful witchcraft’ or ‘magic’ nods to the chocolate-based folklore and ancient rituals of Mesoamerican cultures. Founded by the Olmecs, chocolate, known as cacahuatl (‘bitter water’), was worshipped as a stimulant for cooking and as a celestial gift. As Vianne recalls, Mayans venerated chocolate as a blessing from Ixcacao, the goddess who gave mankind his first cacao tree. Chocolat contrasts those who regard Easter as a time of spiritual meditation and avoidance of venial sins, particularly gluttony, with those who simply indulge in the other-worldly pleasure of chocolate.
At the film’s climax, viewers are entertained watching the resistance of villagers crumble to Vianne’s chocolate expertise, pushing Reynaud to the precipice of insanity as he prepares his final subterfuge. His massacre of Vianne’s work quickly blurs into gluttonous madness, as Molina perfectly conveys a mental breakdown against the confectionary delights, challenging viewers to question the morality of behaving indulgently rather than resisting temptation.

Paraphrasing Joanne Harris, the adaptation remains uncanny to the spirit of the book. Although fans of the novel may be somewhat frustrated to see darker elements of the story omitted, Chocolat makes up for this by tempering flavours of drama, comedy, and magical realism. It could hardly fail to charm even the most reluctant viewer. Nonetheless, the film is a perfect treat for anyone’s chocolate cravings, and the novel’s satisfying moral is repeated here: that pleasure and joy are a crucial part of life.