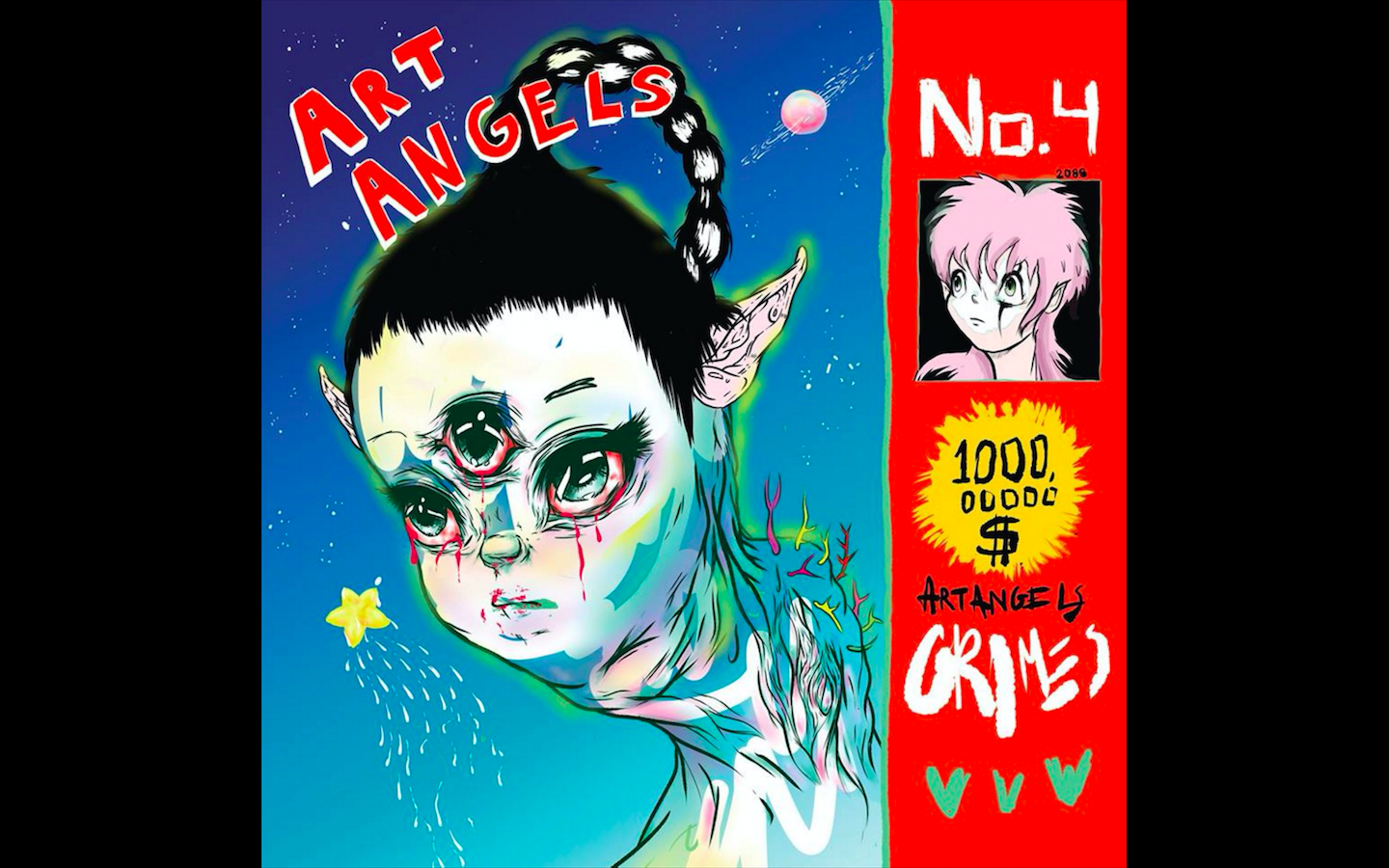 TOM BROADLEY looks at the new album from the Canadian electro-pop artist.

Many artists struggle with the media’s perceptions of them, but perhaps no one more so than Claire Boucher, better known under the moniker Grimes. She has always seemed overly anxious of reductive categorisation; recently she has been dispelling the myth surrounding the recording of her brilliant 2012 album, Visions. The eagerly recounted story goes that she spent three weeks holed up in her Montreal apartment, working away on her laptop to produce its left-field electro-pop. However, a few months ago, in an interview with The Fader, she reassured us that she was adequately supplied with food and did, in fact, take breaks to sleep. On Art Angels, there is a clear tension between the two extremes that the story and her retraction exemplify. On one hand she is unabashedly weird, a sort of digital mystic for the internet age who holes themselves up in their darkened bedroom for weeks; on the other, she is a professional, focused musician and a perfectionistic producer.

This studio gloss is certainly the most noticeable departure from Visions, which was abounded with wordless, warped vocals, and askew, lo-fi synths. While she does still manipulate her voice, and electronics move with a near disconcerting rapidity at times on Art Angels, the overall tone is characterised by a newfound clarity, and the addition of acoustic instrumentation. Grimes’ skills as a producer are most obvious on ‘Scream’, a track that does not feature her voice at all. The spotlight instead goes to Taiwanese rapper Aristophanes. You do not need to understand Mandarin to appreciate her rapid flow and vocal dexterity. Bolstered by a bone-shaking bass and ominous guitar, she sounds brilliantly sinister, as she whispers about death and decomposition.

While ‘Scream’ is very different from most modern pop music, elsewhere Grimes’ bubble-gum tendencies are on full display. ‘California’ is a disconcerting mix of tinny country guitar and sugary melodies that belie the lyrics’ darker side: ‘And when the ocean rises up above the ground / Baby I’ll drown, in California.’ It is her unique reaction to oppressive media labelling; this reassertion of her own individuality and independence is the album’s main recurring theme. ‘Kill V. Maim’ is another example of Grimes on a full-throttle pop trip. Over recycled punk guitar and arcade-game synths, she switches from quietly defiant to sweetly childish cheerleader chants. Songs like ‘Genesis’ seem distant from these sonic maelstroms, and these maximalist tendencies do not always serve the music well. ‘REALiTi’ was released in its demo form earlier this year: the reworking of it here, with additional bass and vocals, while not exactly detracting from it, does nothing to improve it either.

Art Angels is not just an album of overwhelmingly chaotic tunes. More subtle cuts from the record prove to be just as satisfying as the louder songs. ‘Easily’ begins with simple piano chords but opens up with a bouncy bass and a celestial choir into a quietly experimental song. Once again, she sings about the multifariousness of her personality, ‘I am the sweetest thing you ever saw, easily / suddenly you don’t me know at all, easily.’ The shortest song on the album, ‘Life in the Vivid Dream’, proves that Grimes does not need to pack a song with production tricks and instrumentation to be emotionally affecting. It is constructed with only guitar, piano, rain backtrack, and distant percussion, but her mournful reflections on trying to stay positive in a cruel world are still haunting.

In another recent interview, Grimes disavowed her most beloved songs, saying: ‘I hate “Oblivion”… I always hate songs that are singles.’ It’s a confusing statement, for fans in particular, given that ‘Oblivion’ is outstandingly euphoric and subtle; it is undoubtedly one of the best songs of the past five years. It’s impossible to expect anyone to reproduce such brilliance, and Grimes clearly is not interested, but it is nonetheless a little disappointing that nothing on Art Angels quite reaches those same heights. What it does show is that Boucher clearly on an artistic mission, and her dedication to her vision pays off in the flashes of genius on this album.

Art Angels was released on 6th November on 4AD.