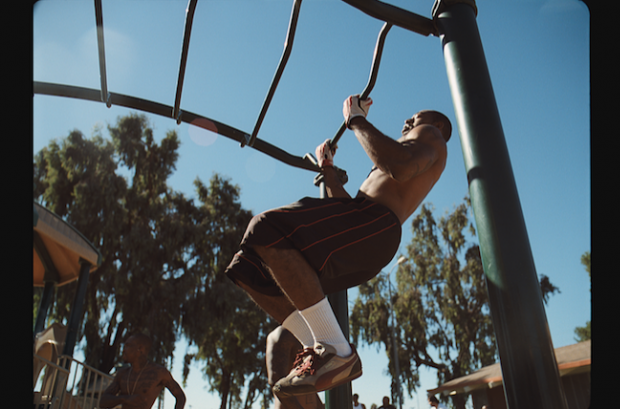 SELMA REZGUI reviews ‘The Infinite Mix’ at The Store for BLACK HISTORY MONTH.

The Infinite Mix: Contemporary Sound and Image is a collaborative exhibition presented by The Vinyl Factory, Hayward Gallery and The Southbank Centre. Video, sound, architecture and light are deliciously and eclectically blended in this audiovisual experience, located at ‘The Store’ on the Strand. The exhibition’s venue is a cavernous abandoned office block, and the spaces the viewer must move through to pass from one installation to the next are curiously varied: some have stomach-droppingly high ceilings and others are tightly labyrinthine. Each time you emerge from a self-contained installation space the hazy imprint of the piece you just experienced is strikingly counterpointed by the vastness or spacial constriction of the room before you.

One theme courses through the exhibition more forcefully than any other: depictions of black masculinity. Some pointedly break away from a focus on violence and threat, and others confront it head on. Cypriot Gaillard’s Nightlife is one such piece. Nightlife examines how features of urban and natural landscapes bear scars and traces of modern, and specifically black, history. The piece was shot at night in Berlin, Cleveland and Los Angeles. The focal points of this 3D video installation are a German Oak presented to the USA by the German Nazi government after Jesse Owens’ victory at the 1939 Olympics, a damaged cast of Rodin’s The Thinker, and a firework display above Berlin’s Olympic stadium. Gaillard’s installation contrasts the manmade and the artificial. The seemingly ‘natural’ German Oak was really an artificial gesture of congratulations, and the vibrant, immersive depictions of the firework display suggests the latter is the more organic and unaffected form.

Like the branches of an oak tree in wind that are presented in Nightlife, the Nazi Oak has had a ripple effect through modern black history. Gaillard’s inclusion of the damaged Rodin sculpture strengthens this link. Both the oak tree and the damaged sculpture are features of Cleveland’s urban landscape: the cast of The Thinker can be found outside the Museum of Cleveland, and the tree was planted in the courtyard of Owens’ Cleveland high school. The sculpture was damaged by a bomb in 1970, and The Weatherman (a left wing group affiliated with the Black Power movement) claimed responsibility for the damage. The installation traces the history of these features through the 20th century via a series of oblique links. One such visual link is footage of trees in LA’s Compton during a storm. Just like the Cleveland oak they are at the mercy of the wind and their branches move uncontrollably. The looped soundtrack features a sample of Alton Ellis’ 1970 classic ‘Black Man’s World’ (a repetitive wail of ‘I was born a loser’) and the 1971 remake ‘Black Man’s Pride’ is hypnotic; soon the words themselves fade into a solely sonic experience.

Another key piece was made in response to Kendrick Lamar’s 2012 album ‘good kid, m.A.A.d city’ Kalil Joseph’s ‘m.A.A.d’; it takes the form of a dual-screen ode to LA’s Compton. The installation collages home footage provided by Lamar and his family, clips of police brutality, and the artist’s own original film work, accompanied by Joseph’s remixes of Lamar’s record. Cameron Jamie’s video installation Massage the History presents a group of young black men perform an erotically charged dance in and around the furniture of a middle-class suburban living room. The installation is soundtracked not by hip hop, but by Sonic Youth’s Massage the History. Oddly enough this track seems to fit the scene, and lends the spectacle an incongruous sincerity. The hypnotic track and Kim Gordon’s otherworldly voice transforms what could have been a display of macho hyper-sexuality into an almost tender show of sensual vulnerability.

Both of the pieces discussed above take other artistic works as a starting point for an exploration of black identities and history. Similarly, Stan Douglas’ ‘Luanda Kinshasa’ feels both utterly contemporary and also very conscious of black history. Set ambiguously at some point during the seventies, it seems to be a live recording of a sprawling, elongated jam session. Shot in what appears at first to be a documentary style, it slowly dawns on the mesmerized viewer that such a complex and intricate construction of images and audio cannot possibly be organic. The title points directly to jazz’s African and African-American origins; the setting is revealed to be a reimagined take on iconic jazz studio ‘The Church’, where the likes of Miles Davis and Aretha Franklin recorded. The film warps ideas of time: the idea of the ‘present’ seems distorted beyond comprehension, and the film depicts a moment that reverberates through subsequent decades and into the here and now.

All this makes The Infinite Mix one of the exhibitions of the year – it’s utterly unique, immersive, and exploratory. At every turn (and twists and turns there are many) the films drive home the diversity and absolutely electric potential of video art, a far cry from any pretention or posturing you might associate with the format. Whether you spend half an hour or seven hours winding your way from The Store’s spectacular rooms overlooking the Thames down into its echoing underbelly, you won’t regret a single second.

‘The Infinite Mix’ is on until December 4 at The Store at 180 The Strand. Find out more: here.