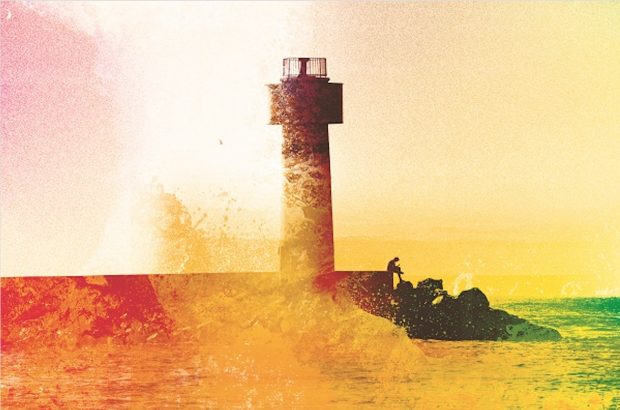 According to Greek mythology, Helen of Troy was the most beautiful woman ever to have walked the earth. Daughter to Zeus, she was immortalised in drama by Christopher Marlowe as ‘the face that launch’d a thousand ships’. Having eloped with a Trojan prince, Helen was the cause of the decade-long Trojan war that saw Menelaus and his brother Agamemnon lead a thousand boats and the entire Greek army to try and retrieve her.

In his debut play, The Acedian Pirates, Jay Taylor uses this great tale to weave the fabric of his own mythmaking. On Theatre 503’s tiny stage above The Latchmere in Battersea, the legend of Helen is revisited again in microcosm. Here, she is stolen from a childhood innocence where she sits and plays with her hair, dragged like a wretched animal to an oblique and nameless island where she is imprisoned at the top of a lighthouse and guarded by a military contingent. Outside, a grisly and slaughterous war in her name rages on.

As a towering figure in classical mythology and literature, Helen has signified many things. Here, Taylor depicts her being reimagined by the military as a symbol for a just cause, a cause that will enlist men to ‘Fight. Help. Assist. Do some good’, whilst paradoxically murdering those who differ from them only by the colours of their uniforms. The military that chaperone her imagine themselves as protecting her, but as her eerie opening monologue and bloodied clothing reveals, this is against her will. They have appropriated her, making her into a cause. The aphorism that one man’s hero is another man’s terrorist echoes throughout the production: Helen’s military guards believe they are on the right side of history and yet they can’t remember a time when they were not at war, they can’t even remember what they are fighting for. Indeed, no one has ever set eyes on Helen. Helen becomes known to the men in the play as the Moon, a symbol for great cycles and indeed the play rests on the premise that war is cyclical and one of the default modes of the human condition.

‘The Acedian Pirates’ is a play packed to the gunwales with mythology; a patchwork of legends that works remarkably on many symbolic levels. Its real achievement, however, is its moving portrayal of the human beings behind its many myths, its raw examination of humanity. Taylor dramatises the real human relationships that members of the army forge, asking us to question our preconceived notions of the military as a blindly jingoistic platoon. He also paints Helen as a mortal of flesh and blood, a prisoner of war who is stoic and brave, brilliantly rendered by Sheena Patel.

Upon a dimly lit circular stage, the cast of six horrifies and enraptures. The set, designed by Helen Coyston, is stripped away to a minimum and the actors make use of cigarettes, a book and a few knives as props. Her design offers a deeply atmospheric environment. Troy, who keeps Helen locked at the top of the tower is menacingly played by the magnetising Rowan Polonski. Jacob (Cavan Clarke) is the young recruit who in his youthful curiosity struggles with the idea of combat; his innocence is yet another casualty of conflict. Even Bernie (Andrew P Stephen) and Bull (Marc Bannerman) who have smaller parts boast distinct and intricate personalities. The men are all Acedian pirates whose inability to question their moral standing leads them to mindless killing, a reflection of the play’s wider concerns with military intervention and occupation. As mere humans, they are prey to the moral failing that is Acedia.

The action takes place in a lighthouse, a place of transition, an in-between and place that could be anywhere. As is clear from the direct liftings from Dante, this is also a kind of hell with the circular levels of the watchtower lending themselves well to being the figurative representations of the 9 circles of the inferno.

Although the play reaches back thousands of years for its inspiration, it is also a true product of modern theatre, crowdfunded on Indiegogo by over 50 backers. It has all the hallmarks of postmodern drama too, fusing Orwellian dystopia, Will Eno’s acerbic humour and Beckettian nihilism. As Bobby Brooks full-length directorial debut and Taylor’s first staged production, it shows a great deal of promise. ‘The Acedian Pirates’ asserts Theatre 503’s reputation as a stalwart of independent fringe drama and proves it continues to be one of the boldest and most innovative theatres in London.

‘The Acedian Pirates’ is showing at Theatre 503 until the 19 Nov. For tickets and more information click: here.