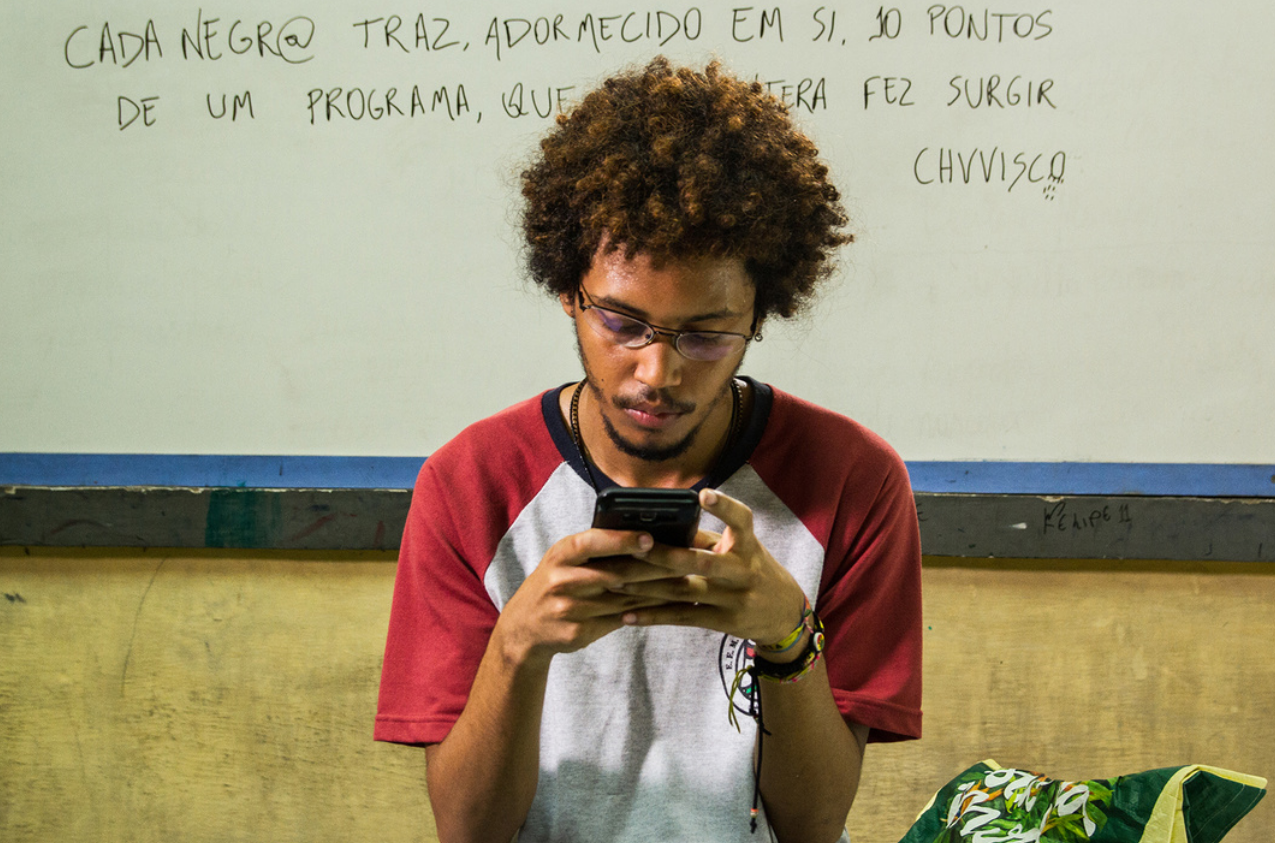 In 2020, the case of George Floyd invigorated the world’s understanding of systemic racism in America, and the Black Lives Matter movement came front and centre of our newsfeeds. Here and throughout history, movements, change and widespread uproar are often catalysed by a single event or individual.

A Bruddah’s Mind (2022, UK), directed by Déo Cardoso, is a timely reminder of how this can occur. It opens with a shot of the protagonist, a member of the student council at his school, Escola Major Andrade, putting up posters under the palpably scorching heat of Brazil’s northeastern state of Ceará. The poster reads ‘Call For Panel – Education’., Thus, Cardoso announces the precocious figure of Saulo Chuvisco (Lucas Limeira); his dark afro, bespectacled, inquisitive gaze and geeky, introverted appearance houses his determination for change, in response to what he observes as inequality, mistreatment and injustice faced by Brazilian Africans. A Bruddah’s Mind is a small-scale, independent film by a Brazilian director, Cardoso, who mentions in a Q&A after the screening at the British Film Institute that, at times, he didn’t think his film would be seen by the public. Albeit modestly made, A Bruddah’s Mind peers honestly and intensely into the humble beginnings of a youth political movement, which becomes an organised cause to shift the treatment of Africans in northeastern Brazil.

Recalling figures from  Martin Luther King and Malcolm X to Nelson Mendela, A Bruddah’s Mind examines an individual’s infectious conviction in his knowledge of injustice, and his incorruptible drive to overturn such injustices and lobby for change. Angered by how his Caucasian teachers and school staff hurl racist slurs at him, and lamenting his school’s near-uninhabitable physical condition, Saulo live-streams for an online audience – capturing the disgusting state of the toilets, the misuse of academic resources, even shoving his phone in front his teachers when they say something racist. In certain shots, he seems disrespectful, unrelenting, even reckless in his actions. Yet in all of Saulo’s naivety and political inexperience, his altruistic, passionate impetus to be heard and affect change shine through. Cardoso shows us the simplicity of where pure activism and political change should come from. It certainly should not come from purely self-serving or financially incentivised political ambitions.

Against the backdrop of the Black Panther movement, Cardoso serves us a Christ-like figure, while paying respect to Fred Hampton, deputy chairman of the Black Panther Party. A martyr like Hampton, Saulo is shot dead by police as he makes a run out of school grounds. He is the image of sacrifice, selflessness and servitude to a larger, global cause. Like all ambition and activism, Saulo’s vision is plagued with adversity: in an attempt to silence him, for example, the school threatened him with expulsion. The individual’s ideology, conviction and fervour organises a force and collective. At the height of the protest, viewers are met with the imposing presence of a chant and a galvanising bass line. As Cardoso injects scenes with snippets of other protests, the viewer’s eyes are subject to brutal images of teargas, water cannons and riot shields. Individuals like Saulo leave behind a thread that continues weaving itself into a larger, more robust political fabric that eventually becomes a revolutionary presence, unable to be silenced or contained.

After both watching A Bruddah’s Mind and listening to the BFI’s Q&A, the most lasting impression of the beauty of African identity, for me, was the audience’s response to Cardoso, when he commented on what he thought of African spirituality:  ‘Ashe’, the cinema roared – a West African term for the divine life force and vitality through which we can produce change.

A Bruddah’s Mind is a great feat of Afrocentricity, and understanding of African diasporic experience and Black identity. It peers into the conditions of the mistreated, and honours the power of the individual and its perpetual dialogue with the collective, such that no matter how daunting the state of affairs, how second-guessed and lofty the political ambition, when conditions are ripe, a sizable movement naturally erupts. In the context of Brazilian history and Black politics, Cardoso does justice to a prolonged, generational struggle, and the passing of the baton to the youths today, who shoulder the fight for equal rights.

Thanks to the BFI Southbank for providing tickets. The UK premiere of A Bruddah’s Mind was shown at BFI Southbank on 22 January 2022.