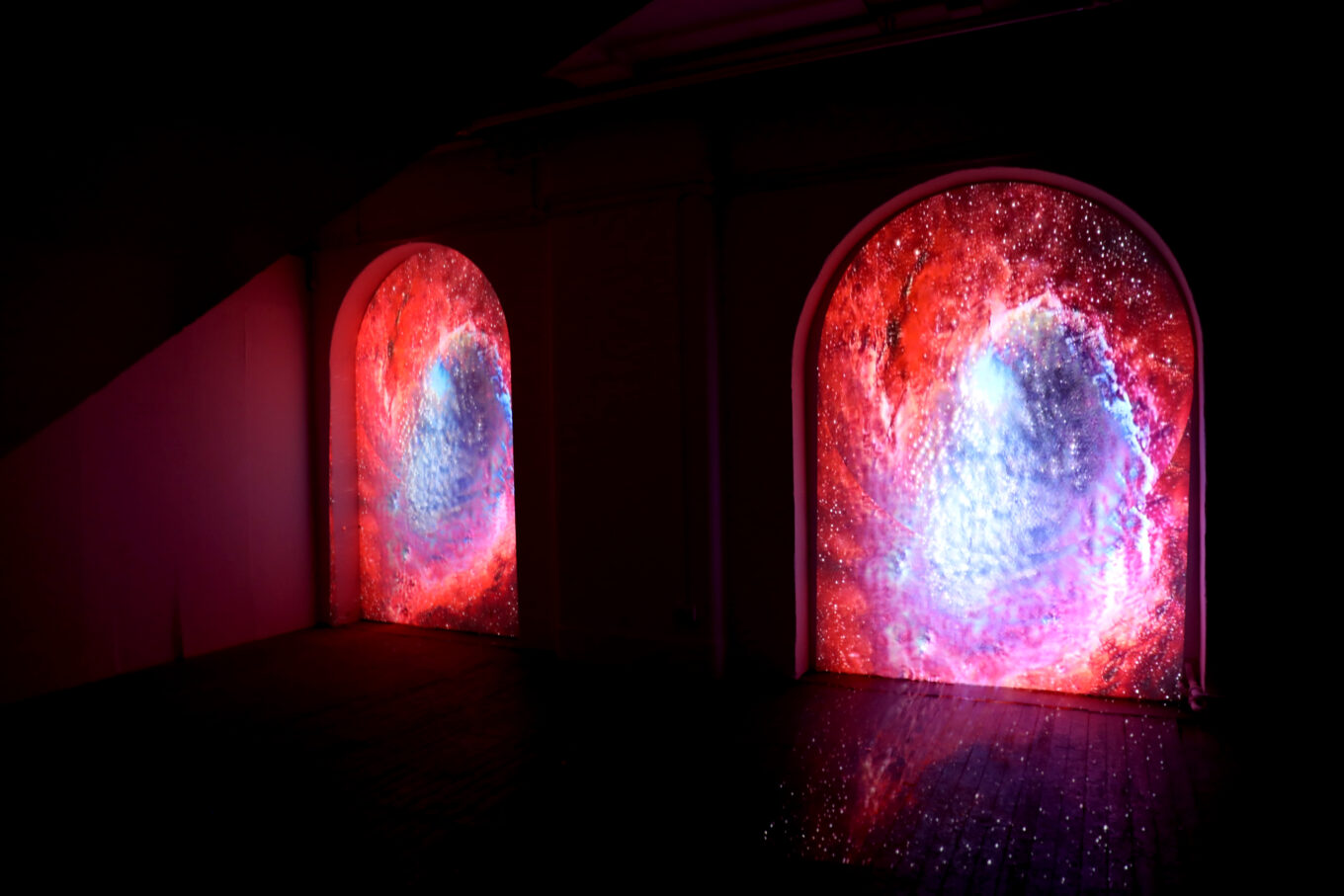 ZOSIA KIBALO interviews artists featured in Fishtank, a group exhibition at Penarth Centre put on by second-years students at the Slade School of Fine Art. The artists reflect on the experience of putting on this group show and provide an insight into their individual practices.

‘These pieces are great conversation starters’, says Ann-Maria Cadell, her gaze scanning the room, stopping briefly on her classmates popping champagne. Although this night brought the end of Fishtank, the intimate act of undressing the space brought back memories of the beginning, the challenges and opportunities that the empty room presented Cadell and her friends. ‘The space was a starter in itself’, says Henry Galano, one of the curators of the show. From the moment they stumbled across the white walls of the Penarth Centre everything seemed to fall into place. The exhibition was funded, organised, and created by students exclusively. Taking this risk meant that the artists could experience the independence of creating something from scratch and of transforming the space into a collage of artistic expression and a multiverse of narratives on their own terms. Faced with the challenge of bringing together a group of artists varying in techniques and themes, Galano, together with Kevin Yang and Isidore Bishop-Sauve, played around with what Cadell would call ‘the penetrable whiteness’. ‘It’s all out in the open’, laughs Cadell.

In pieces by Cadell and Lily Petch, empty space is presented as an entirety in itself. Fascinated by the notion of blankness, Cadell confronts it in her piece The Lake. Using prints of images taken at a lake near her home, she contemplates where it begins and ends, whether it is penetrable or impenetrable. She finds it ‘to be a silence containing all unheard’. This feeling of suspense provided by new beginnings is similarly a source of inspiration for Lily Petch. Petch displayed Four Types of Weighing, a piece reflecting on the intention of language and cyclical time. The motion of imprinting onto aluminium allowed her ‘to trap [her] stream of consciousness in a frame’, with the ‘feeling of density and the permanence of metal’ aiding her in highlighting the purpose and the power of language. Her choice to imprint linear and oblique shapes encourages the audience to reflect on the nature of linear time, in which a restart button simply does not exist.

On this tricky journey through time, we desperately search for anchor points, propping up fragile, fleeting moments of our lives. According to Ed Burrell, objects are the perfect medium to help us create a safe space, a home within this chaos. In his artistic process, using tiles, wood, muslin, paint and ink, Burrell ‘celebrates items of care for those who are present’. Items such as his sink, entitled Theresa watched me from the kitchen doorway, utilise everyday objects, some of the few constants in our lives. Seemingly passive, they stand in the corner witnessing the messiness of our routines, taking in all the dinner chatter, silently suffering from spilt coffee. As I looked at the sink I couldn’t help but think what imprint will be left on it to carry the memory of being in Ed’s care. Objects absorb our lives, becoming ‘devices of support, guarded custodians of momentary meaning’, says Gabriele Ciuli. We are mutually dependable: objects actively create a space for us to live in, and in turn, we give them the inherent meaning that keeps them alive.

The show emphasised the ways in which objects are never separate from human influence. They experience constant repurposing, rewiring, remodelling – even though you may be part of an object’s journey, you are definitely not the end of it. Hana Yun-Stevens takes this idea even further, reflecting on the context of objects. Instead of imprinting a new meaning on them, she facilitates a space for the items to reveal their individual histories. Yun-Stevens utilises domestic objects found in residential areas as ready-made art. Seeing herself as a mediator rather than a creator, she skillfully amplifies the multitude of narratives that each object carries within itself. ‘Something as simple as a page of a book about three little pigs can open a whole thought process about what it means to build a home, to sustain that home’, she says. If only we started seeing what the world already has to offer, maybe we wouldn’t be so insistent on flooding it over and over again with a new wave of ‘everything’.

‘We are a part of this world’, stresses Kexin Jiang. According to Jiang, nurturing sympathy towards our surroundings offers an alternative approach to the current political environment. Through theatrical work we are able to jump out of the convention and look past our own ego. Jiang views the vicious taxonomy of human and nonhuman as unproductive and limiting. By putting on wearables in artistic performance Garden Trialogue: Purge the Teleology Demon!, Jiang ‘almost sees [themselves] as an object’.

Grace White uses layered paper, photographic montage, and drawing, creating what she calls ‘anxious landscapes’. Her work portrays a sense of urgency, a reflection of the constant shifts of an urban landscape. We live in a land of cranes and closed pedestrian crossings, constantly upgrading, stuck in a loop of constructing and deconstructing. White tears the familiar and glues together a peculiar world that reflects on our reality. A sense of disruption is crucial in White’s artistic process. She sees collage as a way of ‘facilitating juxtapositions of things that shouldn’t be together, yet compliment each other’. The act of tearing paper is cathartic, with a whole universe of possibilities seeping through its rips and cuts. Just like Jiang, Yun-Stevens and Petch, she draws attention to the act of creation. White destroys in order to build, breaks to fix; being so familiar with ruin pushes the red button before anyone can stop her.

Allowing us to explore the space behind creation, hidden behind a black curtain was Henry Galano’s immersive installation, featuring a vast collection of galaxies, rising only then to break down. Inspired by science, architecture and mythology, Galano explores the world of information, stars and black holes. He taps into the astrological realm by ‘using AI and drawing to create synthetic celestial forms’, seeking  to question the ‘boundaries of digital and physical space, and how we interact within these realms’. Galano facilitated a space for us to ask big questions about our constant entanglement within the digital.  His AI program produces the galaxies at random, not aware of the image it’s creating, spitting it out without filter.  Allowing another player, especially one that is non-human, into the process of creation, can bring with it great risks. Yet, as Galano proves, it pays off. Letting materials be unpredictable, to have agency and be performative in their own way, pushes the boundaries of traditional art forms. In her piece WATERFABRICSKIN (face), Ruby Waterhouse challenges the sanctimonious nature of traditional art making. She is interested in ‘abstraction through editing, installation and layering, all while keeping drawing at the heart’. Translating performances into ‘video drawings’, she explores ‘different materials and how they interact with the body to change shape and form’.

‘This is a gateway’, Galano explained to me. ‘It’s the first but definitely not the last show’.  Fishtank seemed to illuminate to those exhibiting where they wanted to take their practice: Yiang desires to locate techniques that will help him achieve more precision;  Galano dreams of a room facilitating a more immersive experience; Waterhouse wants to get a bigger projector for her next project. However, as a spectator, it was an immense privilege to see the practice of these emerging artist growing and developing live before my eyes. Listening to their stories and interacting with this lovely bunch both inspired me and made me reflect on how much we can do if we allow ourselves an ounce of confidence in our own strength and ability to create. At the end of my deep dive into the Fishtank, just before I left to come up for air, the artists asked me to snap a group photo of them. I really hope that down the line, they will look at it and smile, reminiscing the very beginnings of their journey.