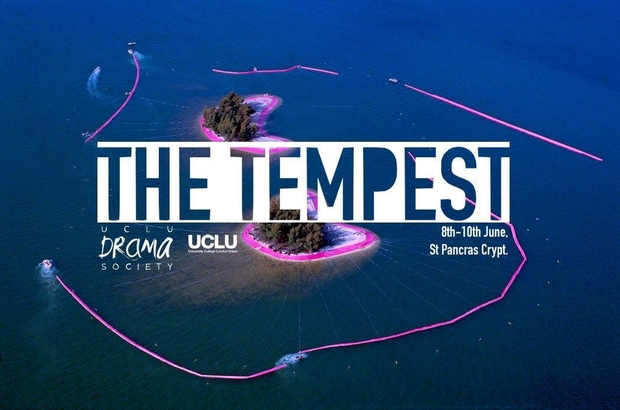 The isle is full of noises… In this case the noise is soft Latin jazz, coming from the murky crypt under St Pancras Church. In this site-specific production of The Tempest, the brick underground is unnervingly at odds with expectations of island paradise. This only made the set more magical, as the colourful aesthetic of props and costumes jumped out of the darkness. This brilliantly conceived production directed by Finn Burge shows just how well suited the play is to a promenade style, as well as drawing out all the play’s subtleties, both comedic and tragic.

The audience is implicated and immersed in the narrative as we are led through the tunnels to different scenes. This form of theatre is necessitated by the lay out of the venue, but worked perfectly with the play and utilised its full potential. The magic of the island unravels both before our eyes and behind our backs: at one point, we turn from Matt Turbett’s grotesque and hilarious Gollum-esque Caliban to find a previously empty corridor full of unconscious Milanese nobles. The audience has an consciousness of their eerie lingering presence while watching Ferdinand (Tanwen Stokes) framed in despair and confusion under an arch to Ariel’s (James Cassir) haunting song. In this way the uncanny and the comic are held level with one other as the shipwrecked nobles awake with a tightly choreographed yet seemingly spontaneous explosion of spluttering shock. The tunnels allow the actors free access: Prospero can appear behind the audience out of thin air; Ariel can glide past an arch in our peripheral vision, reminding us of his looming omnipresence. In the later chase scene, the passages are used for comedic slapstick reminiscent of Scooby Doo. The theatrical space is stretched and explored – and it, in turn, stretches the play itself.

The promenade style also necessitates a degree of audience participation, as the group needs to be herded between scenes. Rather than an obstacle, this is embraced: Prospero’s directing of the audience plays into his controlling nature and he presents his intricate plan like a child showing off a toy, telling the audience to ‘now watch this’. The audience is present only when allowed to be: private scenes are private, but characters appealing to spectators is common and adds a charm and intimacy to the production. We are laughed at and with, used artfully by the actors as both prop and character, whether it’s carrying Prospero’s robes or having a Miles Blanch wrap himself around your leg. This is audience participation at its most lighthearted, in parts equally discomforting and delightful, making everyone feel complicit in the achievement of the show.

A defining characteristic of this production is its neat and simple subversion of conventional gender behaviours. The Miranda/Ferdinand strand of The Tempest’s narrative is familiar – the heroine is unexposed to the world, the hero is foreign and wonderful, coming from far away and introducing the until now alien notion of sexuality. Now we have a shy male Miranda (Uri Inspector), and a sexually confident female Ferdinand (Tanwen Stokes). Miranda’s garlanded hair, eye liner and long colourful tunic over a pair of boyish beige shorts nicely complement his modesty and youthful awkwardness, while contrasting with Ferdinand’s overtly sexual dress. Dating roles (if the couple can be thought of as ‘dating’) are reversed as Ferdinand is active and persistent in her attempts to seduce Miranda despite his embarrassed curiosity.

But this male discomfort and sexual modesty feels less familiar than the feminised Ferdinand – the seductress is not an unusual stock role. We do not often see sexually passive or coy men on stage, or in the rest of the arts for that matter. This perhaps illuminates a fixity in modern notions of masculine heterosexuality, where female heterosexuality has a wider range of depictions in culture. The shy man is portrayed as effeminate whereas the sexually active woman is just another characterisation of female heterosexuality. Though women are undeniably afforded less privilege than men, in Western art it seems rare to find shy or naïve men in sexual situations – if they are, they are humourised as in examples such as The Graduate, and indeed this production. Both powerful and innocent women are sexualised by the male gaze in our culture, but it would seem that only confident men are in the same way: something shown precisely by a comparison of this production to the traditional gender casting. This says as much about depictions of – and our own cultural expectations of – masculinity, as it does about the ease and persistence with which our society and its art sexualises women. This production playfully makes the audience aware of our own prejudices and assumptions – Miranda is not gay, just shy and inexperienced; as Ferdinand attempts to seduce Miranda, she is both a sexual woman and a vulnerable one at the same time.

But the show’s gender bending is not so pointed, rather it was the subtlety with which it tackled the gender divide that made it so special to watch: it poses a question but resists making a statement. This subtlety is like all of this Tempest’s elements. The production treats each of its facets delicately, allowing no opportunity to go missed. The net result is a thought-provoking piece, one that balances its niches with a focus on joviality and hilarity. If anything exemplified this perfectly, it was Prospero’s moving epilogue being drawn to a close by a push of a button and instantaneous cheers, music and explosions of glitter cannons.