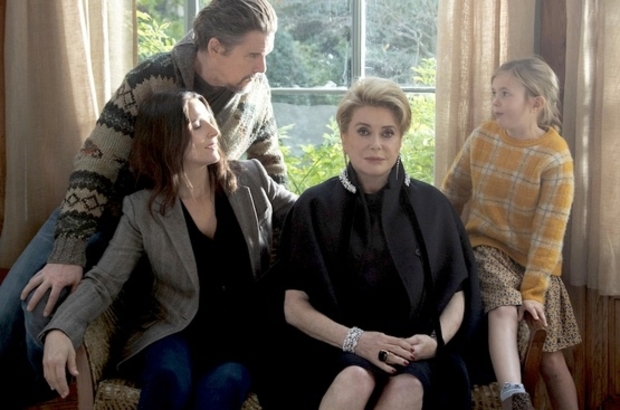 What is it that holds a family together? The blood we share? The time we’ve spent together? Or merely some series of performances we feel an obligation to fulfil? Anyone familiar with director Hirokazu Kore-eda’s work will be unsurprised that these questions form the core of his latest feature, The Truth (2019), wherein the fraught relationship between diva-ish elderly actress Fabienne Dangeville (Catherine Deneuve) and her daughter Lumir (Juliette Binoche) is the focus. Sadly, the film fails to deliver Kore-eda’s usual depth of emotional truth, never quite reaching its full potential, feeling more like a hollow reflection on the director’s usual themes.

Deneuve (who I’m happy to report seems to be having more fun than she’s had with any project in the last decade) is utterly believable as Fabienne, trailing a heavy cloud of cigarette smoke, perfume, and whisky in her wake. She is demanding, unapologetic, and honest to the point of callousness, but occasionally we do catch a glimpse of her vulnerability. This role is of course no stretch for Deneuve; in fact it seems tailor-made for her. The film unapologetically plays on the similarities between the two; Fabienne is not only Deneuve’s middle name, but the character is also a two-time César winner, once starred in a film called ‘Belle de Paris’, and clearly holds a grudge against Brigitte Bardot. This similarity isn’t necessarily a bad thing; in fact, the film’s best comedic beats play off it. However, it ends up feeling as though The Truth is too reliant upon Deneuve’s presence, or indeed, that it gets distracted by her on its way to anything truly meaningful. Binoche and Hawke are of course heavyweights in their own right, but one could be forgiven for overlooking them, at the mercy of a screenplay which was clearly intended for Deneuve and Deneuve alone.

The Truth primarily follows Lumir as she returns to her mother’s house in France for the first time in years with her husband (Ethan Hawke) and daughter (Clémentine Grénier) to celebrate the release of her mother’s memoir. Lumir’s relationship with Fabienne has clearly never been an easy one, unable to help feeling unloved by a mother who prides her career above all else. Fabienne may be candid about her shortcomings to her daughter, but is incapable of doing the same when it comes to writing her memoir, preferring a certain rose-tinted revisionism instead. It becomes evident that almost everything is a performance for Fabienne, even her harsh candour.

Amidst the family drama, Fabienne has been cast in the complicated sci-fi film ‘Memories of My Mother’, alongside the up-and-coming Manon Lenoir (Manon Clavel), which centres on a mother who never ages, courtesy of time spent in space. Fabienne plays her aged daughter, having remained on earth, only able to see her forever-young mother every seven years. The parallels here are obvious — slightly too obvious — although I strangely found myself enjoying this film-within-a-film more than The Truth itself; it’s the closest Kore-eda comes to the kind of depth of emotional truth he seems to be searching for. Sadly, it still feels as though something is missing, or that something has been misplaced; The Truth never seems to reach past the point of mediocrity, with only occasional glimpses at the better film it could have been.

To attribute The Truth’s shortcomings solely to its overindulgence of Deneuve, however, would be remiss (I mean, come on, who wouldn’t overindulge?). This being Kore-eda’s first venture into filmmaking in a language other than his native Japanese, there were undoubtedly a number of logistical issues. Writing a script in Japanese, only to have it translated into another language, and then directing an entirely French crew and a mixture of anglophone and francophone actors by means of an on-set translator can’t have been easy; inevitably, something was lost in translation.

Despite these logistical issues, the film feels thoroughly French, its lithe, autumnal feel reminiscent of the usual work of Olivier Assayas in particular. However, much like Assayas’ recent feature, Non-Fiction (2018), The Truth fails to reach its full potential. What could have been a strikingly poignant meditation on the performative and ritualistic aspects of familial life ends up a sub-par family dramedy set to what sounds like royalty-free stock music.

The Truth was released in the UK on 20 March 2020 and is currently available in the mubi library.