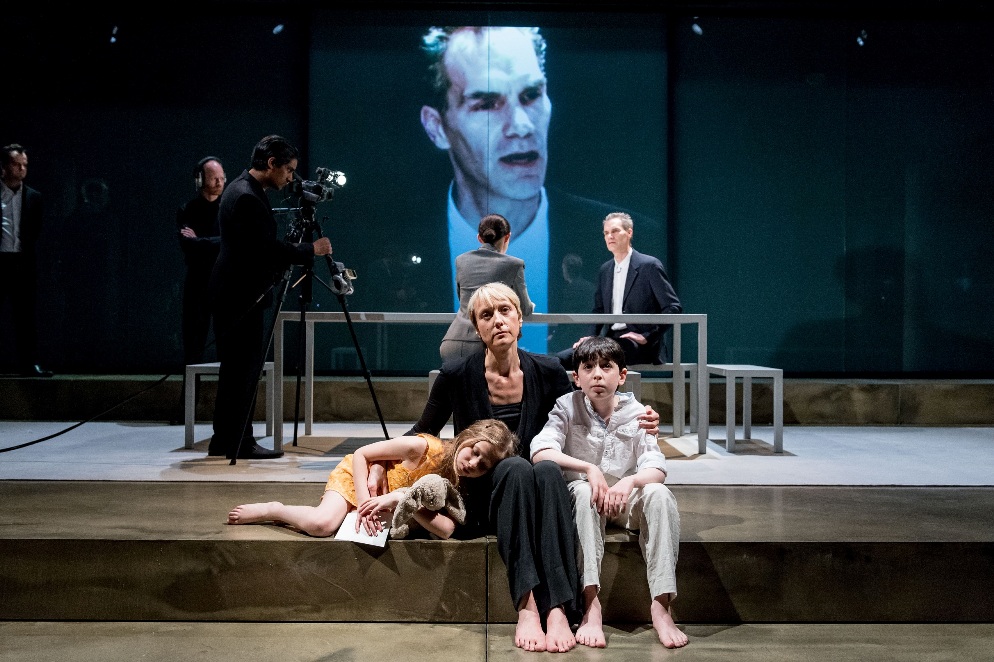 In this production, Aeschlyus’ original trilogy is expanded with the addition of a first act, which depicts Agamemnon killing his daughter Iphigenia on the words of a prophecy. The performance is moved to a 21st Century abstract location where the family is constantly recorded by the press and their actions are broadcast. This allows the story to pass into record—and legend—before the audience’s eyes.

The show runs close to 4 hours – or 3 hours, 39 minutes, 12 seconds to be precise. Timing is a precise part of this adaptation. The seconds left in intervals are counted down and characters’ times of death are displayed to the second on an LED screen which also clinically details pieces of evidence.

In the final act, there is a change of scene which alters all the events that have come before. The validity and truth of the entire performance is called into question: is it all the result of a troubled, grief stricken mind? The consequences of grief are considered throughout the evening, leaving audiences questioning if anything can ever truly be right or wrong.

The classic Greek chorus, a traditional representation of society and their response and intervention, is dropped. However, instead Icke engages the audience with the primary role asking, ultimately, for a vote on Orestes’ innocence or guilt having “witnessed the entire story”. Icke puts justice itself on trial throughout the evening’s events.

Icke’s production also scrutinises patriarchal undertones of Aeschylus’ plays, questioning why a mother must die for killing a father when a son does not have to die for killing his mother. Is a mother’s murder less than a father’s in a society where Athene declares: “we favour men in all things”? Is it because Orestes is favoured by the Gods, which he proclaims, through his modern prerogative, he doesn’t believe to be the answer? Or is it because Orestes is mad, inventing a sister, Electra (played with terrific intensity by Jessica Brown Findlay), who the court claims there is no record of, to dispel his own guilt? The audience is presented with the possibility that the whole ‘Oresteia’ is an elaborate coping mechanism for grief and guilt.

Luke Thompson’s Orestes is realistically distraught and never reliable, contrasting beautifully with his ‘parents’: Angus Wright’s torn Agamemnon, a natural leader, paired with Lia Williams’ strong and amazingly human Klytemnestra. It is an honour to Williams’ performance that Klytemnestra is never simply a monster or a villain of the piece. She struggles through the press conferences of the ten year Trojan War with a fake exuberance and honestly believes she is doing right when killing her husband and declaring ‘this house is set in order’.

This is not a light story and is never treated as such. The success of the evening owes a great deal to Natasha Chivers’ chillingly precise lighting and the minimalist staging. With sliding screens that click between transparent and opaque, this is a murky retelling of events where nothing is ever entirely certain.

The different acts gather pace and swap genres with the third act, in particular, using horror film motifs to great success. Still grey outlines of Orestes and Electra at the window of their childhood home and blackouts are used to evoke the genre; reminiscent of Robert Icke’s Room 101 scenes in his adaptation of Orwell’s ‘1984’.

This ‘Oresteia’ is undeniably powerful with its greatly emotive scenes in the first hour and the last forty-five minutes; but its lengthy duration is excused by the huge breadth that it covers. The narrative is complex, yet never confusing due to the humanising way that Icke presents it. This is Greek Tragedy as it should be—it makes you feel something and leaves you asking questions.

My advice? Get tickets now, whilst you still can.

‘Oresteia’ is showing at the Almeida Theatre until 18th July. For more information on the Almeida’s Greeks season click here.