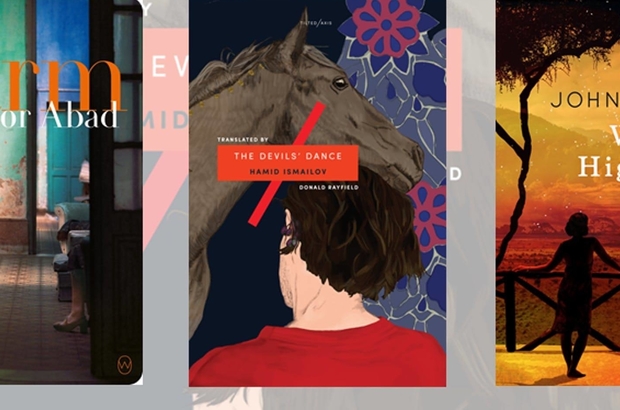 When asked why he chose to engage so deeply with the political in his novel White Highlands, author John McGhie responded in his characteristically self-effacing manner: ‘if not us… well, who else?’ He reflected a sense of obligation, of necessity almost, for fiction to engage with politics. While fiction certainly is not required to mingle with politics, when it does so successfully it can yield remarkable results. In an evening of discussion at Waterstones Gower Street titled ‘Turning the Political Into Fiction,’ four authors shared insights into the role of the artist in politics, as well as the power political works of fiction can have in the modern world. While their novels and concerns were often dissimilar, they shared one common thread: the idea that political fiction can be used to promote understanding and unite people in turbulent times.

British novelist Georgina Harding underscored the ways in which political fiction can help us feel less detached from political issues that would otherwise feel remote. In her discussion, Harding recalled cycling through Romania as a tourist in its final years of communist rule, describing conversations with citizens who seemed to be drowning in the stories they had to repress. Painter of Silence captures this nation’s glum grey years under communism, with Harding unloading many of the appalling stories she heard onto her delicate prose. Her novel emulates a coarsening of humanity where basic respect for human life and dignity is abandoned. Land of the Living, with its clear, rhythmically measured writing, similarly gives way to great depths of agony and alienation.

Like many of the best political novelists, Harding zeroes in on the effects of politics on the lives of her characters rather than on the political ideas themselves. She brings her characters and their pitiable settings to life in heartrending ways, taking her readers to a place of understanding and identification with them. In awakening a deep sense of empathy, she bridges the gap between our lives and others radically different from our own. It would be idealistic to think Harding’s novel – or any novel – will drastically change the course of any major political conflicts taking place today. But Harding’s novels can teach us empathy in a way news broadcasts and statistics can’t. If we believe in the power of individuals in politics, and we believe individuals can be shaped by great books, then Harding has created a masterpiece that can contribute its small share to the creation of more humane societies.

Héctor Abad built on Harding’s idea of understanding, suggesting the ways fiction can stimulate less feverish and more productive political discussions. In The Farm, he chose the small, personal microcosm of a family estate to discuss wider issues surrounding Colombia’s political turmoil. Like Harding, he makes these issues come alive through his characters, but also emphasises the pluralistic perspective that fiction can infuse political discussions with. Abad warned about the dangers of ‘sinking into rancour’ with political issues of a momentous nature, issuing a wider cautioning about resentment and the inability to understand those whose ideals do not match our own. And indeed, his novel burrows deeply into the minds of all sorts of characters and presents their views – some Abad agrees with, and some which he does not – in a masterly demonstration of how fiction can be used as a tool to break down increasingly polarised political rhetoric. Avoiding the didacticism that can often characterise political texts, Abad’s multiplicity of perspectives in The Farm encourages political discussions that start from a point of understanding rather than animosity.

Hamid Ismailov’s fiction also strives to bring people closer together, particularly those in repressive states. Discussing his new novel, The Devil’s Dance, he recounted his experience going into exile. Forced to flee Uzbekistan for his ‘unacceptable democratic tendencies’ – as the Uzbek state artfully put it – Ismailov was just one of many writers in his country to be forced out. The Devil’s Dance follows a real-life Uzbek writer and his experience in prison. But Ismailov’s novel, in interweaving the writer’s life with those of characters in Uzbekistan’s past, moves far beyond his character’s prison walls. It becomes a vivid testimony of what he refers to as his ‘wretched people and their errant history’, and one that is wholly arresting: at times soulful and lyrical, at times defiant and rebellious. Resistive letters and anecdotes from Uzbekistan’s political prisoners are as much a part of the novel as delicate descriptions; one character’s singing, Ismailov tells us, is as ‘full of tenderness and shyness as the red poppies on the mountain slopes, as nimble and youthful as a vine.’

At the event, Ismailov spoke in a sombre voice about censorship and repression in his native country. He discussed the true danger of repressive states: that they produce what he calls ‘brainwashed’ societies. Ismailov’s novel is a way to reopen debate, to open up readers to scrutinising the political world around them. He uses fiction to say what otherwise can’t be said in Uzbekistan, to fight against the preferred weapon of those with absolute power: silence. And in sweeping so widely through Uzbekistan’s history, Ismailov’s book reads almost like an anthem: a song to bring together all those bruised by years of repression.

McGhie also wanted his novel to bring past instances of oppression to the forefront, bridging the gap between past and present as well as different cultures. When asked why he chose fiction as his vehicle to raise awareness of British atrocities during Kenya’s Mau Mau Rebellion, journalist John McGhie talked about ‘bringing colour to the past.’ It is easy to distance oneself from pictures of awful acts in black and white or sepia, he argued, as our response is more tempered. When pictures are colourised, we face them in their full force. By creating characters we could empathise with, and families not unlike our own, McGhie hoped to unbury this piece of British and Kenyan history intact, ensuring none of its tragic realities were lost under the accumulating dust of time.

McGhie digressed, speaking of how Britain as a nation is at a junction in its life where ‘we need to ask ourselves who we are, where we’ve come from, and where we’re going.’ In other words, we are at a crossroads where we need to redefine our ideas of what it means to be British. White Highlands, in its attentive rendition of this dark part of Britain’s past, looks to form part of this national conversation. Political works of fiction can be a launch pad for some of the most important discussions about national identity that we need to engage in, and McGhie opens up a debate that yearns to heal old wounds and make for a more conscientious and inclusive society.

The unifying thread in these authors’ discussions was the power of fiction to spur empathy and bring people together. Although it is by no means always required to, it was made clear that fiction can open up portals into minds completely unlike our own, sometimes enlightening us and sometimes shocking us, and almost always making us more understanding towards others’ ordeals. It is undeniably hard to argue a direct cause-and-effect relationship between fiction and politics: books don’t start or halt wars. But at its very core, politics is shaped by people. And people, sometimes, are shaped by extraordinary books.