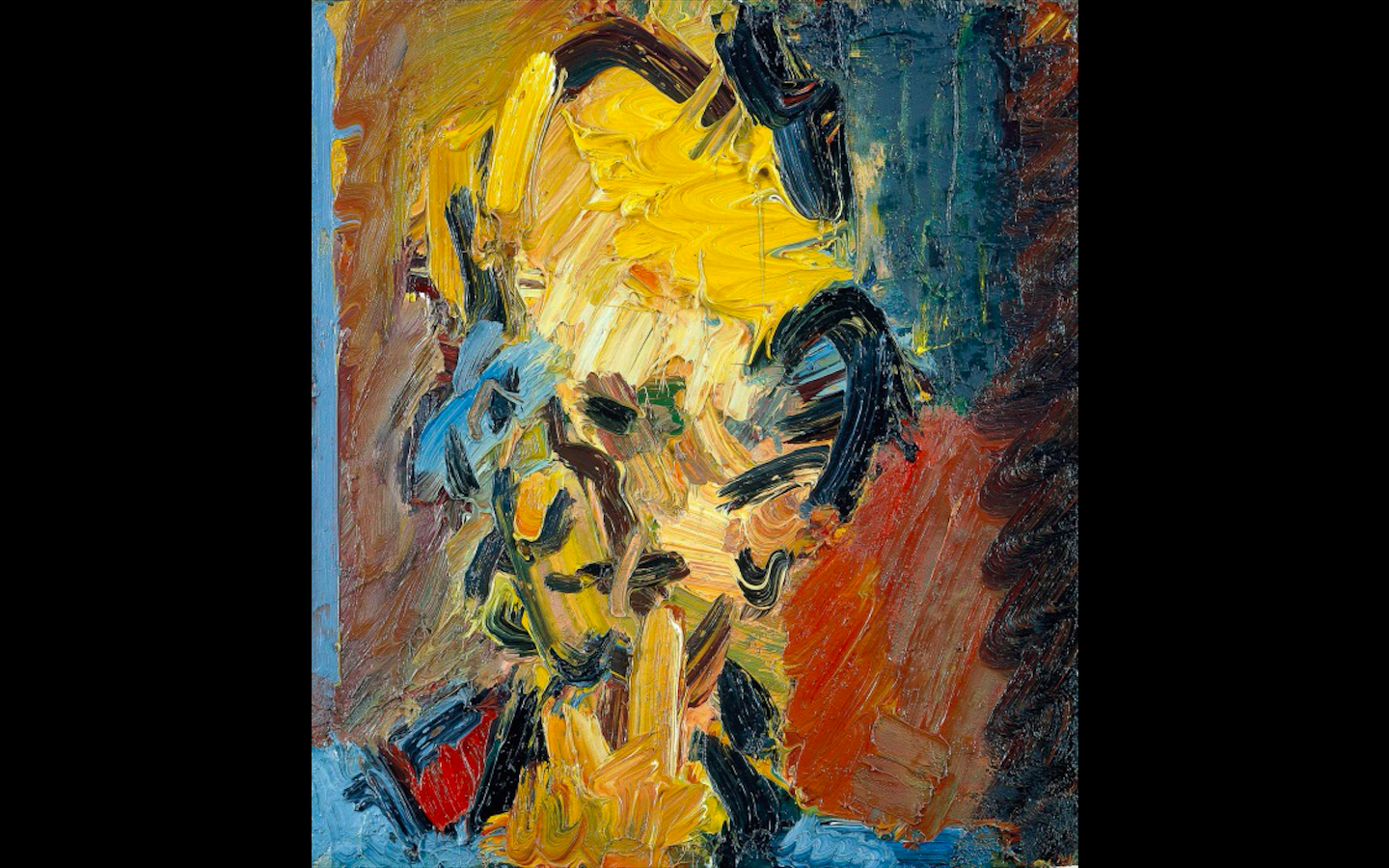 In his chronicling of the passage of time, Frank Auerbach fashions tactile works of bygone realities. His uncompromising depictions of people and urban landscapes are revered as some of the most evocative of modern paintings. Blotting, scraping, and reworking each canvas ten, fifty, and, on occasion, in excess of two hundred times, Auerbach crafts the fleeting fluctuations in each individual character and environment. Compelled to achieve a synthesis between physical elements and intangible feelings, he paints 365 days a year, taking months to conceive the finished version of a canvas. A dense, vivacious image emerges in time. Unlike the versions that preceded it, this final image remains intact. The fluid, yet inherently static, mass of vibrant pigment is not scraped away by a plate knife, but is left unscathed, recording for posterity Auerbach’s distinct impression of a singular moment. It is this cyclical process of creation and destruction that begets Auerbach’s artistic innovation.

Capturing the subtle evolution of mankind, Auerbach has achieved international acclaim. Sought after for his abstract representations of urban and suburban reality, works by Auerbach are hallmarks in many private collections. Fetching competitive prices in the contemporary art market, his works are prominently featured at Sotheby’s, Christie’s, and Frieze, amongst others. Yet, this fascination with Auerbach’s mode of depiction extends beyond the private market and into major cultural institutions. One such institution touting Auerbach’s artistic genius is the Tate Britain, which opened a large-scale retrospective on the artist on 9th October 2015. The show, simply titled ‘Frank Auerbach’, chronologically traces the pervasive themes in the artist’s oeuvre.

A product of Frank Auerbach and Tate Curator Catherine Lampert’s collaboration, the exhibition is organised by decade rather than by theme. This objective partition aids the viewer in interpreting Auerbach’s work as his artistic mode of depiction evolves, and, ironically, softens with age. In Auerbach’s early works, the dense sculptural physicality of each work is visually abrasive. Saturated with dark pigments, his early works are amalgamations of pigment. The haunting faces distinctively marked with gouged eyes seem to cry out, uttering incoherent phrases. These works, such as ‘Head of Leon Kossoff’ (1954), may allude to Auerbach’s troubled past, and his escape from Nazi Germany at the tender age of eight. His early art may be interpreted as a coping mechanism, a means of exorcising the terror that he once suppressed.

Differing drastically from the works he created in the 1950’s and early 1960’s, Auerbach’s work post 1960 is characterised by a gaiety and fanciful lightness. The physicality of the medium and the hand of the artist are still readily apparent; however, his works begin to imply physical depth through a series of geometric forms and planar divides. From the 1970’s, pieces by Auerbach feature radical colour combinations. These uncanny combinations are emotive; they convey through their absurdity the reality, the indescribable essence, of the environment in which the art was created.

Comparing his canvases ‘Morning Crescent’ from 1965 and ‘Primrose Hill’ from 1978 illustrates this divergence in style. The former work is defined by its muddied colour palate and modelled surface. ‘Morning Crescent’ retains the dense tactile quality of Auerbach’s early works while incorporating abstracted elements of geometry that feature prominently in the artist’s later works. However, the latter canvas, ‘Primrose Hill’, more fully realises the potential of geometric abstraction. It is an unshackled depiction of the artist’s experience in nature. Form and colour are employed to evoke a particular feeling, to convey Auerbach’s disposition as well as the mood of the present environment. ‘Primrose Hill’, and like pieces, lack the entrenched sadness that pervades his earlier works.

While Auerbach’s application of paint alters stylistically with age, his thematic concentration shifts little. Investigating the same sitter or landscape- typically located near his studio in Mornington Crescent—Auerbach emphasises the distinct evolution of each subject, which mirrors his own artistic progression. Over decades, he paints each subject from a myriad of vantage points, shifting tonal palates and varying his application of paint to match the changing environment. He gradually notes the devolution of his surroundings, the encroachment of industrialisation into daily life, and the subtle effects of age on the mental psyche and physical mass of an individual.

By observing the repetition of specific subjects and sitters in Auerbach’s work, one identifies a constant: Auerbach is fixated in recording the immediate state of being. Lampert, the exhibition curator, emphasises this fixation by arranging the final room in thematic clusters, which group together canvases from throughout Auerbach’s career. After viewing the exhibition it its totality, it appears that Auerbach’s constant improvisation with and iteration of subject matter results from his struggle to produce canvasses of honest, rude, and uncensored realities. The artist himself confesses, “What I am trying to make is a stonking, independent, coherent image that has never been seen before…that stalks into the world like a new monster.” This aim to paint in absolutes, to fashion each canvas as an independent entity, to record transient experiences, and to create in a manner that is intrepid and profoundly original is stressed throughout the exhibition.

Frank Auerbach can be seen at the Tate Britain until 13 March 2016.