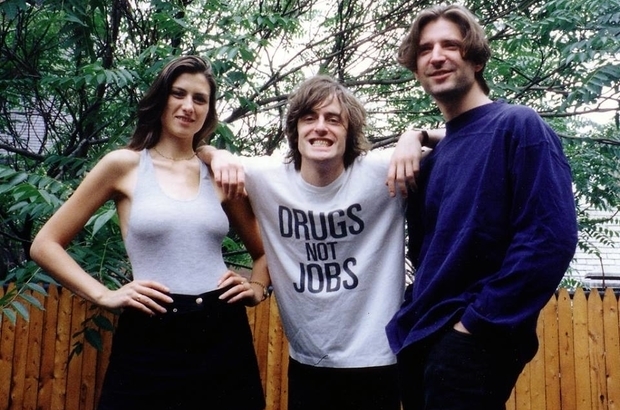 Rare is it to find an album that resonates so strongly across time and space: Ladies and Gentlemen We Are Floating In Space is one of these. Upon its release, critics and music fans alike were struck by its brilliance, achieving chart success, rave reviews and winning NME’s Album of the Year in 1997, beating both Radiohead’s OK Computer and The Verve’s Urban Hymns. Spiritualized’s victory over the latter was bittersweet – Ladies and Gentlemen was inspired, supposedly, by frontman Jason Pierce’s split from keyboardist Kate Radley, who had secretly married Richard Ashcroft of The Verve in 1995, in the midst of Pierce’s heroin-addicted slumber. It is an album about heartbreak and its ability to transport us into an another realm: being in love does feel like being in an alternate reality, floating in outer space. On this record, Pierce drifts through the drug-fuelled recesses of his own mind, an astronaut marooned in space. But it is much more than a ‘break up album’. It is an album about voyaging; the title is a line lifted from Jostein Gaarder’s philosophical novel Sophie’s World:

Only philosophers embark on this perilous expedition to the outermost reaches of language and existence. Some of them fall off, but others cling on desperately and yell at the people nestling deep in the snug softness, stuffing themselves with delicious food and drink. ‘Ladies and Gentlemen,’ they yell, ‘we are floating in space!’ But none of the people down there care.

Pierce presents a musician and philosopher, venturing to the ‘outermost reaches’ of what it is possible to create, away from the ‘snug softness’ of fellow 90s bands Oasis and Blur and into the musical unknown. Indeed, Ladies and Gentlemen is an album that evades categorisation. It is not a typical psychedelic record — at times it feels more like a classical symphony or a collection of futuristic psalms, floating over krautrock drones, free jazz and bluesy harmonicas. Though the record’s altitudinal, celestial lyrics create the atmosphere of a space-rock record, it is also deeply private and introspective. Pierce begins from personal experience before moving into a wider, transcendental realm to create what feels like The Waste Land of Britpop.

‘Ladies and gentlemen we are floating in space.’ Radley’s unmistakeable tones ring throughout the auditorium and the audience cheers – we have lift off.  The 15-piece orchestra hold their instruments at the ready; the gospel choir stands, heads bowed in a kind of musical prayer. Suddenly, the stage is illuminated by an enormous disco ball, and white light shines through clusters of small holes in the black screen at the back of the stage, like stars: we are lost on a distant milky-way. The captain of the ship, Jason Pierce, sits stage left, his trademark dark sunglasses and greasy curtain of brown hair framing his face as he hunches over his guitar. Whilst Pierce wrote and arranged the record almost entirely himself, he refuses to take centre stage — even at a concert commemorating the most important album his band has produced.

Spiritualized launch into the title song, a rapturous lament to Pierce’s ex, held together by several different strands of melody. Pierce begins on his own, singing over the mechanical whirings of a space ship. ‘All I want in life’s a little bit of love/ To take the pain away/ Getting strong today/ A giant step each day’, he murmurs, in a voice trembling with fragility. ‘Giant step’ is perhaps a reference to Neil Armstrong’s quote: ‘one small step for man, one giant leap for mankind’ – for Pierce, his emotional isolation is comparable to that of the first man on the moon, in a foreign, desolate land by himself. Pierce then weaves together two separate sets of lyrics, the first echoing Pachelbel’s canon, a piece often played at weddings or funerals. ‘I will love you till I die/ And I will love you all the time’ he sighs, crucifying himself for a woman he knows is gone, drifting towards a metaphorical black hole. The third layer comes in the form of Elvis Presley’s ‘Can’t Help Falling In Love With You’, a song that mirrors this atmosphere of wilful destruction. The gospel choir sings behind the soaring violins and timpani: ‘Wise men say/ Only fools rush in/ But I can’t help/ Falling in love with you.’ As the song crescendos, and the disco ball slowly turns, the effect is spellbinding: a 10 minute long high.

The rest of the performance functions like a drifting tide: Pierce alternates between meditative, heartfelt ballads, rockier, bluesy numbers and cacophonic sound-pieces. The title song drifts into the self-destructive tale of little j (a veiled reference to Jason Pierce himself?) on ‘Come Together’, an assault on the senses where guitars, trumpets and the choir attack the audience. The show oscillates between these feel-good moments and the grotesque — with instrumentals like ‘The Individual’ and ‘No God Only Religion’ fuelling musical overdoses, as woodwinds, brass, strings and percussion all clash and distort one another. Lights flash red and green, reinforcing the conflict between ‘stop’ and ‘go’, and the sense of doubt that permeates Ladies and Gentlemen. It is at points like this where the songs seem most detached, aloof. They are not immediately likeable – and are not supposed to be. The joy of a Spiritualized song is that it reveals itself slowly, making the eventual moment of epiphany even more powerful. Epiphanic moments litter the album – it is biblical, with blatant religious overtones. As the choir, dressed in white, chants the lyrics to ‘Stay With Me’, bathed in blue light, it sounds like a hymn rather than a rock song, with stacks of repeated lines heaped on top of one another like a psalm. The tone is prayer-like, and the name of the band makes plain the ‘spiritual’ core at the heart of the music.

Moments of sweet sorrow come in the form of ‘Cool Waves’ and ‘Broken Heart’, with the latter providing the standout performance of the evening. Violins tremble and quiver, as the cello moans and the horns call out to the auditorium; Pierce’s voice shakes as he sings ‘Though I have a broken heart/ I’m too busy to be heartbroken/ There’s a lot of things that need to be done/ Lord I have a broken heart.’ It is beautiful, honest and painfully sad; as the song builds and the strings pulse theatrically, the arrangement is almost cinematic: at this point, the two lovers should embrace after a difficult period, and the film should end happily. But Pierce remains alone — he bitterly juxtaposes fantasy and reality. Ultimately, although he knows that ‘there’s a lot of things that need to be done’, Pierce would rather stay trapped in his own gloomy, drug-induced stupor – and the effect is contagious. The album is an ode to isolation.

As ‘Cop Shoot Cop…’ draws to a close, a recording of Radley’s voice says again ‘Ladies and gentlemen we are floating in space.’ The performance has come full circle, and we have arrived back where we started. Despite Pierce’s search for meaning and understanding, we remain ‘floating in space’, uncertain of where we are going. However, as the band is called back on stage with a rapturous encore and standing ovation, Pierce launches into ‘Oh Happy Day,’ a spiritual standard, the tone is markedly more hopeful. Ladies and Gentlemen We Are Floating In Space is nearly two decades old; with this life affirming song, Pierce bids his goodbye to his dark past and greets his future with open arms.