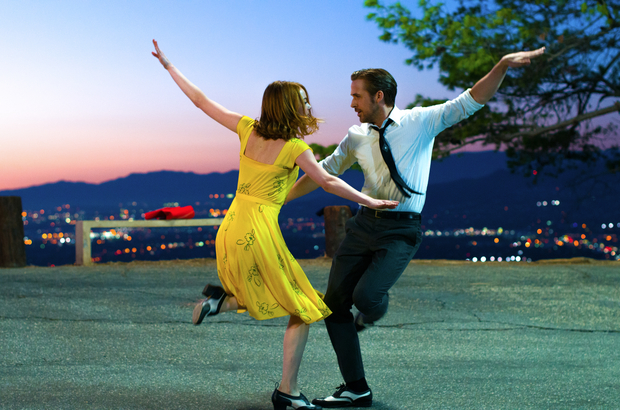 Despite being set in modern day Los Angeles, Damien Chazelle’s tale of two daydreamers, Mia (Emma Stone) and Sebastian (Ryan Gosling), carries a surprisingly retro flavour. Mia is an aspiring actress who works at a coffee shop in a studio lot, serving lattes to A-listers who pop in and out on golf carts. Sebastian is a passionate jazz musician who plays at restaurants to make ends meet. He is a purist who dreams of owning his own bar, where he can play the exact kind of music he likes. They meet and fall in love, vowing to help each other get off the ground.

The film opens with a stunning musical sequence during a traffic jam on the freeway to downtown Los Angeles. An array of colours fills the screen in the first few minutes, its exuberance striking the eye with immense vitality. The atmosphere is warm and inviting, and a strong sense of collective wonder radiates from the local audience, who seem mesmerised by the melange of people singing and dancing on car tops, soaking up the Californian sun.

Chazelle wrote La La Land in 2010 as a love letter to the city that he had grown up admiring in movies. There is an effortless fluidity in the movements of Mia and Sebastian as they waltz and tap-dance to their own beat. The prevalence of non-verbal scenes offers many opportunities for the audience to marvel at the stunning Los Angeles backdrops, most memorably a star-lit night sky filmed inside the city’s famous Griffith Observatory.

Emma Watson and Miles Teller were originally cast as Mia and Sebastian a couple of years ago, but scheduling conflicts meant things took an unexpected turn and the film did not enter into production until July 2015. By then, Chazelle had managed to sign on one of Hollywood’s tried and tested pairings. Stone and Gosling have previously performed as love interests in Crazy, Stupid, Love (2011), as well as in Gangster Squad (2013).

Chazelle’s creative vision for this pairing pays off wonderfully, and La La Land has received unanimous critical acclaim since its opening at the Venice Film Festival in August. Stone won the festival’s Volpi Cup for Best Actress, becoming the first American to win the prestigious award since Julianne Moore with the role of Cathy Whitaker in Far from Heaven (2002). Chazelle went on to win the People’s Choice Award at the Toronto International Film Festival in September, and the film snagged the Audience Award for Narrative Feature at the Hamptons Film Festival another month after that. It currently has an approval rating of 96% on the review aggregator website Rotten Tomatoes, and even received five stars in Peter Bradshaw’s review in The Guardian.

With spellbinding cinematography and an original soundtrack, La La Land is close to flawless. However, Chazelle has reiterated that this movie is about perseverance rather than perfection. Stone’s character poignantly sings in the trailer ‘here’s to the ones who dream’, which serves as a pertinent reminder that La La Land is ultimately a celebration of hard work and dedication.

Though the film’s repetitive cycle of attempt and rejection can seem cloying, its lack of cynicism is also refreshing. The couple’s unwavering faith in themselves propels their lives as well as this movie to success. La La Land will be one to watch at the Oscars.