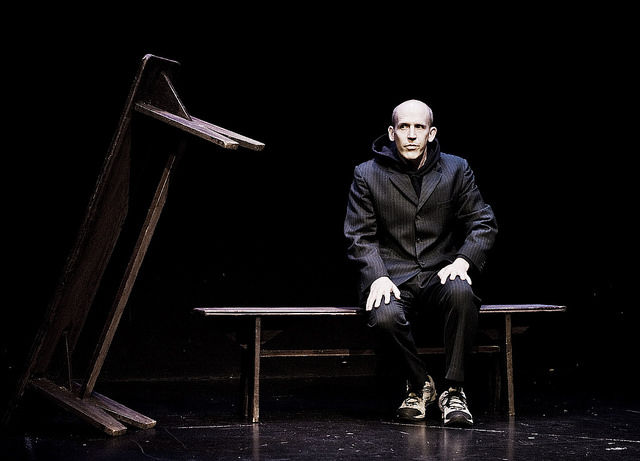 For anyone who already knows Beckett’s work, his bleak and often arresting style will be familiar. However, this adaptation of one of his lesser-known short stories, ‘First Love’, manages to reach unexpectedly confrontational levels of existential angst. The play’s solo actor, Beckett specialist Conor Lovett, gives a performance of such discomforting energy that it is impossible not to feel that the very voice of Beckett has been wrenched from private pages and monstrously brought to light on the stage.

Topics of decomposing corpses, human filth and the bleak reality of human existence are breached with a grotesque candidness – it is not these the narrator struggles to deal with, but the start of an unexpected relationship with a prostitute met on an icy park bench. Lovett’s lilting Irish voice – its varying tones fitting for the narrative of digressional asides and spirited crescendos – is utterly human. In a conversational style, he confronts the audience with his story, sometimes pausing and rephrasing in what at first seems like an unpolished and unrehearsed stilted flow. It soon becomes clear however, that Lovett portrays an irresistible honesty, through his uncertain, awkward delivery and seamless style. 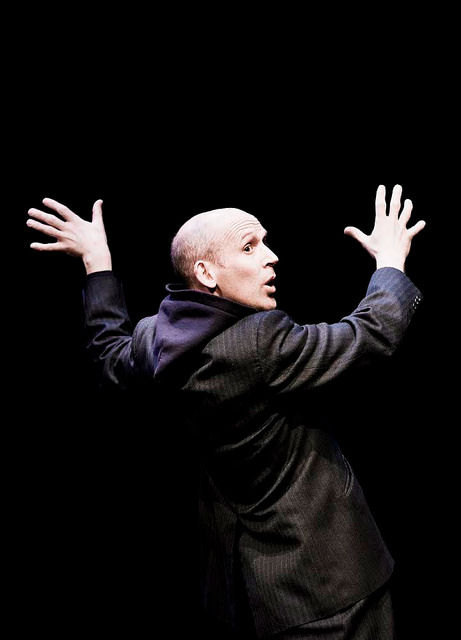 His use of silence, in particular, is mesmerising, as he pauses to size up the audience and the weight of his own words. The scantily set stage is on a level with audience’s seats, and Lovett makes full use of this opportunity to interact with his onlookers: during the long stretches of silence where he gazes at individual squirming members of the crowd, it is we, not he, who are the subjects of Beckett’s comment on the absurdity of existence. Rarely is theatre as profoundly immersive as this.

These spells of stillness are broken, sometimes excruciatingly, as Lovett returns with vigour to the telling of his story, a process made as enthralling as the preceding silence through the merest lick of his lips or tilt of his head; the total captivation of the audience validating his status as an accomplished Beckettian actor.

‘First Love’ is neither a feel-good play nor an elaborate visual spectacle. Piercing, bleak and darkly witty, this performance is an exposé both of Beckett’s narrative and the audience’s own vulnerability, as both are made completely subject to Lovett’s masterful control of a painfully undervalued text.

‘First Love’ is showing at the Arcola Theatre until 13th December, for tickets and information please click here https://www.arcolatheatre.com/production/arcola/first-love
Conor Lovett will be reprising his acclaimed performance in Will Eno’s ‘Title and Deed’ at the Print Room this January.

Image credited to the Arcola Theatre