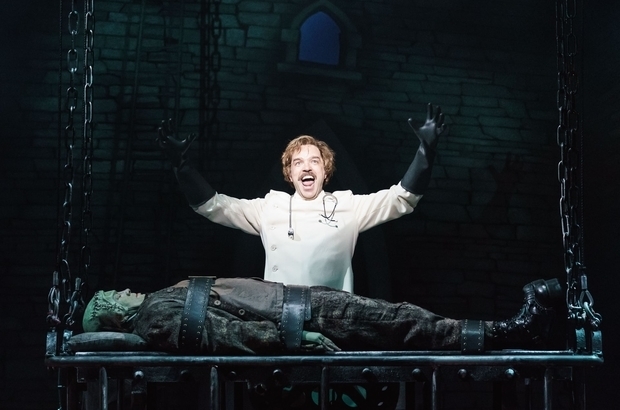 Bonkers, ridiculous and very, very silly, Mel Brooks’ musical adaptation of his 1974 comedy classic is simply hilarious, and that’s all it aspires to be. Offering no insights upon the human condition or the destructiveness of man’s quest for knowledge, the show’s sole purpose is to make audiences howl with laughter as much as the monster howls in bewilderment, pain and – in an especially eyebrow raising moment – insatiable lust. Who knew that a decomposing, linguistically-challenged, not-so-jolly green giant could be such a lady-killer?

American neurologist Frederick Frankenstein (Hadley Fraser) is enticed to Transylvania by the prospect of selling his infamous grandfather’s castle, which he has just inherited. So embarrassed is Frederick about his disreputable name, he insists on being called ‘Fronkensteen’ to conceal his family connection. But once he arrives at the castle, resurrecting the dead becomes just a bit too tempting. With the help of his rag-tag team of assistants, Frederick is soon digging up graves, raiding brain depositories, pulling on voltage-resistant gloves and bellowing ‘It’s alive! IT’S ALIVE! AHAHAHA!’

The production has a distinctly seventies vibe, mainly down to the outrageously bawdy script, with frequent innuendoes and saucy puns. Most of the dialogue is the same as the original, but the tunes imbue the production with an energy and buoyancy that makes the action of the plot seem even more ludicrous. Kudos to Mel Brooks (now 91) for making this work. Watching horror stock characters leap about the stage, gleefully singing about brains and performing morally dubious experiments is wonderfully bizarre and incongruous.

Among Fredrick’s motley crew is the young, attractive, and flirtatious female assistant Inga (Summer Strallen), who, in ze generically foreign accent, cheerfully describes herself as ‘a very hard furker’ – yet another temptation that proves too much for him to resist. Her song ‘Roll in ze Hay’ is one of the bawdiest. But it has nothing on the exceptionally silly and… er… somewhat… well… steamy rendition of ‘He vas my Boyfriend’ by the formidable housekeeper Frau Blucher (Leslie Joseph), concerning her affair with that rogue, that charmer, the original Victor Frankenstein. The comedy of this scene is especially enhanced by the score; it is hilarious to watch Joseph dance around a chair, strike provocative poses and rapturously proclaim: ‘HE PLOUGHED ME TILL ZE COWS CAME HOME!’

Gags retained from the film are funny as ever: whenever Frau Blucher’s name is mentioned, lightning strikes and horses whinny. Ross Noble, who plays Frederick’s trusty sidekick Igor (pronounced ‘Eye-gor’), gets some of the best of the original lines and gags, such as his ever-shifting hump and his famous confession to Frederick that he has provided his master with the brain of ‘Abby Normal’ for the monster, instead of a German thinker and intellectual. Noble, a stand-up comedian and regular on Have I Got News For You, proves himself here to be a great character actor and a surprisingly good dancer. He also gets many catchy songs, such as his duet with Frederick ‘Together Again for the First Time’ and ‘Transylvania Mania’, both of which are greatly entertaining.

Almost all the songs are unique to the musical number, but there is one sequence that also forms an especially famous scene in the original. This features Frederick Frankenstein, dressed in a top hat and bow-tie tip-tapping to ‘Putting on the Ritz’ alongside his matching-attired monster, who for the most part lumbers clumsily about the stage, balefully yowling the refrain, sounding like someone in a torture chamber experiencing terrible, terrible pain. This is certainly a very funny part of the production, though the best must be that of the monster’s encounter with a blind, lonely hermit. After singing of his yearning for ‘SOMEONE!’, the hermit’s attempts to befriend the creature don’t exactly go to plan, after he spills hot soup on him, smashes mugs and inadvertently sets fire to the monster’s thumb.

Young Frankenstein offers a highly enjoyable evening of irreverent comedy and melodrama. The musical numbers only make an already silly piece even sillier. It is a product of the ’70s: incredibly non-PC with its bawdy puns and innuendos. Inga fulfills the role of the ‘brainless blonde’ and Frederick’s former fiancé, Elizabeth, is pinpointed at first as little more than a prude. But the whole show is so ridiculous and so light-hearted that this doesn’t really matter. It’s a lot of fun, and still highly entertaining, even now, more than forty years after original film’s release.