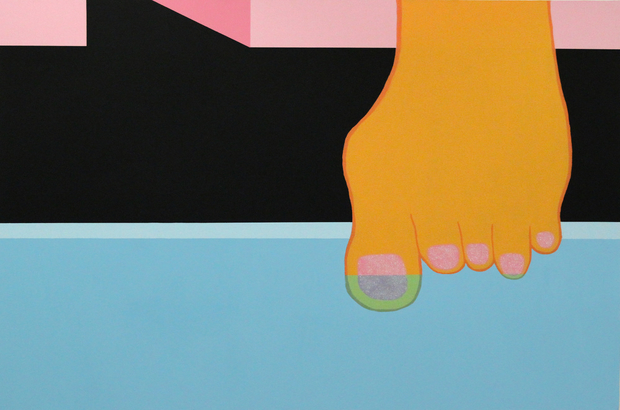 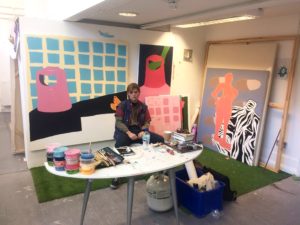 When asked what three words most accurately describe his artistic practice, Parker cites “Disco, Paris Hilton and Uggs”. This may just give you a sense of how he approaches pop culture in his paintings – using flat layers of matte acrylic colour to conjure up stylised images evocative of children’s paper dolls and New York disco inspired interiors. He can always remember being obsessed with drawing, reminiscing on how his childhood notebooks frequently featured mermaids and couples hugging at arms length. A child of the West End, he finds that even today his performing past – he speaks mainly of a background in performance art videos whilst at Brit School – feeds into his compositions.

He assures me that he merely “fell into painting by accident”, and was rather an artist of everything before he got into the Slade. However, he describes the shift towards solely painting as a natural and organic one, yet describes how the “process is a necessary evil for the outcome”. Parker’s current aesthetic seems less structured or formalised that previous works, he seems to be “chatting shit in paint form” and divulges a hatred for overtly academic and analytical approaches to artworks. Aiming to produce non-heavy, fun pieces, he frequently exhibits with a soundtrack of original disco tracks to firmly place his work in context. 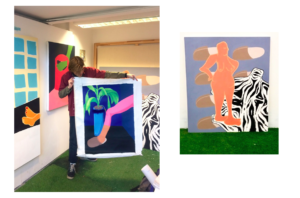 Repetition and instinctive colour combinations conjure layers in Parker’s paintings, yet by using contrast he deftly splits these up whilst remaining in two dimensions. His pieces are undeniably visually pleasing, the pop culture inspired colours providing an enticing prospect for the Instagram generation. Bored with the conceptual approach to art, he cites how Gemma Collins, TOWIE and Jessie J are his inspirations – even though he “used to hate” that he came from Essex. He even rejects citing any formal artists as painting muses, instead drawing links between noughties rom-com classics like Clueless, and But I’m a Cheerleader and his work.

Overall, Parker’s work projects an laid-back aura of tackiness, intersecting with American pop culture and imagined interior spaces. Despite him hating any “deeper meaning” to artwork, his refreshingly modern approach creates unique paintings that have a wide reaching appeal – the sign of a successful artist, surely.