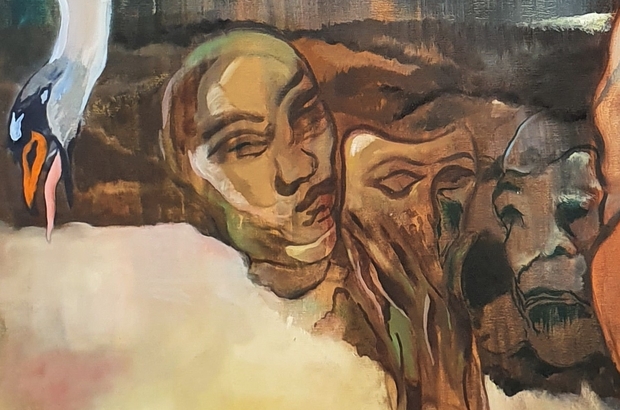 OKIKI AKINFE is a painter in her second year at the Slade. JEAN WATT interviewed her about how her practice has evolved this year.

What have you been up to at the moment?

Honestly, I think a lot of it has been distracting myself. I’ve finally started Killing Eve and Fleabag. With everything that’s going on at the moment I’m trying to take care of myself. I know everyone is reading and educating themselves [in the wake of the BLM Movement] which is really good and which I want everyone to do, but I think sometimes when you are a Black person, it can be a bit traumatic to constantly read everything again and re-see these experiences.

What were you doing most recently at the Slade when you had a studio?

I think I was getting to a place where I was really getting comfortable with the paintings, looking at layering and thinking about stripping back the works and looking at being more minimal with how I paint things, opening it up to more negative space. I had lots of ideas and was ready to plan them out and then Covid happened.

Have you been able to make any work at the moment?

I’ve managed to come back to my flat, so there’s more space to do work. I’ve got back into drawing again, trying to go back into what feels like something I haven’t done in ages but has probably been about three months. Slowly edging back into it.

Is drawing often how you begin your painting process? Where do you take inspiration from?

It’s a lot of different things. Sometimes it’s inspiration from conversations I’ve had with my family or friends. I hear or watch different things and then it eventually sort of builds to one idea in my head. I also get a lot of inspiration from music. This year, particularly, FKA Twigs’ new album Magdalene and a singer called Nao. Both their works have been a big inspiration, looking at female sexuality and femininity and what it means to be a woman. I’ve been thinking about how I can explore that and other things about myself. Like, ‘what do I feel makes me behave a certain way with cultural things about being Nigerian?’ and ‘what does that mean for how a woman should behave?’ So all these ideas come together, and then the visual cues come from thinking, ‘how would this look?’

You’ve been looking at your own identity in your work recently; do you think your painting is becoming more personal or has it always been about exploring something in yourself?

I think it’s become more personal; I remember I had a tutor that said that every painting is a self-portrait. I’ve always made works that are in some way about me, but using an image that removes [the work] from myself so that it’s more comfortable to paint and it’s not so self-confrontational. But more and more I’ve been asking myself, ‘why do I feel like this?’ or ‘why would I want to tell this part of the story?’ and ‘what do I identify with this?’ I think one of my paintings which really helped that is #Magdalene. It was like, the first proper breakthrough. I was looking at artists like Goya and his prints, and the myth of Leda and the swan, where Zeus turns into a swan, and it’s always told like he ‘seduces’ Leda, and I can’t stand people romanticising it. And then when I was listening to home with you by FKA Twigs, it really made me think about, ‘what does it feel to be a woman?’ – especially a Black woman. With everything going on, you feel like a lot of people want you to talk but you don’t want to talk because you’re so used to being told to be quiet. So I like that in the painting she’s sitting there and she seems serene and content with herself. But then you’ve got the swan being killed in the tree behind her. You don’t know if she killed it or not, but she seems happy.

You’ve spoken about being inspired by male and female archetypes, how do you look at that?

I think my work has changed a lot. When I first started at the Slade, I was watching this TED talk about the stances of an alpha male in ape society and how they behave. I found it interesting that the alpha males always had this prominent body language. It kind of reminded me of this archetypal playbook of how a woman or man is ‘supposed’ to behave. In my work, I want to explore the difference between men and women. There’s a photographer called Myles Loftin who photographs men in this really sensitive way and at this point between masculine and feminine.  But it’s also just about capturing them as they are. With women its always internal, it’s a lot deeper than just being androgynous or wearing a men’s clothing, it’s an inner struggle. The appearance is always very different to what people feel like and I think the best way to convey that in my work is these scenarios that have that in-between. I think what I need to work on is the description and making that clear. But for me it’s always been easier to paint what I want to paint and then work backwards from that.

You mentioned Goya earlier, what other artists or writers are you inspired by?

In terms of writing, I’ve read up on specific things I find interesting, like Animus Projection which is Carl Jung’s theory about how your unconscious self is formed by the opposite sex. I’m not sure I agree with how he’s laid it out, but the idea of it is interesting. Painters, visually: Michael Armitage of course, Lynette Yiadom-Boakye, Njideka Akunyili Crosby, Wangechi Mutu and Nengi Omuku. But then again, the best inspiration comes from things you are familiar with.

Has this period of lockdown changed your attitude to working?

I’ve really learnt to slow down; I’m actually allowing myself to take things in and realising that it’s not always about responding to things right there in that moment. It has definitely made me think about how things will be when I go back to the studio, going into my third year, and if I will be spending much more time working at home. I love large-scale painting, so it’s made me think how I could do that on a smaller scale. Even with these drawings I’ve been starting to do, I’ve been thinking about where the line is with too much information depending on scale. Do I go all in or take certain elements back and strip them down?