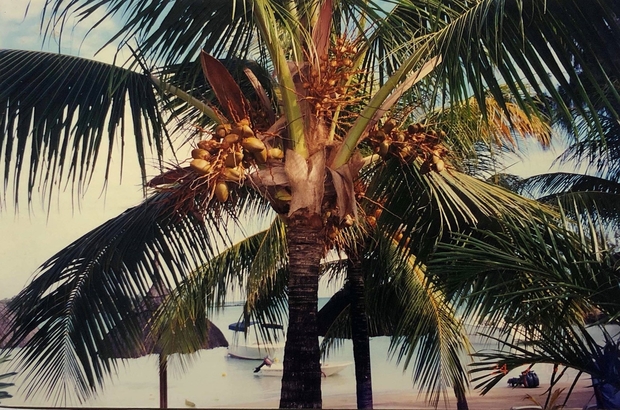 GABRIELA FOWLER explores her mixed race identity, reflecting on the racism experienced by her family and what it means to be anti-racist.

I once told an ex-boyfriend that I wasn’t comfortable with his racist jokes, that I didn’t find them funny, and not that it should matter, but that I was mixed race. His reply? ‘Well, you’re not really.’

‘My mum is from Mauritius, a tiny tropical island off the east coast of Madagascar,’ is a sentence I’ve become used to repeating, a glossy way of labelling my racial and cultural identity. I use it when someone sees a photo of my family, saying ‘Wow! Your mum is so dark!’ Or when I’ve been out with my cousins, and we run into one of their friends who can’t believe we’re related. We usually laugh off the discomfort, joke about it, ‘Yeah, well I do get pretty tanned during the summer,’ I’ve found myself saying defensively. As if people won’t believe me when I tell them who I am.

Living on Sydney’s predominantly white, upper-middle class Northern Beaches, my mum also had to defend her identity. She would be walking me in a pram, my strawberry blonde curls and her dark skin prompting ignorant, racist strangers to think she was the nanny. ‘No, she’s my baby,’ she’d have to proclaim, again, defensive. It’s just one example of what it’s like to be Black in what’s known as the ‘insular peninsula’ of Sydney. She used to speak Creole to us as kids, until my older brother said, ‘you don’t talk like the other mums do.’ So she stopped.

It’s a discomfort she’s felt often, ever since moving from Mauritius to Sydney in 1967, at the tender age of twelve. She was plunged into a high school that looked like Puberty Blues – the school assemblies were a sea of golden blonde heads and sun-tanned white skin. Mum was branded with the nickname ‘Hedge’ for her thick dark wavy hair that fell to her waist, until she scorched it into straight submission with a clothes iron. My Mauritian family entered Australia when the White Australia Policy was still in action – a set of laws that aimed to prevent non-white immigration to Australia up until 1973. Only fifty years ago. The first time they submitted passport photos, their application to move to Australia was rejected based on this policy. A friend told them they should retake the photos, powdering their faces first to whiten them. It worked. My grandparents feared the family would be split by their kids leaving Mauritius for better opportunities, and so were determined to keep everyone together by moving to Australia. It was a brave risk, leaving everything they knew behind and boarding the colossal ship that would carry them across the world, from their tiny, familiar island to a much larger, unknown one. They were unsure of which city they would choose to call home, disembarking at each stop. Perth had too many flies, Melbourne was too cold. Sydney, the final stop, was just right.

My Mauritian family’s experience of racism has ranged from the casual, ignorant comments made by people who claim (incorrectly) ‘but I’m not racist,’ to the overtly harmful, purposefully hateful. Many Aussies, including our Prime Minister, have claimed that Australia is nowhere near as racist as the US, failing to acknowledge that our nation is built on stolen land and the genocide and continued mistreatment of Aboriginal Australians. Being Black still puts you in danger of discrimination and violence and death, people are just less willing to talk about it. I could write thousands of words based solely on the hurt my Black family members have been subjected to, inadvertently or with purpose.

My mum is one of those people whose positive presence you immediately feel; her smile is near-constant and her sparkling energy is contagious. She worked at a pre-school, and once had one of her students ask, ‘Are you a little kid or are you a grown-up?’ That’s the kind of enthusiasm and joy that she exudes. She also once had a student tell her to wash her face because it was dirty. She had to overhear the office manager of the pre-school say of her, “Don’t ask her, that Black bitch won’t know anything.” A parent witnessed the incident, reported it and the office manager was sacked. Even though the punitive action was swift, those racist words have reverberated through generations; they have become a small thread in the fabric of our family story. It’s a story living now, as I type these words decades later. I wonder what significance those words hold for the woman who spoke them, if her children are familiar with that story.

Despite growing up hearing of my family’s experiences, despite being mixed race myself, I pass as white. I’ve never faced anxiety over introducing myself, waiting to be questioned, ‘No, but where are you from really?’ I see people who look like me on Netflix, YouTube, Instagram. I can buy makeup in my shade easily. I’ve never feared for my life being pulled over by the cops, nor had someone assume my intellect or skill level based on my appearance. I’ve never been subjected to racial slurs from strangers, nor felt the threat of violence based on the colour of my skin. ‘My Mum is from Mauritius, a tiny tropical island off the east coast of Madagascar,’ is a sentence I have used during ice-breaker games, in circles of university students during class, or as an introductory fun fact when starting a new job. That I have used being mixed race as an ‘interesting fact’ about myself is the perfect encapsulation of my white-passing privilege. I can pass as white and people are shocked to hear that I am not. I may have struggled with my racial identity, but I haven’t had to think about it every hour, every day, every year of my life. I have the privilege of learning about racism, of hearing about it from my family, rather than experiencing it.

My privilege doesn’t end there – I’m cisgender, able-bodied, I attended private school and university. I’ve had the financial privilege to travel, to quit a job I found unfulfilling, to move overseas and continue studying. When it came to race, for a lot of my life I had the privilege of barely thinking about it. Sure, in recent years I’d call out someone if they said something racist, but there were years when I didn’t. The teenage years when I lay on beaches, sandy and self-conscious, not of my skin-colour as my mum had been, but of my body. Of being desirable to the boys surfing in the waves, of not wanting to call them out because it was uncomfortable. I didn’t want to be labelled a ‘bitch,’ and as a boyfriend would eventually say, I worried that it wasn’t my issue to call out; I felt like I didn’t have the experience or the authority to speak about it. He was wrong. Not only is it my issue, but as a white person, it’s his too. It is the responsibility of those who have benefitted from white supremacy to acknowledge their privilege, and dismantle the systemic racism that runs rampant across the world.

My relationship with my Mauritian identity has been complex. I can’t speak for others who are mixed race; the dynamic between culture and race is one that is deeply personal, and often difficult and uncomfortable to articulate. When I was younger, my mum pointed to my Black Baby Born doll, saying, ‘This is what you might have looked like.’ I had always wanted to be darker, to look Mauritian and fit into family photos. What I failed to recognise was the privilege that my white-passing appearance afforded me. This doesn’t mean that I haven’t experienced hardship in my life, it just means my skin colour isn’t one of the things making it harder. I will no longer allow my own discomfort and uncertainty about my identity keep me silent. Because my grandmother still said in the weeks before she passed away that she wished she’d been born white. Because my mother silenced her own voice and her own culture so that I would be able to fit in. Because I do fit in, even if I’m not always entirely sure where. I won’t always get it right, but it is imperative that I try anyway. Because even though I may not look it, I am really. And I want to tell that story.

For far too long, the labour of anger, education and activism has fallen on the shoulders of Black people. One of the best things I can do with my white-passing privilege is what any white person should be doing with theirs – to be actively anti-racist. To point out when friends make any sort of racist comment, no matter their intent. To read writing from more Black authors, to support more Black-owned businesses, to watch TV and films created by and featuring Black people, to educate myself on the history of the systemic oppression of Black people. To donate what I can, to sign petitions and protest and write to politicians and to make noise. To listen to and amplify the voices of Black people. In the words of the Black activist, author and academic Angela Davis, ‘You have to act as if it were possible to radically transform the world. And you have to do it all the time.’