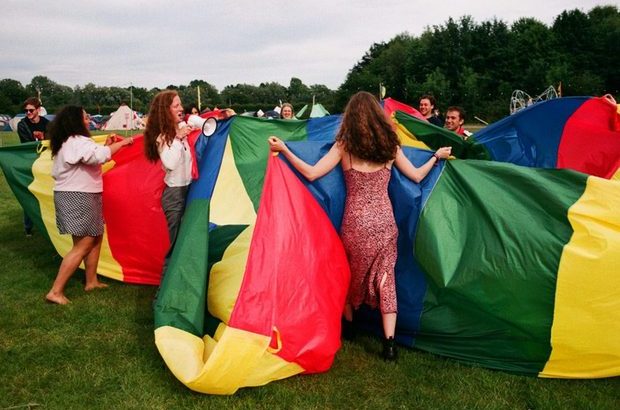 FLOSSIE WILDBLOOD investigates the vibrant, political and self-questioning community that is Brainchild Festival.

When spoken word poet Kate Tempest headlined the Roundhouse at the end of last year, she asked explicitly that no one use their phone during the show. That night, she performed her 2016 track Europe is Lost, responding to a curiously modern ennui through the words ‘Construct a self and psychosis/ and meanwhile the people are dead in their droves/ but nobody noticed, / Well actually, some of them noticed,/ you could tell by the emoji they posted’. It’s clear that politics today seems little more than an exercise in alienating our generation, a reminder that the values many of us share are incompatible with an agenda beyond our control. What’s less clear is why apathy, not action, has become the go-to response to this alienation, and to the unrelenting stream of atrocities unfolding daily in the wider world. Apathy is in many ways a natural reaction to feeling disenfranchised, but technology is making it easier than ever to get away with simply seeming interested.

This is disconcerting, but Tempest isn’t the only person addressing the artifice facilitated by social media, and the way it’s affecting our reactions with a real and troubled world. There are so many other young people actively working to change things for the better. One of these is Marina Blake, who was 19 and in her first year studying English at UCL when she founded Brainchild, an intimate three-day arts festival in East Sussex. Brainchild is primarily a festival, and people go to festivals primarily to have a good time, but it’s also an example of a space with potential beyond that. It exists as an antidote for detachment and a platform for change; you get the sense that, in a world that often appears hostile towards young people and their ideals, it should never really have happened. I met Marina in the canteen of the Tate Britain, where she works part time. As we discuss how this utopian idea became a powerful reality, she says she was driven by the very same adversity that deters so many others:

‘For everyone to actually feel empowered, motivated, inspired, things I really wanted to see in my friends, we needed to make it happen. I knew that if that didn’t happen it would just be such an almighty collapse of hopes, ambitions and confidence in everybody that it had to happen: that was it.’

2017 will be Brainchild’s fourth year of celebrating music, theatre, art, film, spoken word and just about everything else in a safe and communal context. Its self-proclaimed focus on ‘the spirit’ behind all art forms makes it less a conventional music festival, and more a reflection of real life: ‘everything is connected, and you have to have the ensemble to really get a picture of how everything relates.’ It is a rare and honest island amidst the superficiality that has come to characterise many other festivals and events, so much so that it’s won the AIM award for Best Independent Festival two years in a row. Unlike other festivals, its tickets (which sold out completely last year) cost only £70, and artists and audience mingle in the same campsite. It’s also free from sponsorship and major brands.

Brainchild was built initially with two central aims: creating a revolution in the head to challenge broken paradigms, and supporting young artists. These have changed and evolved alongside the festival. Marina consequently feels that this year is a pivotal time to be redefining what exactly it stands for, ultimately a ‘very politicized and open space that celebrates great people regardless of whether they’re a headliner or not.’

What’s clear is that the Brainchild team defines success in a way unlike those behind larger, more commercial festivals. ‘Our biggest success is the strength and the talent of the community that’s grown around the project’, says Marina. The festival’s intimacy is conducive to the creativity of its participants, and to take this away would be to threaten the success of the vibrant artistic community that uses Brainchild as an annual opportunity to come together and spontaneously create and discuss. Key issues are raised on a peer-to-peer level, and at such a small-scale event, ‘you can set your rules and your messages a lot more freely’, and ‘a lot of conversations are possible’ beyond the shadow of corporate sponsorship. Debate at a grass-roots level is more important now than ever: ideas formulated in spaces like these tend to become mainstream sooner or later, and can incentivise new and relevant forms of political opposition.

There is of course the glaring risk that Brainchild becomes an echo chamber, serving only to reinforce the views shared overwhelmingly by its attendees, many of whom come back year after year. ‘I’m really worried about that,’ says Marina, ‘I think it’s a really big problem, and I think that we’re constantly working on our programme to make sure that we make it safe for everyone’. Last year, the festival took place a month after Brexit, which naturally was a hot topic of conversation. Marina notes that ‘it was really meant to be an open discussion, knowing that everyone needed to talk about it’, and that when someone stood up and articulated their reasons for voting Leave, ‘everyone was listening’. This is certainly something to be celebrated: spaces like Brainchild have the potential to be arenas for revolutionary ideas, but this will not happen if everybody is in complacent agreement. People get caught up in a stifling desire to conform to their own variety of the status quo, so much so that eventually people ‘just don’t listen’, Marina worries. Landscapes like the Brainchild world, which many would already see as subversive, continually need to challenge their own assumptions, and find the more cutting form of subversion that focuses on ideas outside their  own sphere.

‘Reaching out to more audiences and engaging different people, generations, backgrounds, in debate, is the only way to actually get us to remember how to have discussions that are not just clicking like and not commenting and looking only at what algorithms have shown us that we already like. We are in serious danger of that.’

Brainchild is definitely an antidote to this strand of digital life, but it also relies on it and in part continues to exist because of it. The team was able to reach numerous people organically at the festival’s inception, and continues to use the internet to engage and sustain interest throughout the year. Marina is evidently conscious of the dangers of technology, but also of a need to acknowledge that it will always remain a part of our lives, and to work with it accordingly.

Part of this includes consistent emphasis on the importance of ‘bringing people together physically.’ What with incessant reports that young people are shunning clubbing, it’s possible that our conceptions of what constitutes “a good time” are changing. Marina feels it’s understandable that people are unimpressed by what’s on offer: young people aren’t entirely misanthropic, they’re just after a different type of experience, and events therefore need more narrative and edge to attract attention. Perhaps this is the perfect time for festivals and events with a decidedly political edge to come to the fore, provided we don’t underestimate the eternally sacred relationship between nightclubs and dance music – it’s a movement of expansion, rather than one of substitution.

Marina says that she’d ‘like to see a more holistic scene emerge again, that’s more about the experience people have, which is not about sex and drugs, and the experience musicians have, all together,’ and it’s not hard to slot this worldview in with the work Brainchild is doing. The festival has its own holistic scene growing around it, and occupies a fascinating space between being a remnant of 60’s hippie culture and a glimpse into a more sustainable and communal future, where spontaneous discussions have much-needed, tangible effects. ‘I actually feel like what we’re doing is very of our generation’, says Marina, urging others to do ‘the thing that feels really crazy’ and make their own contribution to Brainchild’s brand of counterculture. Marina imagines an ideal future where we see more and more small festivals arising to serve specific communities, and stimulate new and refreshing ideas. In the meantime, however, ‘if people relate to this in a way that makes them feel happy, if Brainchild is for them a good and happy thing, then we’re doing the thing right.’