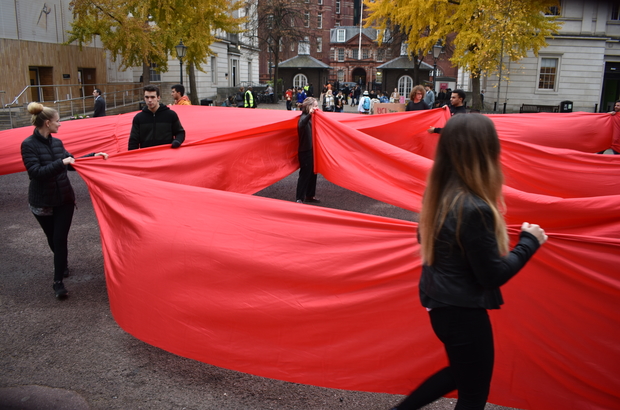 CHARLES STEVENSON, from Fossil Free UCL, recounts the recent activity of the society amidst signs that UCL might finally be divesting.

On Friday 16th November, students marched under a red ribbon intended to symbolise the human and environmental rights violations associated with climate change. The protesters then lay down in solidarity with the victims of climate change. Spokespersons for Fossil Free said the aim was to remind the university of the student and academic bodies’ continued rejection of the use of their money to support the fossil fuel industry. In this way, they hoped to emphasise the urgency of transitioning away from fossil energy in order to avoid climate breakdown.

‘Like tobacco funding health research’ is how Ben Franta, US Climate Activist and Stanford PhD student, recently described the status quo of universities investing in fossil fuels. If the institutions leading climate change research are still investing millions in the companies that contribute the most towards the problem, then what hope can there really be for other organisations and governments to make a real stand. The die-in represents the culmination of six years work by Fossil Free putting pressure on UCL’s administration in order for the university to do its bit in combating climate change.

At the same time as the protests, UCL Council met to discuss their recently ratified Policy for Socially Responsible Investment. The Council called the meeting to set out a timeline for divestment and to debate the possibility of retaining investments in non-extractive branches of fossil fuel providers. Yet while it is certainly a movement in the right direction, the policy does not explicitly commit to full divestment. What’s more, though the policy has been passed to the Investments committee, we are yet to see the committee confirm they will commit to it.

The effects of global warming are already being felt, most powerfully in the increased frequency of extreme weather events, ranging from current forest fires in California, to typhoon Yutu, which recently killed at least 15 people in the Philippines. The latest report by the UN Intergovernmental Panel on Climate Change (IPCC) highlighted that emissions need to be cut by 45% in the next twelve years in order to limit warming to 1.5oC. The IPCC stressed that 2oC of warming would mean hundreds of million more people exposed to food and water scarcity and therefore unprecedented rates of environmental migration.

UCL has already divested £11 million, although more than £1 million are still invested in fossil fuel producers. As late as January of this year, the university held shares in nine of the 200 largest fossil fuel companies, including Shell and BP. Oil companies have recognised that divestment (a global movement started on US university campuses) poses a major threat to their future. What needs to happen now is that the investments committee needs to agree to sell all the stocks they hold in fossil energy, and reinvest the money in accordance with the new responsible investment policy.

Fossil Free have achieved partial UCL Divestment. But this is not enough. We are organising another major protest with other student groups on December 12th to demand that the university publish a timeline for the implementation their Policy for Socially Responsible Investment, and to call for full divestment.

If this sounds like it is at all important to you, then we would urge you to come along.

Find out more about Fossil Free UCL here, and find out about their upcoming demo here.