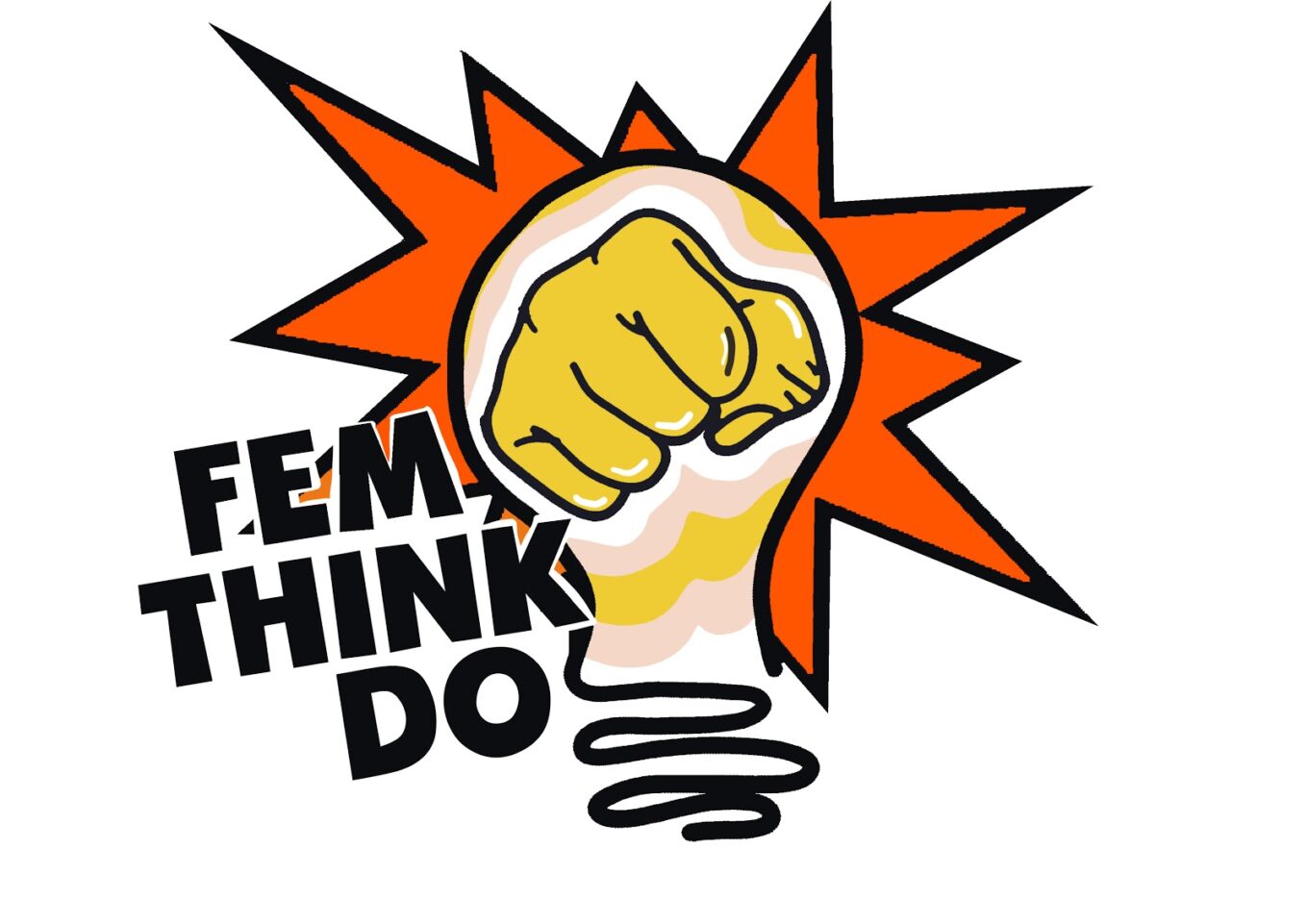 CHLOE TYE is a UCL alumna and co-founder of feminist events company FemThinkDo. SARA M. WHITE spoke to her about the project, which is launching this winter.

You and Lizzie Merrill founded FemThinkDo in October 2020. Could you start by explaining what it’s all about?

We created FemThinkDo as our way to explore and share some of the most exciting new feminist research beyond university. In our curated eight-week programmes, we host feminist speakers to deliver talks, panels and workshops on a range of topics related to feminism. In our pilot programme – coming January 2021 – we will be hosting speakers to talk on topics such as ‘Feminism and The Pandemic’, ‘Queer Theatre’, and ‘Feminism and Science’, among many others. With eight events to choose from, we’re sure there will be something for everyone.

What inspired you and Lizzie to create FemThinkDo?

Great question! There are two stories about how we started FemThinkDo. Firstly, last year, as part of our Master’s, we had to put on a series of feminist seminars. We both really enjoyed the creative freedom this gave us, the chance to talk about feminism and feminist theory with people who aren’t in academia, and the chance to see how different people, like authors, activists and artists, apply feminist theory to different sectors through their work. Secondly, after we both applied for the same job at an events company earlier this year, Lizzie joked ‘well, let’s just start a feminist events company ourselves’. Two days later, I thought, ‘wait, that’s actually a really good idea!’, and we’ve been working on it ever since. It’s been a product of the pandemic as well: having all this free time, we wanted to put our skills to use and do something productive.

You were an undergraduate at UCL from 2016 to 2019. How does FemThinkDo relate to your experience at UCL?

I discovered feminist theory at UCL during my degree in Classics. We had a module called ‘Classics and Literary Theory’, which was the first time I’d really seen feminist theory in the flesh and applied to an area of academia that I really enjoyed. I thought there was so much potential there. I ended up writing my dissertation about gender in Ancient Greece, using feminist theory to do so. I then went on to do a Master’s in Women’s Studies at Oxford, where I encountered so many more incredible feminist voices, not only in the reading for my course but also within the student body. UCL was the foundation of it all.

Are there any particular feminist issues that you’re keen to address through FemThinkDo?

Yeah, so many. Creating FemThinkDo really just opened our eyes to how interested people are in feminist theories and their applications to everyday life. One of our first events back in Oxford was a panel on Love Island and feminism. We had two poets come in who had curated an anthology of poems about Love Island. As a feminist who also watches Love Island, people asked me how I reconcile the two; it was a really interesting subject to so many people. The talk had a huge turnout compared to what we were expecting – one hundred and fifty people turned up. FemThinkDo has taken a lot of inspiration from these events; we want to see what people are really interested in and how contemporary culture relates to feminism. The pandemic also invites discussions about feminism. Women’s rights have been affected by it: instances of domestic abuse (in which women are disproportionately affected) have risen, women have had to take on the brunt of domestic work within the home despite both partners continuing to work, young women are more likely to get Covid because a high proportion of them work in hospitality, in education, and as carers… the list goes on. The pandemic has also disproportionately affected vulnerable people, as well as the BAME and LGBTQ+ communities. We plan to do multiple events on the pandemic and explore how it intersects with feminism and feminist theory, and how we can use feminist theory to learn and grow from the current situation.

How would you define what feminism means to you?

That’s a great question. I have real trouble articulating it, and the older I get, the harder it is, because I constantly discover new aspects of it – but I think that for me, feminism is first and foremost a community. It’s a place that I discovered with people who I enjoy talking to and can learn from. It’s talking about shared experiences and learning from one another. Feminism means something different to different people, but what it does best is create a space for sharing and listening to each other. With that comes intersectionality, listening to other people’s experiences that they have because of their identities, that you potentially don’t have. Race, class and sexuality all intersect with gender identity and the experiences that result.

I really appreciate your commitment, stated on the FemThinkDo website, to intersectionality, accessibility and integrity. Could you tell us more about how you actively engage with these core values?

These values are the building blocks of FemThinkDo. We discussed them first, before anything else, so they were integral to the concept of FemThinkDo. I think that as cisgender, white, privileged women, Lizzie and I want to acknowledge that and not pretend to be the only spokespeople for feminism. There’s a danger that we could seem to be monopolising the conversation, and choosing who can talk about feminism and who we platform, and that’s why we wanted to be so upfront about intersectionality as one of our core values. Our goal is, rather, to engage with feminist theory and create a platform that is accessible to everyone. So we really wanted to give a platform to a wide range of speakers from a wide range of backgrounds, to highlight the broadest possible range of experiences and voices.

This is the ideal, and there are pitfalls we could fall into in the process, which we want to acknowledge. This is where integrity comes in: we want people to call us out when we do fail and to learn from it, so it’s a very symbiotic relationship. We don’t want to put ourselves on a pedestal and pretend to be the experts, because everyone is the expert of their own feminism. We want to help spread people’s voices and raise the mic.

In terms of accessibility, the whole aim of FemThinkDo is to make feminist thought more accessible to the ‘everyday’ feminist. We want to make the events accessible to all financial situations: we will have concession tickets for students, seniors etc., as well as a selection of free tickets for the unemployed and those who cannot afford a ticket. We also want to make FemThinkDo accessible for those who are hard of hearing, so one of our aims with the Crowdfunder is to raise enough to be able to have live closed captioning.

You are currently running this Crowdfunder to get your project off the ground – the money raised will cover speaker fees and streaming costs for the first programme. As the Crowdfunder deadline approaches, can you tell us about any specific events you have in mind?

We have lots of ideas for events. Some things that we want to host talks on are, as I’ve mentioned earlier, the pandemic and its effects on vulnerable people and minority groups. We also want to do a talk on queer theatre: Lizzie is involved in performance art and she knows a few people who would be great for that. I’d really like to organise an event on feminism and science, because the discussion around women in STEM is so current, and we’d really like to add to it. I also wanted to mention that we’re going to do an exclusive donor event for backers who donate over £30, which will hopefully be a workshop on cultivating a feminist space, a kind of meta-event.

One last question: who are your feminist inspirations or icons?

My first thought is, ‘oh my God, who am I going to say?’, because there have been so many voices that have built on each other over the years. In terms of ‘mainstream’ feminism, since most academic feminist theorists are incredibly inaccessible to people who aren’t in academia, I’d say Jameela Jamil. She has made feminism so accessible for so many people, particularly in the way she owns up to her past mistakes and talks about her journey in feminism, because it really is a journey. It’s not like one day, you define yourself as a feminist, and the next day, you are one – it’s an ongoing process of practice. So I think the way she talks about her ingrained misogyny and how she has learnt from her mistakes in the public eye and under so much scrutiny is so admirable. Another would be Juno Roche, who is a transgender activist and author. I helped organise an event where they were speaking about their writing process and the experience of life-writing. They were such a good source of knowledge, and so humorous and witty in their insights. They have a bunch of books, entitled Queer Sex, Trans Power, and Gender Explorers, so I’m going to do a plug and recommend them!

Find out more about FemThinkDo on their website, and support the project via the crowdfunding page here.