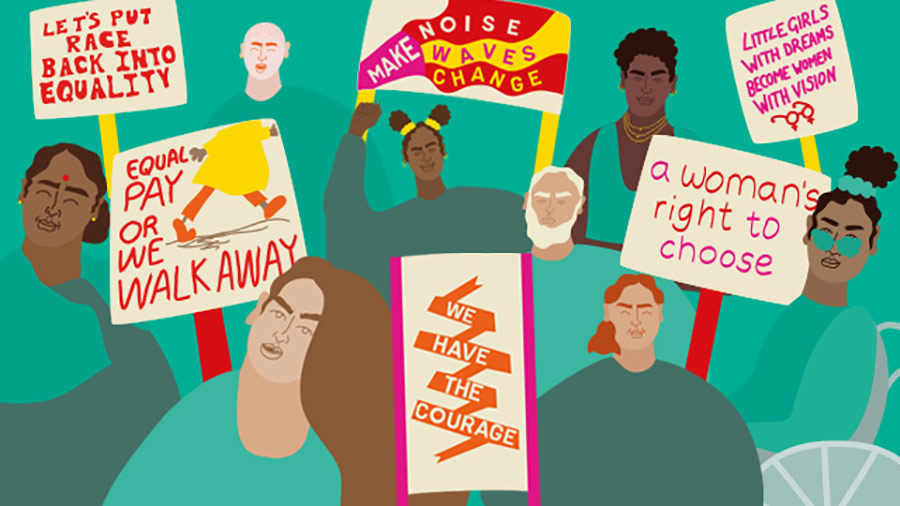 These are the first words you hear stepping into Unfinished Business, an exhibition on the Women’s Rights Movement held at The British Library in King’s Cross. I wholeheartedly agree. I grew up in a household consisting only of women and went to an all- girls’ comprehensive in London. I know the wonderful complexity of womanhood and all that women can and have achieved. In recent years, I have been surrounded by powerful Jewish women. I have been taught by profoundly inspirational women rabbis, and I have myself taught Jewish girls who want to change the world.

I was excited to make my way through the exhibition; I could already hear feminist voices reverberating throughout the small exhibition room. The first piece of text available to read says

…not all women enjoy the same rights, depending on their race, class, disability, sexuality, or the way they express their identity.

It is important that the exhibition is framed by this notion/idea – a concept which, in contemporary feminism, is understood as intersectionality (a term first coined by Kimberlé Crenshaw in 1989).

The exhibition starts as it means to go on. Progressing through three categories – body, mind, and voice – the collection explores a range of narratives within a digestible space and time frame. The first person we hear from on video is Professor Sasha Roseneil, who argues that ‘biology doesn’t have meaning outside culture’, that sex and gender are social constructs, and that the fixed, unchanging nature of these concepts is a product of the patriarchy.

The Mind section addresses labour inequality and the pervasive view that women’s thoughts and intellect are less developed than those of men. This is highlighted starkly by Maggie Aderin-Pocock, a space scientist, who feels disrespected and disbelieved as a Black woman in the sciences. When she was a young girl she told her teacher she wanted to be an astronaut, in response her teacher told her she should consider being a nurse instead. Aderin-Pocock went on to complete a PhD in mechanical engineering at Imperial College London, transcending the barriers erected by those around her that were seemingly based on a belief in the ‘limited’ capabilities of Black women. The fight for equal pay is also confronted here, with women doing 64% more of societal unpaid labour whilst only comprising 17% of the top 1% of earners.

The focus of The Voice section is on women’s ability to protest and demand justice. Referring to the ability of women to have autonomy over their own existence, journalist and author Renni Eddo Lodge states that ‘[women] are expected to be extras in men’s lives’ . The curators have poignantly placed Eddo Lodge’s video interview next to that of Juno Mac, a sex work activist. Mac describes the devaluing of sex work as tantamount to the historic devaluation of female labour. Both writers highlight a deep-set violence and irony; men are both the sex worker’s primary client, and a major obstacle in securing safe and fair working conditions.

The diversity of narratives in the exhibition is impressive. For such a compact exhibition, so much ground is covered in an in-depth and thoughtful manner, addressing both historical and contemporary narratives of female and trans* experience. However, I feel that the intersectionality of the exhibition fails to be self-reflexive. Curating the exhibition in this manner, a sense of solidarity and cohesion is projected onto The Women’s Movement that fails to account for the power struggles within its ranks. Historically, power and political voice on the wider stage has lain with white, middle-class and cis-gendered women, while an emphasis on unity has often erased complex experiences of Black women, queer women, trans* individuals, and disabled women. Fracturing out of necessity, subgroups and even totally distinct movements formed to fight for the emancipation of those with intersecting identities.

Something that is also left unmentioned is the ongoing conflict between Trans Exclusionary Radical Feminists (TERFs), or gender critical feminists, and Trans Affirmative feminists that remains so prevalent today. Susanna Rustin, a lead writer for The Guardian, recently wrote a piece entitled Feminists Like Me Aren’t Anti-trans – We Just Can’t Discard The Idea Of ‘Sex’, which used a headline photo of Judith Butler, a well-known gender theorist who argues against prescribed gender roles based on biological makeup. Rustin’s article argues that ‘sex’ is indivisible from feminist struggle because the body is the ground upon which many patriarchal battles are fought, with much of women’s exploitation being derived from ‘our role in reproduction’. Rustin presents her perspective as a ‘Beauvoirian’ form of feminism, one that sees the female body as the primary site of oppression. Whilst De Beauvoir’s work will always be relevant, feminism has since developed, and it is important that the feminist movement’s engagement with trans* bodies emulate this.

Early feminism was exclusionary in many ways. Whilst the 1918 extension of suffrage is remembered as a landmark, it is often forgotten that it gave only an elite group of wealthy, older women the vote. Both working-class women and younger women remained disenfranchised until 1928. The mainstream feminist movement has, as a result, often reflected these patterns and empowered subsections of privileged women. It was not until the 1970s that Lesbian Feminism gathered steam, and the treatment that Black and Brown women report in some feminist circles even today signals the latent white supremacy still permeating feminist discourse. In 2019, Monica T. Williams wrote for the plant medicine journal, Chacruna, about their experience on a feminist panel as the only person of colour. They describe having the microphone taken from them and handed to a white woman while they were speaking.

These micro and macro aggressions are indicators of a white, middle-class, cisgendered form of feminism imagined as the most authentic, with any deviances derailing this prescribed feminist agenda. Whilst it is true that the body is a site of oppression, not all bodies are the same regardless of sexed characteristics. The way in which a lesbian, Black or disabled body is oppressed differs vastly from that of a white heterosexual body. To argue, therefore, that there is one ‘authentic’ female body is a symptom of white heterosexual patriarchy and should not be viewed as true feminism. What gender critical feminists call ‘the trans debate’ – that there is an objectivity to womanhood – asserts the dominance of a certain type of body in and of itself. As Butler argues in an interview with Alona Ferber for The New Statesman, ‘Feminism has always been committed to the proposition that the social meanings of what it is to be a man or a woman are not yet settled. We tell Histories about what it meant to be a woman at a certain time and place, and we track the transformation of those categories over time.’

It seemed to me a real oversight by the Unfinished Business curatorial team to omit this nuance. Although there is power in presenting a wholly intersectional narrative, a realistic portrayal of the oppressions many women and non-binary people face today must not overlook the oppressions created from within the feminist movement itself.

Another oversight was the omission of Jewish women from the exhibition. The Second Wave Feminist Movement was disproportionately led by Jewish women, who used their experiences – sometimes as Holocaust survivors – to inform their fight for women’s liberation. From Betty Friedan and Gloria Steinem in the US, to Francesca Klug and Elizabeth Tikvah Sarah in the UK, Jewish women have stood at the forefront of Women’s Liberation. Jewish tradition teaches us to stand at the front of the struggle for social justice, an oft used quote from the Torah being ‘Tzedek, tzedek tirdof; Justice, justice you shall pursue’ (Deuteronomy 16:18-20). Although veering towards cliché, this line in our holy text is a powerful commandment to forcefully lead the struggle for liberation. Jewish women have shown a fierce commitment to this, and it is a shame that this does not feature in the exhibition.

Unfinished Business is a detailed and engaging account of many of the struggles faced by women and minority genders, and an essential visit for all. The exhibition platforms a range of opinions, people and ideas, and a contained comprehensive discussion of the issues women encounter. The two short-comings I observed, however, were the failure to discuss the women’s liberation movement’s engagement with trans*, working class, disabled, and Black and Brown people with a critical perspective, and the omission of the Jewish contribution to the fight for women’s rights. The exclusion of this complexity and the lack of self-reflection as opposed to projecting an idealised vision of what feminism should be is emblematic of the very issue women and minority gender people with intersecting identities are still struggling against today. It is, therefore, more important than ever that these groups are continuing the struggle to be heard, and are fighting against the hegemony so often imposed by white, middle class, cis-gendered women.