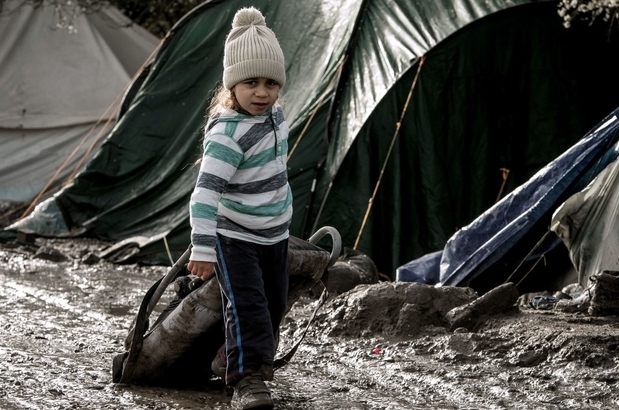 “Think of it as a trilogy and ‘Dublin III’ is The Empire Strikes Back,” John Pfumojena explains on Thursday evening at The Young Vic, where Good Chance Theatre — organisers of a now-evicted tent theatre in the Calais ‘Jungle’ — are staging a full-length, dramatised reading of the so-called ‘Dublin III’ Regulation — the latest central agreement concerning the responsibilities of EU member states towards asylum seekers. Pfumojena reads from a previously unseen script, narrating and commenting on the action of the other readers in a mock up of the European Court performed by Stavros Demetraki (Greece), Leonie Benesch (Germany), Gaël le Cornec (France), and Juliet Stevenson (Britain), among others (later Vanessa Redgrave, Carey Mulligan, and more).

The performance comes in response to news that the entire Calais refugee camp is to be evicted and cleared on Monday, leaving over a thousand unaccompanied children at risk. Those in the camp are to be dispersed throughout France by the infamous CRS riot police, to hostel accommodation and even, due to lack of beds, to detention centres. Good Chance are not mourning the camp in itself — they don’t sugarcoat how dangerous the camp has been for children — but they are visibly horrified by our government’s lack of planning for this clearance, which threatens what little stability those in the camp have, as well as its repeated failure to fulfill its legal responsibilities to asylum seekers at the border.

EU member states are to some extent responsible for those seeking asylum within their borders under the Geneva Convention, and the Dublin III Regulation, finalized in June 2013 (and staged on Thursday), is the latest articulation of this commitment, inadequate as it is. Dublin III sets out how people in need of international protection should be processed by government administrations, and while it is a long and complicated document — the reading lasted three hours — it contains two points that are crucial with regard to the impending evictions:

Dublin III was an important step forward in that it sets out out at least some protocol for how refugees should be handled by European states and it directly assigns responsibility. Repeated again and again in the regulations is the word ‘solidarity’, emphasizing the need for countries to work together in order for anything at all to be achieved in this crisis. Quite clearly though, the regulations put a huge burden on Italy, Greece and other common sites for first arrival in Europe, and in Good Chance’s dramatisation, Juliet Stevenson’s haughty Britain accordingly voices all the qualifiers in the regulations – the buts, howevers, only-whens and wheres – while the actual content of what is to be done for refugees is left to France, Germany and Greece to speak and act out.

Dublin III resolved a 2013 problem — what to do about so-called ‘orbital refugees’, assigning fixed responsibility to specific governments for those refugees who had been shuffled from state to state. Theresa May’s Home Office was very happy that this conveniently also dodged any major British responsibility. Contrastingly, in August 2015 Germany voluntarily assumed responsibility for processing Syrian asylum applications outside of the requirements of Dublin III as the result of extreme pressures faced by countries in the EU’s east, notably Hungary. The Czech Republic followed Germany’s lead in September that year. No such ‘solidarity’ from Britain: in a Europe where there are over 88 000 unaccompanied child refugees currently seeking asylum, we have not so far taken in even half of the 400 or so documented children in the Calais Camp we have legally committed to protect, let alone adults.

John Pfumojena goes on, ‘If ‘Dublin III’ is The Empire Strikes Back, the ‘Dubs Amendment’ is The Return of the Jedi‘: Lord Dubs, who escaped Nazi Germany to come to Britain in 1938 under the Kindertransport programme, backed by huge public support, forced David Cameron’s government in March to allow provision for 3 000 unaccompanied refugee children to come to the UK from Europe. Yet as of Lord Dubs’s visit to Calais this September, he found no children had been accepted from the camp into the UK under the provisions of his amendment.

Citizens UK — the organisation Good Chance Theatre implores us to support — has identified over 380 unaccompanied children in the Calais camp eligible to come to Britain under the Dublin III Regulation and the Dubs Amendment. A census conducted by Help Refugees on 15 October recorded 865 children living in the unofficial refugee camp in Calais, 78% of them on their own. Dublin III and Dubs should be life-saving in their provisions for unaccompanied refugee children, and yet, according to Good Chance, only 68 such children have been accepted into the UK so far this year having made it fully through the process of these regulations – and this small number is largely thanks to the work of Citizens UK. Registration alone can take over 10 hours and the overall process months and thousands of pounds for each of these children; Citizens UK has been bearing the brunt of these costs with little help from either the Home Office or the French government. Their funding is running dry and their time running out as the final round of evictions on Monday nears.

Juliet Stevenson’s toe-dragging characterization of Britain at the EU Court reflects accurately and shamefully on our government, who despite regulations and amendments have have done a poor job at honouring our commitments to child refugees throughout the crisis and been woefully slow to do anything to speed up the registration process. As the French and British governments embark upon another poorly-planned set of clearances that will put these children in extreme danger, Good Chance’s dramatised ‘Dublin III’ serves as an important reminder of our responsibilities.

Children were by no means safe from violence in the ‘Jungle’: before the first wave of evictions in March, The Independent reported a testimony from a group of medics working in the camp, who within the preceding six months had treated seven teenage boys, victims of extreme sexual abuse. Volunteers in the Calais camp have spoken out about the lack of any formal procedure for reporting sexual abuse, and the French government’s refusal to classify the camp as a humanitarian crisis has resulted in significant child protection issues.

With the fear and insecurity brought on by the March evictions, the atmosphere in the camp reportedly became gradually more toxic. This toxicity has only increased since the announcement of the next, final round of evictions: Joe Robertson and Joe Murphy, Artistic Directors of Good Chance’s Calais theatre, describe first hand experience of trying to help children who seemed literally to be losing their minds. Senior officials from multiple charities working in the camp have reported incidents of serious depression, self-harm and threats of suicide from minors in despair over the camp’s imminent destruction.

And yet, outside the limited stability of the camp are even more risks for unaccompanied children: Europol estimates that 10 000 unaccompanied children have gone missing since the beginning of the Refugee Crisis. Trafficking of child refugees at the hands of criminal gangs into slavery and sexual exploitation is a particularly visible but unpoliced threat, with young girls especially vulnerable. Less headline-worthy, but no less a risk is the fact that it is October, and winter is fast approaching in Northern France. Robertson and Murphy quite simply state, “what is a child, on their own, going to do in this situation? How will they survive?”

On the 10th of October, the Home Secretary Amber Rudd stated in a long overdue u-turn that the Home Office would do their best to take in all eligible children before the evictions, a process that was scheduled to begin last week and is now delayed until Monday. They have had just two weeks to register hundreds of children and kickstart this process. This is not an easy task: as Joe Robertson explains, it took months for Good Chance to build up even basic trust with unaccompanied children in the camp. As of September, there was still no system in place for identifying and registering children.

The French CRS, charged with managing the front line of registration, are currently approaching the registration effort by driving through the main avenues in riot gear, putting a call out on megaphones and loudspeakers. At the same time, evictions have already begun, shutting down shops and stores within the camp, terrifying its inhabitants. Joe Robertson tells us that since the announcement numerous unaccompanied children already “will have slipped through the gaps” and disappeared; after the March evictions of the southern part of the camp, 178 children disappeared and were not seen again.

Citizens UK have developed good, long term relationships with the people in the camp and have a wealth of data at their disposal. We are told Robertson, Murphy, and Stevenson approached Robert Goodwill, the Immigration Minister, hoping to work closely with the Government who could make use of their resources. However, their offer to work together has since been declined. With the speed at which evictions are being planned, the risks for the children currently living in Calais are incredibly high. Citizens UK is an incredible organisation and worth helping or donating to if you can; alongside their work in Calais, they are responsible for saving 6426 (and counting) children from detainment by the British Government in detention centers since 2010. Already, on Friday, Citizens UK welcomed 70 more children to the UK. However, they will need funding and help to continue finding children in the camp and fighting their case. With at least 400 children in the Jungle eligible for British asylum, Good Chance’s ‘LAST CHANCE’ reading makes it resoundingly clear our government is not doing enough. We cannot allow these children to slip through the gaps.

Find out more about Citizens UK  and Good Chance.

Write to your MP  and ask them to hold the government to its commitments to child asylum seekers under the Dubs Amendment, to find beds for these children and speed up the legal process. Calais is not the only camp on our border, we need our MPs to commit to continue supporting asylum seeker rights.