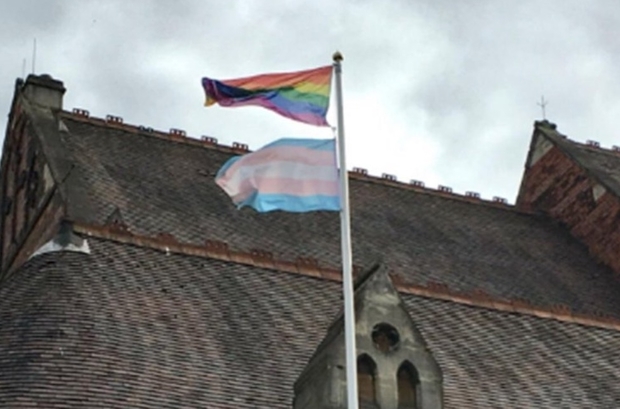 In ‘Felix Randal’, the great Victorian poet and priest Gerard Manley Hopkins wrestles with his Christianity and his sexuality, as he lays a handsome local farrier to rest. His religious and sexual identities seem diametrically opposed: the sonnet lurches in opposite directions. His faith demands composure, but his admiration of Randal’s physical form threatens to burst forth from beneath this dispassionate surface into a full-blown declaration of his sexuality:

‘Felix Randal the farrier, O is he dead then? my duty all ended,

Who have watched his mould of man, big-boned and hardy-handsome

Pining, pining, till time when reason rambled in it, and some

As Hopkins struggles to contain his feelings within their carefully crafted spiritual box, his devout Jesuit priesthood acts as the lid upon his self-expression. His inertia illustrates what is regarded in popular culture as the fundamental opposition between the religious and sensual worlds. Religion hems us in, refusing to let our full, multi-faceted identity take flight.

For Reverend Andrew Foreshew-Cain, this could not be further from the truth. Father Andrew, who tied the knot with his husband Stephen 3 years ago, is the first male Church of England vicar to be married to a man. Until recently, he was the vicar of St James’ Church in West Hampstead, and St Mary’s with All Souls, Kilburn. Known for his joyful, flamboyant services (and homemade cakes, which he brought to church), as well as his outspokenness on LGBTQ+ issues – he flies the Pride and Trans flags from St James all year round, and created a moving tribute to the victims of the Orlando shooting in June 2016 – here is a man who knows who he is. Whilst Hopkins wills his sexual and religious identities apart in ‘Felix Randal’, a poem permeated by self-doubt, Foreshew-Cain sees his religious and sexual identities as two equally important parts of himself that are not at war.

When I ask him about the Bible’s ostensibly harsh stance on homosexuality, he answers: ‘The Bible has no concept or understanding of modern homosexuality or how to approach it at all. ‘Homosexual’ was a word coined in the 19th century, when people were only just beginning to understand the concept of a diverse range of sexualities. When the Bible talks about sex between men, it does not see it as we do – as a genuine sexual orientation that somebody might have. It condemned it because it was against the hierarchical order of the time, with men at the top, women, then children, then slaves and so on. This was undeniably wrong, but it would be anachronistic to call the Bible homophobic.’ Scripture saw the world one way, argues Foreshew-Cain, and we now see it in another. The Bible is a historical document as well as a religious text, a reflection of the social attitudes held at the time of writing — in order for it to remain relevant and useful, we must think creatively about the words on the page.

Not everyone interprets the Bible as sensitively as Father Andrew does. Mainstream religion is well known for its rigidity, often more interested in providing cold, hard ‘objective’ truth than analysing the nuances of scripture. This has implications not just within the Church, but also within wider society: recent Home Office reports indicate that there are still roughly 20 homophobic hate crimes every day in the UK. Whilst most of these are not religiously motivated, having an ancient text to fall back on can justify bigotry that comes from a completely unreligious place. Homophobia is based on conservative social norms, which the Church tacitly approves and perpetuates.

Foreshew-Cain learnt this the hard way: ‘When I married my husband three years ago,’ he tells me, ‘the Church made it perfectly clear that if I left my parishes, I would never be allowed to work as a priest in the Church of England again. They were (grudgingly) willing to let me stay where I was – I am popular here, and removing me would cause public embarrassment. But they made it evident that if circumstances were to change – say, if I had to move away – that they would not help me relocate.’ Prophetically, this did happen, when Foreshew-Cain’s husband chose to take a new job in Manchester and the couple moved up there. Having already caused controversy by defying the Church’s rules on same-sex marriage for members of the clergy, Foreshew-Cain’s expectations were not high: ‘I told the Church I was thinking of moving last October; I received no response. That in itself is extraordinary – it is discriminatory, and would never be tolerated in the average workplace. I did not hear back from them until March, when I received my official resignation letter, asking me to sign at the bottom.’ Having decided to resign, he feels a certain bittersweet ‘relief’ – even after 30 years in the Church: ‘There is a kind of pressure in being paid by an organisation which treats you so badly… I think it’s wearisome, actually, to be constantly the focus for other people’s nastiness.’ No-one should feel this way about leaving an organisation they have served for 30 years.

The Church’s homophobia is damaging because it is insidious, only peeking out when people – like Father Andrew – actively take a stand against it. At first glance, its official website seems clear, helpful and understanding, with headings explaining its views on contraception, abortion and divorce; the wording immediately becomes oblique and evasive with regards to homosexuality and same sex marriage. Despite its liberal image, as an institution, it shares more than many would like to admit with its conservative cousin, Catholicism. ‘The Church of England is institutionally homophobic: it privileges and defends those who hold homophobic views; it makes homophobia a key part of the theology when it does not have to be’, says Foreshew-Cain. ‘The Church does not recognise its flaws, because it sees itself as immune from the expectations and critique of wider society. It is used to thinking it has a monopoly on moral thought.’ It is true that, like all old, traditional institutions, the Church wields power in society – to a far greater degree than we realise. It is, however, no longer immune to the criticism that naturally comes with this: its members are starting to lift the veil.

The ultra-conservatives are now a minority within the Church itself, far outweighed by compassionate, understanding individuals. Progressive conversations are certainly happening, but have not yet permeated official dialogue – this remains firmly stuck in the past. As Foreshew-Cain confirms, ‘There are a significant number of bishops in the Church who are open to change – but they are scared, for a variety of reasons, of being honest and open about what they think. A few of them – such as the Bishops of Liverpool, Manchester and Salisbury – are well known for being progressive and supportive of the LGBT communities. I know of several members of the clergy who are gay or lesbian, many in committed relationships – but they aren’t as public or frank as I am. The Church prefers a ‘don’t ask, don’t tell’ policy.’

As things stand, change is inevitable: it is becoming increasingly difficult for the Church to ignore the views of its members. In January 2017, the clergy rejected a conservative bishop’s report in favour of a continuation of the ban on same-sex marriage within the church; they claimed it was ‘grudging and condescending’, ‘divorced from reality’, and made the Church look unkind and homophobic. The issue is more political than ever – earlier this week at the Pink News parliamentary reception, Speaker John Bercow stressed the need for LGBT church marriages to take place ‘without having to fight the church for the equality that should be your right’.

When Justin Welby was appointed Archbishop of Canterbury, many had high hopes: he spoke out against homophobia in his first press conference, calling it ‘wicked’, and has apologised for the ‘hurt and pain’ of ‘past and present’ that the Church has caused to LGBT people. One Christian blog post pointed out that recognising homophobia as a real term is, in itself, progressive for a Church member– many evangelicals see it as a fabricated term with no real meaning. This was heralded as a fresh start. However, he has made disappointing progress: Welby often apologises for the Church’s stance on LGBT rights, but has done little to actively combat the forces of conservatism within it. For example, Welby recently stood by while the Anglican communion imposed sanctions on a US church that allowed a gay marriage to take place. Indeed, whilst he has never said anything homophobic himself, he has stressed the need to ‘love and embrace everyone who loves Jesus Christ’, including individuals who believe homosexuality to be ‘deeply, deeply wrong.’

Welby tempers progressive statements with ones which allow the traditional wing of the Church too much free reign. This suggests a desire to stay popular, to please everyone; perhaps his personal position is more conservative than he would like to publically admit. Welby often teeters on the edge of change, terrified of taking the first step, sacrificing truth and the happiness of his LGBT worshippers and calling instead for meaningless ‘unity’ within the church. It would not be far fetched to conclude that Welby’s seemingly enlightened attitude to homosexuality has no substance, merely acting as a way for him to make the church seem more ‘human’ to the more liberal British youth. Foreshew-Cain is equally sceptical of the organisation’s stance: ‘The leadership of the Church of England is desperate to defend the institution as is, rather than welcome how God is leading the Church in a more progressive, accepting direction. In order for the Church to stay relevant, it will have to change’. As an institution, it is in danger of alienating itself from its membership and from society at large. It is a waste for a priest as popular as Father Andrew to be cast aside in favour of reform.

Father Andrew’s frankness stands in stark contrast to the Church’s evasive refusal to interact. Whilst he is prepared to stand up for what he believes in, they will not engage. Instead, they are coolly dismissive, mumblingly vague, drifting in the purgatory between acceptance and damnation. As an agnostic who leans more towards the doubtful end of the spectrum, what struck me most about our conversation was Father Andrew’s description of God, as ‘infinitely involved with the individual’. The Church of England, an institution based on the relationship between God and each believer, should prize individuality above all else. It should welcome difference, and comprehend the importance of identity, however ‘complex’ that identity might be; it should welcome love most of all, expressed in any form. It should treasure the passionate self-expression of Hopkins, celebrate the importance of sexual identity within religious identity. It should embrace the LGBT community with open arms, and it should feel proud to do so. It should be, as Father Andrew says, ‘infinitely involved with the individual’.