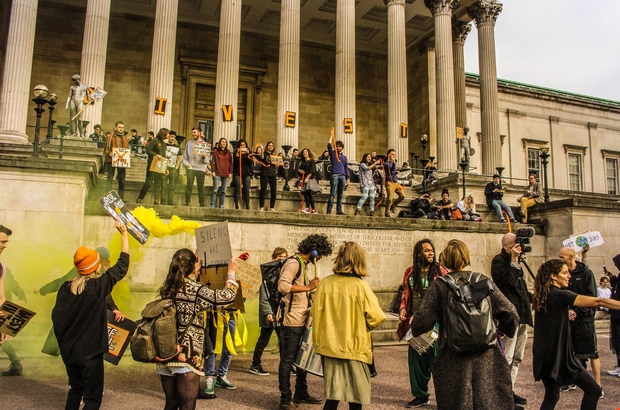 RUBY HARROP discusses the developments of UCL’s Fossil Free as part of a wider campaign to promote divestment from the fossil fuel industry and reinvest in renewable energy.

UCL publicly states in its ‘Green Environmental Sustainability Policy’ that it is committed to conducting itself ‘ethically and fairly, and in an environmentally sustainable manner, locally, nationally and globally.’ Simultaneously, it invests £12.1 million in the fossil fuel industry, including companies such as Shell, BP and Rio Tinto. The disparity is shockingly hypocritical. Why would an institution completely undermine its purported sustainable, ethical values in its funding from companies that danger human health and the environment?

Climate change is fast escalating into a global problem that inflicts the most malicious harm on those most vulnerable. The sea level rise that results in severe flooding and storms, agriculture deterioration and damage to human health affect a disproportionate amount of the the world’s poorest populations in the Global South. I need not list the statistics rife in the media, but every day an increasing percentage of the world population wakes up to the grim reality that we are heading towards an apocalyptic future – unless drastic action on a global scale is taken now.

So long as fossil fuel companies continue to profit from oil, coal and gas sales, it will never be in their interest to change their corporate behaviour and combat climate change. Not only contributing to greenhouse gas emissions, corporations such as Shell and BP have been complicit in human rights violations, supported brutal political regimes, all the while lobbying governments for fossil fuel subsidies and bankrolling climate change denial groups. Yet it appears that despite wreaking havoc on the earth, neoliberal power structures mean that fossil fuel corporations are rarely held accountable for atrocities.

Through paying university fees, we are lending legitimacy to the principal culprits of global warming. The excuse given by the university for its questionable investments is financial – fossil fuel shares bring in revenues. Under the current political and economic system, universities have become profit-making businesses as opposed to educational institutions that are a ‘social good’.

Even accepting this harsh truth, what stands in the way of change is that UCL Management is highly undemocratic. The UCL council is a board of members that preside over all the decisions made by the university overall. Of the 20 members, 11 are appointed from outside the university, meaning that if every member of the faculty on the council including the provost voted the same way, people without any stake in the university could still overrule. In fact, Dame DeAnne Julius, the chair of the council was a chief economist at Shell and a non-executive director on the board of BP for ten years.

It therefore takes little to speculate where UCL Management’s allegiances truly lie. The majority of student and academic bodies voted in favour of divestment and yet this has had little influence due to the grossly unfair power structure at UCL. Fossil Free have been diplomatically appealing to UCL council for five years but they have stubbornly refused to listen to the voices of their students and academics. Enough is enough.

Often students feel powerless to enact change in face of such corporate power. However, 60 universities have now divested because of pressure from student-led campaigns. King’s College London, for example, divested last year after the campaign escalated over a period of 6 months of persistent actions, including even a hunger strike. Student activism is therefore critical: the student body is a powerful voice in convincing universities to ethically invest and act in the interests of its students and academic staff.

So far this academic year, Fossil Free UCL have staged several creative actions from performing a theatrical oil wedding to chalking slogans and banner drops in the main quad. However, more direct action is increasingly being considered as only way to achieve full divestment, such as putting greater pressure on the UCL council through a greater awareness of the campaign. On the international scale, the Fossil Free movement is gaining momentum. We stand at a crucial juncture in climate justice activism and the potential for monumental change is immense.

Divestment would send a clear signal about UCL’s perspective on the future of energy and as a world-renowned university, such a stance could be influential on an international scale. The Fossil Free campaign demands full divestment from fossil fuels and into ethical, socially responsible funds. As we have seen in other universities, it’s a fight that can be won. It is time for UCL to take responsibility for allowing abuses of both the environment and communities to continue. UCL’s investments should reflect the voice of students, not those of shareholders and external council members. We want UCL to live up to its ‘ethical’ claims, be on the right side of history and break its links with the fossil fuel companies that ravage our planet.

To find out more about UCL Fossil Free and get involved with their work: