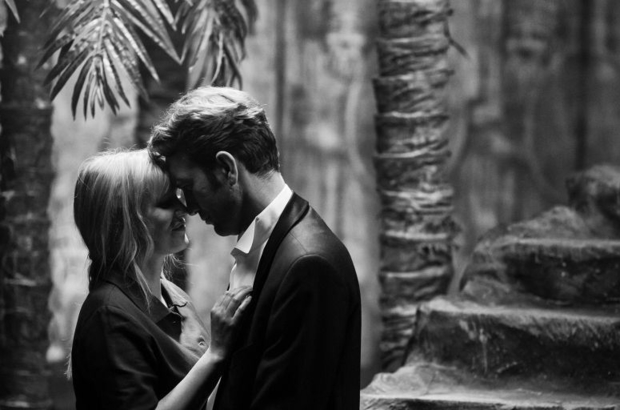 Paweł Pawlikowski’s latest feature tells the story of two passionate lovers fighting tooth and claw to survive under the communist regime of mid-century Poland. The director of Academy Award-winning Ida delivers a visually striking and musically delightful film that manages to avoid the Hollywood trap of joyful yet predictable eucatastrophe. Because, of course, in such real political tumult, love rarely conquers all.

Cold War opens on composer Wiktor (Tomasz Kot) and producer Irena (Agnieszka Kulesza) as they tour across Polish villages to scout singers and dancers for a new music group, ‘Mazurek’. From the crowd of candidates stands out a temperamental, confident town-girl called Zula (Joanna Kulig), who sees joining the group as a gateway to a better life. While Irena is unimpressed with her, Wiktor immediately becomes fascinated and takes her in. Pawlikowski goes on to capture the fickleness of their relationship through a non-linear plot. The love story jumps from Warsaw to Paris, through Berlin and Belgrade – from one winter to a summer years later.

We get to know Wiktor as an artist with a romantic soul, painfully unfit for the reality of life in communist Poland. It comes as no surprise that he decides to escape to Paris – a city depicted as an artistic utopia filled with jazz concerts, house parties, stimulating conversations, emancipated women and excellent wine. When Zula joins him they begin to record adaptations of the songs they performed in Poland. To Wiktor’s dismay however, Zula cannot find satisfaction in a crowd she deems pretentious. The time they spend in Paris exposes their contrasting characters. Their love is intense and real – passionate and at times brutal. It is also undoubtedly toxic. This cocktail of extreme emotions is bound to draw the audience in and absorb them entirely.

Pawlikowski aptly assembles fragmented historical references, incomplete life stories, and dreamy fantasies about a world behind the Iron Curtain. All of those are interwoven with cynical remarks — a coping mechanism for many Poles — and visual references to objects from the communist era that have gained an iconic status in Poland. Similar tea cups to the one featured in a scene at the Polish embassy in Paris could still be found in the cupboards of many Polish grandparents today.

Every detail in Cold War seems thoroughly planned, from a 1:33 aspect ratio that accentuates the atmosphere of confinement, through trapping the characters in black-and-white tones, to a dramatic narrative filled with understatements. We are presented with a selection of events that happened over a fifteen-year period and asked to use our imagination to conjure up what has been omitted.

Cold War is a reminder of these difficult years for the youth that lived in the Eastern Bloc. Communist rule and Soviet dominance in Poland spanned 37 years and infiltrated every aspect of the lives of Polish citizens. People were deprived of basic commodities. Their movements were watched, and their thoughts and ideas were censored. Yet just like Wiktor and Zula, they persisted in their attempts at evolving as individuals, achieving their goals and forming meaningful relationships.