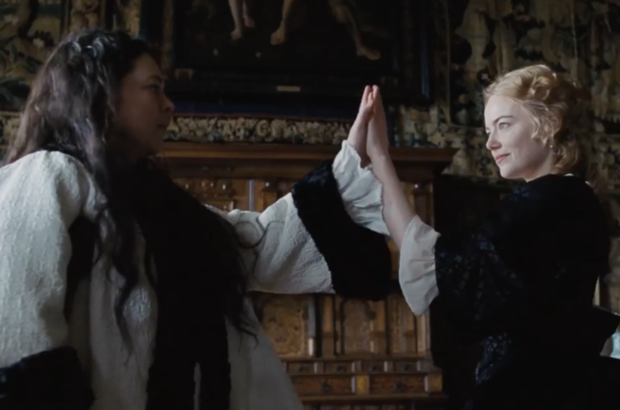 The Favourite is an intense deconstruction of what audiences have come to know as the typical period film. Despite its 18th-century English setting, it comes much closer to Sofia Coppola’s Marie Antoinette than to Joe Wright’s Pride and Prejudice. There is a distinct sense of anachronism emanating from the modern overtones of this film – characters forgo any sense of formality in favour of screams, swears, and temper tantrums. But what else could be expected from a film whose credits include ‘Nude Pomegranate Tory’ and ‘Wanking Man’? The Favourite is undoubtedly Yorgos Lanthimos’ most accessible film, immediately recognisable as his doing but at the same time an obvious departure from his previous works. This is most likely due to the fact that the director had no hand in the writing of the script, instead working with an original text by Deborah Davis and Tony McNamara which drips with epigrammatic witticisms.

The film focuses on the rivalry between two cousins, Sarah Churchill (Rachel Weisz), a high-ranking lady of the court, and Abigail Hill (Emma Stone), a woman disgraced from high society after her father gambled their wealth away and used his daughter to settle a debt. Behind closed doors, the two fight for the ultimate absolute favour of Queen Anne (Olivia Colman) in a bid to control crown and country. The historically-noted closeness between the Queen and these two women provides plenty of grounds for speculation about their relationships, and indeed this brilliantly obscene script takes the usual storyline of a struggle for power up a notch. Whip-sharp and filled to the brim with perfectly crafted farce, the writing allows Weisz, Stone and Colman to show off the full extent of their comedic timing. Lanthimos’ direction in this is crucial. It is not hard to see how easily the comedy could have failed in the hands of a director who would not wholly embrace the absurdity needed for this film to shine.

Dark humour is indeed the most memorable feature of The Favourite. Through it, Lanthimos demonstrates perfect command over his audience’s reaction. He is able to induce laughter about the most disgusting things, leaving just enough space to make you question exactly what it was that you found funny in the first place. You will be left virtually in tears until the very moment he wants you to stop.

Olivia Colman is perfect as Queen Anne, lending her talent to a simultaneously hilarious and heart-breaking performance which elevates the film even further. Despite not being framed as the protagonist, she is the emotional core of the film; the grounding element amongst all the absurdity. Her mood fluctuates between melancholia, rage, malleability and stubborn defiance. These sudden shifts are at once hilarious and a harsh depiction of a woman’s fragility as she is caught between two others. Churchill and Masham may, on some level, care for her, yet they do not hesitate to manipulate her all the same. The Favourite might first appear as the hilarious story of a bitter struggle for attention, power, and survival. But beneath the surface, Colman’s performance continually reminds us that Anne, incapable of escape, is the casualty of that battle.

Director of Photography Robbie Ryan creates an imposingly extravagant visual landscape, constantly utilising wide angles and distorted fish-eye effects to sketch the strange, anachronistic world in which the story takes place. This greatly serves Lanthimos’ distinct interpretation of the typical period piece and the audience’s expectations of it. It seems like some kind of reconstruction, taking elements of the usual period drama – intricate costumes, breath-taking landscapes and stately homes – and lacing them in such an unexpected way that they suddenly feel foreign. The production design only enhances this. Every detail is perfectly thought out, from the mountains of food adorning the tables, to the ridiculous powdered wigs and makeup worn by the men of the court (a special mention must go to Nicholas Hoult, faultless in his portrayal of Harley, an influential member of parliament who both manipulates and is manipulated by the women of the court). Every shot ends up feeling like some kind of absurd Renaissance painting.

Yorgos Lanthimos is a filmmaker who revels in that liminal space between absurdity and reality. He manages both to alienate and to ground his audience through a revision of their own reality, warping and contorting familiar situations until they seem to enter the realm of the uncanny. It is undoubtedly a fine line to tread, but one that Lanthimos has kept on exploring across his filmography. The Favourite marks the director’s finest attempt at balancing these opposing elements.

The Favourite will be released in the UK on January 1st 2019.