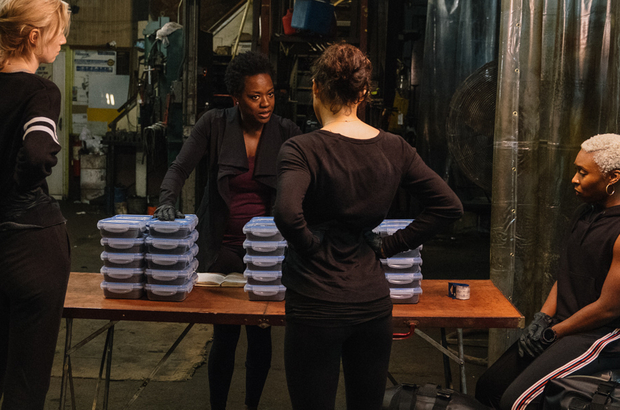 When four career criminals are killed in an attempted robbery, their widows take up the task they could never complete. Harry (Liam Neeson) and his gang owe two million dollars to grassroots gangsters on the brink of political ascendency. The Mannings brothers are angry. They want their money back. Fulfilling Harry’s plan for a final heist is the only way for the widows to satisfy these malevolent men. In Widows, Director Steve McQueen reinvents the traditional heist movie by plunging these average women in the criminal underworld their husbands operated in. He infuses the film with female power, squeezes in social criticism and sensitively explores grief. Co-written with Gillian Flynn, Widows fizzes with the same tension that made Gone Girl a white-knuckle, lump-in-throat thriller. Brace yourselves for a masterful ride through inner city Chicago.

Widows is explosive from the first shot. Opening with Veronica (Viola Davis) and Harry in bed, McQueen shatters this scene of marital harmony by inserting sudden flash-forwards to Harry’s failed getaway. Kisses become shots fired by the police. White sheets are juxtaposed with burning bodies. Harry disappears in flames, taking his wife’s innocence with him. Veronica is pushed out from Harry’s private life into his professional activity. McQueen subtly lays the foundations of his film: the personal has become political.

The story is played out in the dank underbelly of the city. McQueen’s Chicago is a bubbling cesspit of corruption. Something is rotten in the 18th ward, where gangsters collude with politicians and criminals conspire with the church. Jack Mulligan (Colin Farrell) and Jamal Manning (Brian Tyree Henry) are battling for the position of alderman. It’s the political elites versus the people, in a conflict complicated by their involvement with Harry and his criminal gang. With a Trumpian wink to the audience, McQueen creates an oily and duplicitous character in Jack Mulligan. The politician piggybacks on populist issues to further his own power. Illustrating how removed Mulligan is from the people, McQueen guides us through the impoverished 18th ward and its outskirts, where Mulligan has bought a house just so he can run for the municipal council. With the camera positioned outside Mulligan’s car, one take reveals how quickly dilapidated buildings give way to sprawling lawns and colossal town houses. McQueen captures poverty shoved up against affluence in a biting critique of inner city inequality.

Each woman is a complex character with something to prove. Alice (Elizabeth Debicki) was abused by her husband and mother and manipulated by the man who pays her for sex. For her, the heist means liberation from her oppressors and her past. Linda (Michelle Rodriguez) has had her shop dismantled by bailiffs after her husband gambled it away. She needs the money to keep her and her kids afloat. Belle (Cynthia Erivo) sprints onto the screen, fearless and fast as their getaway driver. These women are underestimated and undervalued by society: they are the perfect criminals. As Veronica declares: ‘Nobody thinks we have the balls to pull this off.’

Veronica – played impeccably by Davis – is their mobilising force. Before her husband’s funeral, she sits at her dressing table in silence. Her stillness is powerful. This shot, drawn out in real time by McQueen, forces the audience to confront her desperation. With the camera fixed on her face, Veronica cracks into a scream. McQueen captures the stupefying, staggering absurdity of her grief. Davis is real and raw. She gives a striking portrayal of bereavement.

In another stunning and sorrowful scene, the director mounts an urgent criticism against gun violence and police brutality. The death of Veronica’s son at the hands of white police officers is shocking and brutal. Blunt, direct and sudden shots jolt the plot. With this bold and surprising addition to a heist film, McQueen seamlessly transcends the codes of the genre.

Where Mulligan’s character is slippery, Jatemme Manning (Daniel Kaluuya) is genuinely terrifying. Henchman of his brother Jamal (Brian Tyree Henry), Jatemme is determined to get back their money for the campaign. He snakes onto screen, oozing with malice. He is psychotic, steely, and sees no harm in throwing a paralysed man from his wheelchair to get the information he needs. In one chilling scene, he circles two doomed gang members like a bird of prey. The camera loops in the opposite direction. In a smooth and strangely soothing manner, he makes the two rap for him, lulling them into a hypnotic trance before shooting them point blank in the head. The men of Widows are the bad guys. Because McQueen’s male characters are so appalling and interesting, they sometimes steal our attention away from the heroines. Whilst we want the widows to succeed, the bad guys are so evil that the audience wants to see more of them, in all their frightful awfulness.

Yet McQueen shows women throwing down the gauntlet to male power and succeeding. The crescendo of their rebellion is the heist. Hans Zimmer’s pounding score punctuates the long, tense silences that accompany the robbery. It heightens the sound of the characters’ hurried breath, pushing the pressure to boiling point. The camera darts with the widows as they stash cash into bags and make their getaway. The power of the narrative lies in the heroines’ motivations – they are steered not by greed, but by grief. By pushing women into a genre largely dominated by men, Widows offers a new take on the traditional heist film. It’s deeply refreshing to see women as victors, not victims.

Widows is on general release.