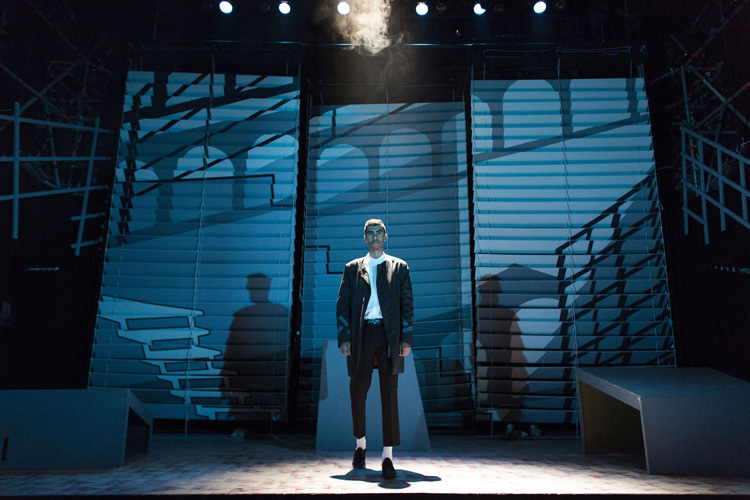 TESS LOWERY reviews the National Youth Theatre’s production of The Merchant of Venice.

The National Youth’s Theatre’s REP Company was launched in 2012, in the face of the horrifyingly rapid rise in the cost of formal acting training. Offering a free nine-month acting training course to 16 lucky young talents, this commendable scheme culminates in a West End season of three plays at the Ambassadors Theatre. This season’s performances consist of ‘Wuthering Heights’, ‘Consensual’ and Tom Stoppard’s abridgement of ‘The Merchant of Venice’, which premiered at the National Centre for Performing Arts in Beijing in 2008.

Unfortunately, it seems as though Shakespeare’s iconic tale of prejudice and revenge is held between clumsy hands. In the light of austerity and anti-immigration discourse, the NYT’s Associate Director Anna Niland has made the play highly contemporary, impressing its relevance on a modern audience. The setting is modern Venice; the entre-actes feature threatening Venetians in pig masks and no opportunity is missed to squeeze present-day references into the Shakespeare’s dialogue. However, with such lavish costumes and haughty airs, the play’s characters are more Bullingdon Club than working class anti-austerity protestors and the topical references push the script to breaking point.

The minimal set, borrowed from the Ambassadors’ current resident production Stomp, is used creatively and is strikingly lit in red and blue. Tristran Parkes’s jazz-infused sound and music is another highlight, as is the vivid characterisation in the minor roles. Paris Campbell is excellent as the rapper-cum-fashion killa Prince of Morocco and Lauren Lyle’s comedic timing makes for a hysterical Prince of Arrogan.

That being said, it is clear that Stoppard has stripped too much away from the original play-text so that Shakespeare’s outcast Shylock (Luke Pierre) and his daughter Jessica (Francene Turner) have an underwhelming presence. Perhaps Niland presumes that the main characters are already so well ingrained into any audience’s minds that they needed no further development. It’s an oversight that makes these protagonists pale into the background whilst secondary characters take centre stage.

A particularly interesting element of the play was the subtext of a clandestine homosocial romance between Antonio (Andrew Hanratty) and Bassanio (Jason Imlach). This is played up, culminating with an impassioned kiss between the two men as Antonio prepares to meet Shylock’s blade. Although an intriguing interpretation of the story, it comes across as contrived. Yet this modified his storyline does have potential; Portia’s decision to remain with Bassanio, despite her knowledge that he will forever be in love with Antonio, becomes a stoical reflection of the impossible predicament facing a woman of her time, and the dynamic between Portia and Antonio shifts to an implicit rivalry. Disappointingly, nothing is made of either.

Overall, this production has plenty of potential to capture the zeitgeist of many of today’s most pressing issues, but falls disappointingly short of the mark.

‘The Merchant of Venice’ is playing until 2nd December as part of NYT’s season at the Ambassadors Theatre. For more information on the season visit http://www.nyt.org.uk/epic-shows/.