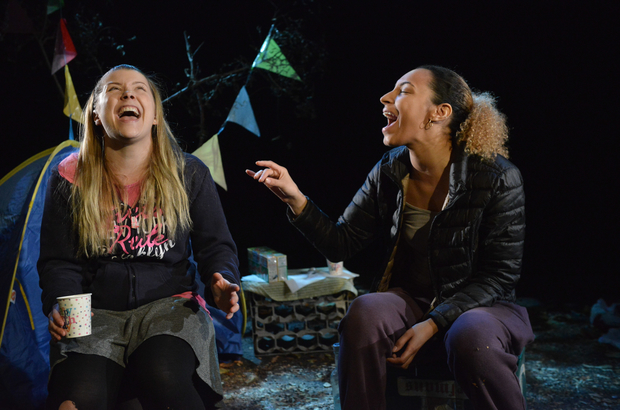 It’s the small things that make a house a home, but the distinction is critical. All The Little Lights, at Dalston’s Arcola Theatre, is a harrowing narrative about three lost youths searching, anywhere, for ways they can feel at home in their own lives. Taking place in an urban sprawl in which two of the three girls have chosen to pitch a tent for the night, Jane Upton’s fantastic new writing uses three characters to discuss themes of abuse in three stages. We see a younger, more naïve Amy, just 12, tragically walk into the same manipulative traps that the two older girls, Joanne, 16, and Lisa, 15 have already been victims of. Whereas Amy’s managed to be taken in by a loving foster family, Joanne still struggles to deal with ongoing abuse. Using these three characters, All The Little Lights successfully explores the shame and desperation an abuse victim might feel as they try and work themselves back into family life.

All The Little Lights is a complex play in terms of its exposition of its characters. Joanne, the older, maternal figure of the group, tries to create a sense of family wherever she can find it. Spaghetti hoops are cooked outside of a tent, with the nuclear family sitting on oil canisters around a small gas burner rather than warm inside cookie cutter suburban houses. She is a young, vulnerable person navigating herself into family life – even if it is through worthless artefacts, vastly inferior to what she really wants. The lack of a familial structure in Joanne’s life is clear, and she spends her time assembling whatever parts of a home she can find. She reminisces about day trips to the cinema with the younger Amy, a confused hybrid of a daughter/sister figure, in the same way that one might talk about a day spent lounging in front of the television. Yet Joanne’s makeshift family is always shown to be a poor knock-off of the real thing. When she dreams of starting a new life with her old friend Lisa, who was recently taken in by a foster family, her ambitions are shattered when in realising that Amy’s finally in a place she no longer needs to escape from. A sad, silent moment in the play occurs when Joanne forces the younger Amy to drink from a bottle of vodka, in an effort to keep the illusion going.

At moments, Joanne erupts into fits of anger as she realises the futility of her efforts. Her labours are diminished into significance when it becomes clear that Lisa has been adopted into a warm family, and quickly abandoned their horrible friendship. This dynamic captures one of the most  tragic elements of Joanne’s story. Though she spends all her time trying to create a family, it’s made clear that anyone with a better option would leave and break all ties as soon as possible.

The play descends into far darker territory when the explanation for Joanne’s anger and confusion is revealed, and a history of sexual abuse is detailed to a tense audience – Jane Upton’s writing manages to delicately carry such a difficult topic. However, though this fairly complete revelation of tragedy explains Joanne’s behaviour, Upton doesn’t do too much with this new information apart from allowing a darker understanding of the characters. The abused girls frequently miscommunicate warmth, or closeness, with sex, even kissing each other in a confused moment of intimacy.

Upton’s script is dazzling, and special mention should be given to Tessie Orange-Turner, Joanne, who manages to pull off the darting confusion that the play’s writing brilliantly presents. Director Laura Ford takes a strong script and makes sure that the most painful, and private, consequences of abuse are explored with nuance. Hidden glances of genuine hope, warmth or affection are masked by defensive exhibitions of anger and bullying, and it’s the audience’s job to sift through the mixed emotions. It’s the most compelling feature of the play and one that asks something very challenging of an audience – that they sympathise wholeheartedly with those who, as a result of past abuse, often show only an aggressive front. Upton’s writing gives us the knowledge of why these kids have evolved into the vulnerable people they are, but it’s the with the support of a great cast and direction that one really manages to see the fractured souls behind the stony facades.

All The Little Lights is running at the Arcola until 4th November. Find tickets and more information here.