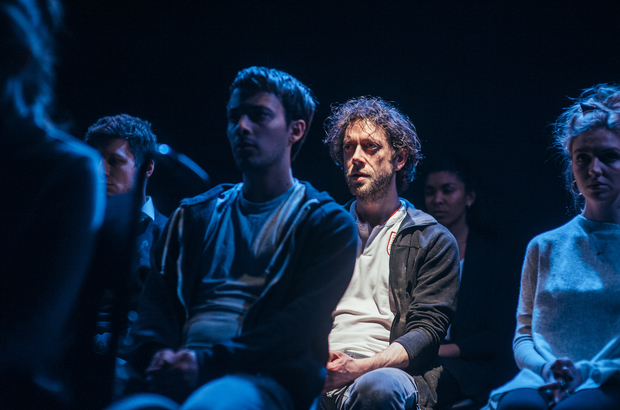 JESS HOWLEY-WELLS reviews the verbatim encounter with terrorism in BU21 at Trafalgar Studios.

What is remarkable about BU21 is that it is funny. It centres around six survivors of a terrorist attack who meet at a support group following the disaster–a commercial plane is hit by a missile and falls to the ground in Fulham, June 2017. We watch each of them relive the moment of the attack and their journey to recovery in individual monologues, that occasionally intertwine and repeatedly tear down the fourth wall with relish.

So, how do you put on a play fundamentally about personal suffering and make it funny without being flippant? Entertaining without being crass? First, Stuart Slade does not skirt around any social anxieties over terrorism in his writing. Quite the opposite: he includes all of it. This is a safe space–a support group, if you will. The meta- is strong. Clive (Clive Keen) talks more and more nervously about his conversion to Islam prior to the attack and then leaves the stage saying something vague and cliff-hanger-y about being ‘sorry about what happens next’: we are filled with a dread that we don’t want to put a name to–that one of our protagonists is becoming a terrorist. And we do feel uncomfortable with ourselves when Alex–played by the excellent Alexander Forsyth in one of the strongest performances of the show–then shuts us down remarking on how judgemental we are–Clive was never going to turn out to be a terrorist ‘you racist fucks’.

The play’s incredible openness, and its fixation with what it is that essentially makes us human is what makes it a perfect space for humour. One of our most human impulses is indeed to laugh even in the most desperate situations. The rest of the cast portray this with equal verve: Florence Roberts as Floss, Graham O’Mara as Graham, Isabella Laughland as Izzy and Roxana Lupu as Ana, all give deeply relatable accounts of how they reconcile the versions of suffering they have seen in the media prior to the attack with the version of suffering they have experienced first-hand. Ana recalls how all she could think about when covering her wounds with a Mickey Mouse towel, was that she was upset she would get blood on Mickey’s face. Floss watches a man from the plane fall from sky into her garden, and the first thing that popped into her head was ‘It’s Raining Men’. We cannot always control our responses to despair.

That said, BU21 doesn’t settle for farce. This is perhaps the deft touch of Dan Pick’s direction. According to the situation, Pick has the characters move plastic chairs around amongst rubble and fluorescent lights–at one point the chairs are moved into a long row and all the characters sitting on them assume the ‘brace’ position that all of us are familiar with from airplane safety briefs. It is a play about dark and light, and the set and direction reflect this perfectly.

BU21 also comments on the strange and potentially distasteful acts of solidarity we sometimes feel compelled to perform when these events do not happen directly to us. Did changing your profile picture to the French flag back in November 2015 make you feel better? Why didn’t you change it to the Turkish flag at the beginning of this month? Why are these things only painful when they are close to home, and we know the gruesome details? Graham’s character development lends itself to these questions–he turns out to be a phony, he made up the fact that he saved five people from the ruins to monopolise on people’s admiration, and then continues the lie by attending the support group. He is the most terrifying prospect of the play, as he is made so human you can almost empathise–a narcissist among true mourners.

BU21 is showing until 19th February 2017 at Trafalgar Studios. For more information and tickets click here.