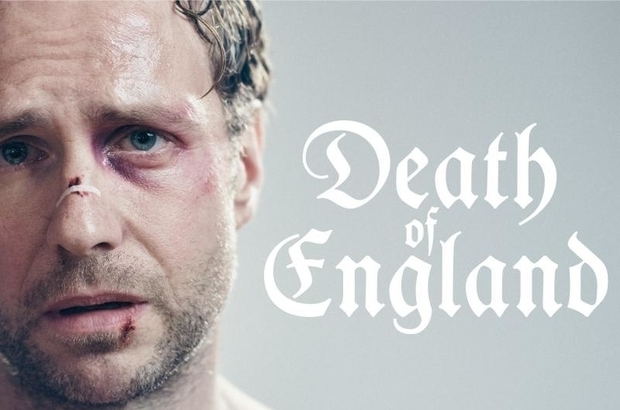 ZANE KHAN reviews Death of England at the National Theatre.

Death of England, written by Roy Williams and Clint Dyer and performed at the National Theatre, is a powerful extended monologue that concerns the paternal bond in a working-class family and how it undergoes incredible pressure through its relationship with England. Michael (played by Rafe Spall) is a young individual who is in mourning. His search for his father’s true identity is marred by the racial and social differences that have plagued England from the late 1960s to the present day.

Death of England is a one-man play, with the stage as the Cross of Saint George. The presence of the red-lit cross allows Spall to take advantage of spatial opportunities in interacting with the audience; often with a comedic pun that lightens the mood in the first act of the play. Items that are significant to Michael and his father are placed in compartments above the stage; this allows Spall to both reference and utilise certain items – such as the female Pitbull doll that represents his sister – and illustrate the impact they have on his convoluted life.

The plot of the play is refreshingly simple. Michael’s father passes away, and his grief accumulates through connected retrospective narratives until the denouement of the production when he delivers his speech at the funeral. However, this does not do justice to the multitude of threads that underlie Michael’s deteriorating state. The scene concerning the Semi-Final match between England and Croatia in the 2018 World Cup is heart-breaking and visceral. They are both in the pub watching the match and his father exclaims, when England concede to the Croatians, ‘We’re better than this!!! We’re English!!!’

National pride plays an important factor within the narrative. Michael’s father’s identity revolves around England, and this is also key when the father constantly asks Michael whether he voted leave or remain in the Brexit referendum. Michael tearfully shouts ‘Leave? Remain? Who gives a shit?’ Williams and Dyer are attempting to show how the result of the referendum is insignificant; all it has done is severed England into pockets of hatred and discontent. Regardless of whether you voted to remain or leave the European Union, Michael’s growing feeling of hostility towards England is a feeling that plagues much of the country. His father dies as soon as the game ends, and this only serves to intensify Michael’s increasing frustration with England – microcosmically represented by the national football team – when he states ‘Dad stopped. Fucking England. That is all they could muster for my dad, after years of watching, total belonging.’

The play affords Spall the opportunity to play multiple characters within the framework of a retrospective narrative. Spall is a phenomenal actor; his physical and vocal dynamism is one of the key factors of the creation of a magnificent play. This is beautifully shown through the jarring and uncomfortable episode following the death of his father; he plays both his stubborn and manipulative sister, Carly, and his distant mother. The most poignant line of the play is when his mother asks him ‘what do you believe in Michael?’ His apathetic stance towards the strong beliefs held by his father – such as the Brexit referendum, the loss of English identity due to immigration – holds little weight for Michael. He screams to the audience surrounding him ‘Fuck knows. I mean at the end of the day what does it matter?’

His apathy is representative of the collective feeling of a nation in a post-Brexit society; where many have little to no awareness of what is happening in their country due to the irrelevance it has to the most important aspect of the human condition: relationships. During the momentous funeral speech, Michael delivers a verdict on the position of a country his father loved so dearly. He shouts ‘who gives a toss what the likes of us think, because they don’t care […] Dad hated himself! Always upset, always complaining, but never once got up from his arse and did something about it.’ The speech offers a multitude of factors involved in understanding the banality of hatred. We see his father’s despair at his own apathy and how he blamed that on wider social issues in order to achieve a semblance of identity. His views sowed the seeds of hate and anger which passed from father to son.

Death of England is a wonderful play that encapsulates the private and public spheres of the working class in England. Hatred within the play is generational, it is a marker of identity. Yet, the writers demonstrate how hatred on a societal level also penetrates the familial sphere and permeates every aspect of the human condition until their identity is no more.

Death of England runs at the National Theatre until the 8th March, more details here.