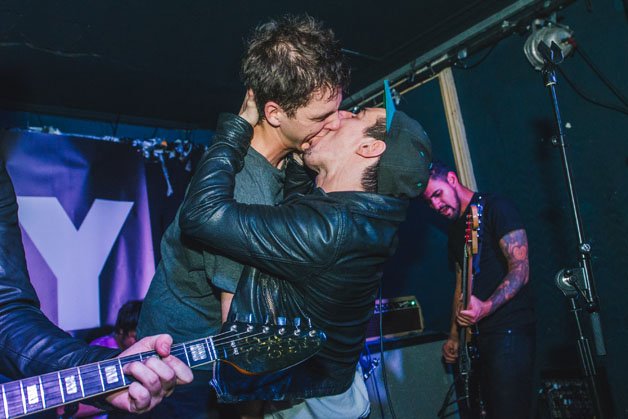 LAURIE CHEN reviews part of an exclusive series of free gigs at The Old Blue Last featuring the most exciting new bands for the year ahead.

It is a Tuesday night, and the first floor of The Old Blue Last pub is rammed full of identikit twenty-somethings clutching pints alongside their heavy coats. An expectant hush fills the room as the band prepare to play their next song, punctured by occasional murmurs of approval from the audience. “She’s good,” nods a vaguely surprised flannel-shirted man at my side.

Every January, The Old Blue Last plays host to a series of weekly free gigs in conjunction with DIY Magazine. There is perhaps no better way to ward off the post-Christmas blues and ring in the New Year than with a selection of fledgling bands playing their latest material. If you’re lucky, you may even catch a glimpse of one of the rising stars of 2015 – previous ‘Hello’ showcases have seen the likes of Wolf Alice, JAWS and Honeyblood playing some of their earliest shows.

Starting off on this particular occasion, Brighton trio Our Girl captivate the audience with their melodious, shoegaze-influenced songs. Their self-titled opening song is effortlessly performed, and quieter moments in between perfectly executed solos and layers of shimmering guitar reverb hold the audience rapt with attention. Lead singer Soph Nathan’s vocals certainly manage to hold their own against the band’s excellent playing. Having only released one single so far, we expect to hear of great things to come from this band.

The languid, dreamy set from Our Girl certainly proves to be an interesting foil for the raucous energy of London-based quartet Crows. The brooding, melancholic dirge of their initial songs is accompanied by glowering stares from frontman James Cox, who paces erratically around the stage like a frenetic Nick Cage. Suddenly, the tempo of the evening picks up as the band finally unleashes the full force of their sound. The crowd accordingly form a mosh pit in response to the throbbing energy barely contained on stage; Cox repeatedly dives into the surging audience and only just manages to return unscathed. The band’s dark, hypnotic sound is undeniably lifted by their energetic showmanship.

Following on from the frenzy of Crows’ set was always going to be a difficult task, but newcomers PROM managed to keep up the energy of the night without overwhelming the crowd. Like their predecessors, their songs fall on the grungy noise-punk end of the musical spectrum – a fact which belies their almost trite-sounding name. Frontwoman Angela Won-Yin Mak snarls into the microphone during set highlight ‘Cry Baby Baby’, which was released as a debut single shortly before their show.

Unfortunately we missed the closing act Bloody Knees, a Cambridge pop-punk quartet renowned for their messy shows as much as their nineties-influenced brand of music. Their swift rise to success has seen them play Reading and Leeds 2014, as well as dropping their debut EP, Stitches, around the same time. Judging from the raw energy of the acts we have seen so far, 2015 promises to be an exciting year for guitar-based music.

The last of this series of free gigs will take place on Tuesday 27th January at The Old Blue Last, headlined by Girl Band.