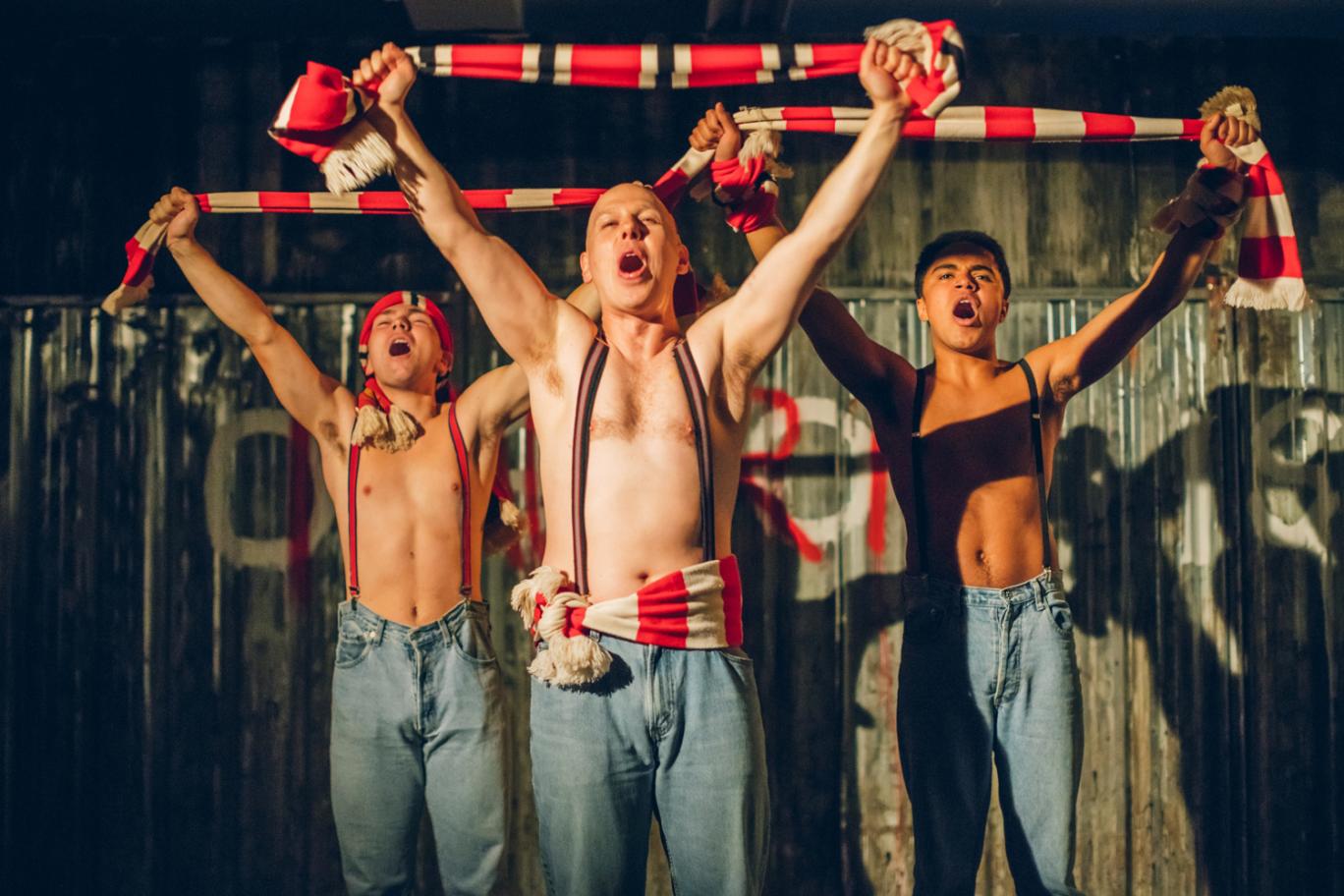 It’s the 70s. The Beatles break up, Elvis croaks, 918 people die in the Jonestown Massacre, the Sex Pistols release ‘Anarchy in the U.K.’, Margaret Thatcher is burning the working class like ants under a magnifying class and youth unemployment is at an all-time high. It’s no wonder then that playwright Barrie Keeffe’s world-view is so nihilistic. Made up of three one-act plays, ‘Barbarians’ depicts three disillusioned, restless and utterly skint young men and forms a wider narrative of the disaffected youth in 1970s Britain.

The production begins in a derelict room of the disused former site of Central St Martin’s Art School, and carries the audience through three equally dilapidated sets. The concrete walls are sprayed with slogans such as ‘Do your homework. Revise for exams. Do as you’re told. DIE’, ‘Words do not mean anything today’ and ‘I fought the law’. The three protagonists are foul-mouthed leader Paul (Thomas Coombes), his impressionable apostle Jan (Jake Davies) and Louis (Josh Williams), the aspiring and hysterical third limb. They are clad in ‘angry 70s youth’ apparel: Levi’s, breeches and signature high-top Doc Martens. They occupy themselves by smoking cigarettes, cursing and spotting cars for Paul’s cousin to steal. ‘Life is a shit sandwich,’ says Jan. ‘The more bread you’ve got, the less shit you have to swallow.’

Visceral and violent, ‘Barbarians’ resonates deeply with the youth of today. With young people three times as likely to be jobless than the rest of the population[1], youth unemployment is at its worst in 20 years. In fact, since 2010, the findings of the Intergenerational Foundation show that there has been a 10% decline in young people’s prospects across a range of measures including housing, education, health, income and debt. We’re drowning in student debt and the housing and employment markets are wastelands where money equals power. It’s no picnic.

As if to highlight the parallels between then and today, director Bill Buffery makes fantastic use of the audience themselves. One gets the sense of being both prop and actor in ‘Barbarians’. In this thoroughly immersive play we are the pub-goers nursing drinks in the boys’ local, and part of the leagues of football fans being herded into the teeming Wembley Stadium at the FA Cup Final.

The boys spend the play scrabbling for idols to apotheosize. James Dean is one —but he’s dead. Paul, played brilliantly by Thomas Coombes, is another such idol that the two younger lads look up to, yet as the play progresses it becomes clear that he is venomous. The footballers of Manchester United F.C. are heroes to the boys. But they too are defeated; in a climactic moment, Southampton wins the FA Cup Final 1-0, much to the devastation of the lads.

In the end, ‘Barbarians’ comes to an absolutely devastating conclusion; there is no hope of a brighter future in this desolate epoch. There are only false idols…and yes, life is a shit sandwich.