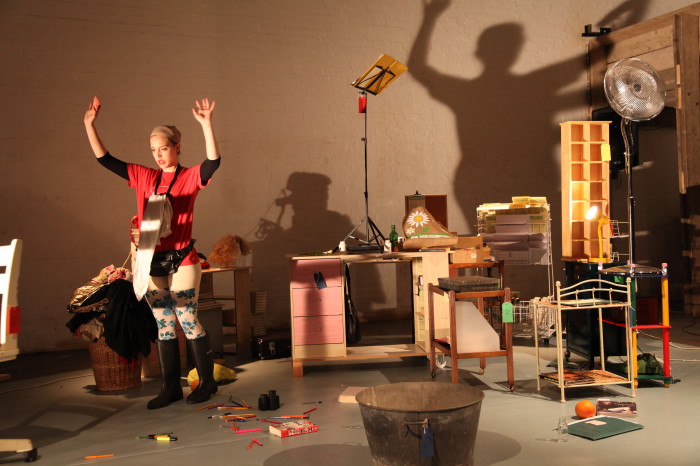 NIALL ADAMS reviews the London transfer of ‘How does a Snake Shed its Skin’.

In an intriguingly meta-twist, the three icons are thrust together as Hislop plays a version of herself constructing a one woman show. Delving into the diaries, diets and daily minutia of the three famous figures and her younger self, the play takes the audience from anarchic physical comedy to the much darker psychological issues plaguing all four of them in one woman’s head.

The show opens with a sparse stage, adorned simply with three filing cabinets: one sleek and pearly white for Marilyn, an industrial grey steel monstrosity for Maggie and a vintage wooden set for Virginia. Hislop soon bounds onto stage in a costume constructed from a patchwork of the three women’s signature looks, thus beginning a performance of immense versatility.

Hislop embodies all of her main characters’ speech, physical quirks and neuroses with ease. From Marilyn’s sultry persona to Thatcher’s harsher, more controlled vocals and movement, she completely transforms herself within a single sentence. Her comic timing is impeccable; jokes rarely miss a beat whilst still feeling spontaneous.

However, the true beauty of her performance doesn’t come into effect until later in the play. A sudden reversal in the plot shifts the tone of the script and allows Hislop the opportunity to tackle increasingly serious and frightening themes. Her earlier quirks are revealed as symptoms of her stage persona’s fractured psyche as her characters are, again, reformed into a desperate and powerful exploration of mental health.

Director Anna Ledwich flawlessly creates the play’s vision of organised chaos. The small stage, at first bare, evolves with Hislop’s performance. As her own persona declines, the space becomes cluttered with mementoes of her own life and those of the women in a breath-taking conclusion as Monroe, Woolf and Hislop confront their own demons. After Ledwich’s initially dynamic and ceaselessly moving direction, this almost still scene, lit by a single spotlight, leaves you deeply unsettled.

‘How does a Snake Shed its Skin’ is a play of two equally enjoyable halves. The hilarious opening paves the way for a dark exploration of mental health and the masks worn by Hislop, her inspirations and even the audience. Despite these heavy ideas, the play never loses its comic heart and, bolstered by Hislop’s courageous performance, creates an evening of theatre that will leave you captivated.

‘How does a Snake Shed its Skin’ plays at Ovalhouse until 10th October. For more information and tickets click here (http://www.susannahislop.com/stage/how-does-a-snake-shed-its-skin/)