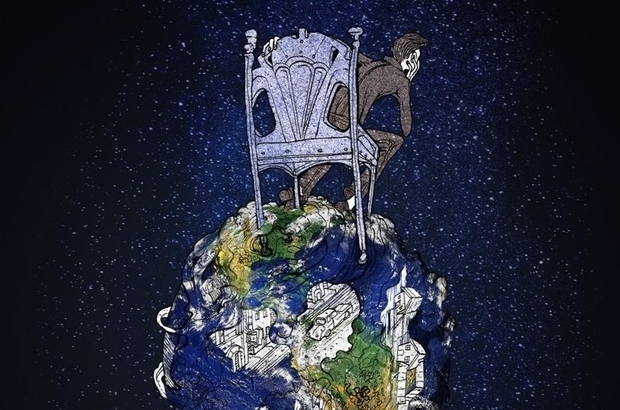 In his foreword to Lonely Planet, premiering in the UK at the Tabard Theatre this June, playwright Steven Dietz stated this: ‘In a chaotic world, friendship is the most elegant, the most lasting way to be useful. We are, each of us, a living testament to our friends’ compassion and tolerance, humour and wisdom, patience and grit. Friendship, not technology, is the only thing capable of showing us the enormity of the world.’ In this play, we see two men and the ways in which their love for each other guides them through a period of desolation and loss. It is the love of friendship; in this play platonic love is paramount, as it is the love that endures the most hardship.

Set in 1980s America, it is clear that modern technology and the accompanying perpetual tidal-wave of information and communication has not touched the world on this stage. The set is a map shop – there are easels, shelves and walls all covered with maps, and a desk sits centre stage with an outdated till and a telephone on top. We, along with the owner Jody (Alexander McMorran), never really get out of the room. His friend, Carl (Aaron Vodovoz), comes and goes. As a result of this great stagnation, the main ‘action’ of the piece is the accumulation of chairs, brought in by Carl daily and unfailingly – the chairs belong to their friends outside who have lost their lives to AIDS.

Lonely Planet is certainly a play of visual symbols and euphemisms – and of dodging the subject. Not once is the term AIDS used; ‘tests’ are mentioned, as is death, but the cause is never made explicit, except by the programme. As well as the chairs that Carl brings into the shop, which he ‘can’t bear looking at empty’, maps play a significant role as a means for understanding the characters’ perspectives on, well, perspective – there is a blatant irony that a map shop owner surrounded by images of the world is hiding from the unknown in a single room. Jody addresses what he calls ‘the Greenland problem’, being that on the Mercator Map (the ‘standard’ map we see in classrooms, on posters etc.) Greenland appears to be bigger than the entirety of Europe, when in actuality it is smaller than Mexico. The problem lies in the fact that the map is drawn from one perspective, with specific measurements that make it look as such. In an aside to the audience, Jody states ‘People I know are dying. That is my Greenland problem.’ Everything is so fixed in figurative terms that it becomes impossible for Jody to confront reality and leave the shop. Where Jody undershares and euphemises, Carl lies. He is both an autoglass repair man and a university lecturer – a whole host of seemingly incompatible vocations are detailed by him on different occasions. He refuses to tell the truth too. The shop appears to be a space from which harsh truths are exiled, creating the sense that it is both the saviour and the destroyer of these two friends.

Vodovoz and McMorran play the roles exquisitely. Though there is an excess of philosophising in the script, particularly in the first act, the contrast in the energy of the characters maintains the audience’s mirth. Especially entertaining is the map/sword/light-saber fight scene, in which they dart about among their dead friends’ chairs playing, fighting and laughing.

It is interesting that Lonely Planet has only run in the UK this year, 20 years after being written. It is a quiet play; perhaps neither angry or shocking enough to be performed at the time of the AIDS crisis, but now its quietude is affecting. One of the key issues the play flags up is the loneliness of living through such a time. It isn’t immediately clear – nor is it stated – that both Jody and Carl are, themselves, gay. The play makes it uncomfortably clear that during the crisis, the LGBT+ community did not feel a ‘safe space’ for people like Jody and Carl to belong in – and so a singular room in a map shop must suffice. Gay men (specifically in this play, though the discrimination was, sadly, far wider-reaching) were not treated as equal to their straight male companions. Carl laments the viciously empty funeral of his friend who was on the police force, and killed by AIDS. None of his colleagues would come to the funeral ‘because he didn’t die in the line of duty’ and ‘they didn’t agree with what he was doing’. Gay men were not only made explicitly unwelcome outside of the LBGT+ community – the disease made them feel unsafe within it. They literally had nowhere to go, and so did indeed inhabit a deeply lonely planet. The play goes to great lengths to show this – and its success in doing so is agonising.