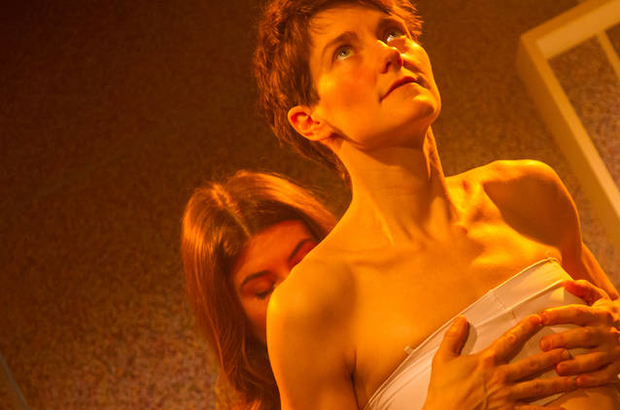 ‘No, Alice, I don’t want to become a man, I just want to stop trying to be a woman.’

It’s New Year’s Eve in the Netherlands and the neurotic Alice (Alice McCarthy) has finished the tenth spellcheck of her ‘coming out’ email to her parents back home. As her hand hovers above the send button, her partner Fiona (Anna Martine) suddenly makes a staggering revelation: he has always identified as a man, would like to live as one and will henceforth be known as Adrian. Their task now is to reconcile their gender and sexual identities with their feelings for each other. Is Alice still gay? Does this mean Adrian is straight? Such is the byzantine premise of Jon Brittain’s Rotterdam. Yet the world we live in and the relationships we have are in fact that complex. This convoluted play is a refreshing reminder that many do not feel represented by the archetypal, heterosexual romances that dominate mainstream art.

Having won an Olivier award for the outstanding way it handles issues of sexuality and gender, the play returns for its second run to find a welcome home in the proud gay district of Soho. In fact, there are signs in both men and women’s toilets notifying us that the bathrooms have been liberated from the gender binary. They are gestures of defiance to what is happening across the pond. One of the Trump administration’s first moves was to rescind the Obama-era protections for transgender students that granted them unfettered access to bathrooms and locker rooms matching their gender identity. The revival could not have come at a better time, reminding us there is still a long way to go with regard to LGBT+ rights – even in the ‘Land of the Free’.

The dialogue is hilarious, its realism throbbing in time with the deafening songs that accompany the play. The soundtrack opens with Happy Hardcore, including Kraftwerk’s famous ‘Pocket Calculator’ and some Leftfield tunes. Although the music may have seemed futuristic 30 years ago, it comes across as dated in this corner of the city. Being set in the musical past allows Rotterdam to make clear that transgender identity is not a modern phenomenon, but rather one that the mainstream media has only recently acknowledged and understood as legitimate.

Adrian and Alice have been living in Rotterdam – a port city, a place of transit – for seven years. As Fiona becomes Adrian, who he always has been, he makes the biggest transition of his life. Martine’s portrayal of a charismatic but overwhelmed transgender man in limbo is poignant to say the least. Adrian’s deflective humour becomes a feeble defence in the face of bigotry which is touched on briefly when Lelani – the pixie-like token Dutch lesbian of the play – expresses her views simply with the insulting interjection: ‘Ew!’. Rotterdam does not treat Adrian as a scientific exhibit upon which to unveil the medical intricacies of a transition. In fact, the interval all but brushes over it. Adrian is as he was before, with only slight differences: the hair is slicked back, the voice has deepened and the clothes have changed.

‘I don’t want to change the world. I just want the world to see me the way I want to be seen. The way I am.’ Adrian is caught between the urgency of affirming his real identity and the needs of others. He and the other characters end up screaming through a lot of the play, all crying out to be heard, to be recognised by society. The play is filled with moments of raw vulnerability that we all need to hear, howled over heavy basslines. It is these that will change the world.