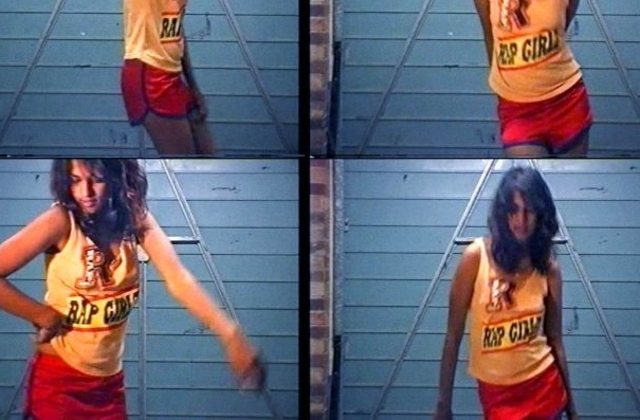 The title of Steve Loveridge’s astute take on the intermittently eminent singer M.I.A. reflects the film’s approach. MANTAGI / MAYA / M.I.A. offers a fairly standard look at the rise to stardom and the ill consequences which accompany it, much in the vein of 2015’s Amy and this year’s Whitney: Can I Be Me? The film shines, however, in the incisive observations it makes on the formation of the star’s identity, tracking her — and her sense of self, divided between those three monikers — from youth up until the mid-2010s.

MANTAGI / MAYA / M.I.A. opens on an elusive figure and seems set on understanding the opaque character of this intriguing pop star. Matangi’s journey is sprawling: from experiences in her South London home, to her exploits on her way into the music industry; from her formative visits to Sri Lanka, to her most recent appearances playing at Coachella and the Super Bowl.

Through these portraits of her life, Loveridge partly succeeds at providing a nuanced view of M.I.A.’s life. One sequence offers interesting details on the production of her album Kala as the singer hops from continent to continent, soaking up snippets of each culture as she works with local communities to gather both vocal samples and inspiration.

Yet the director often seems biased towards this pop star who he seems to adore. He fails to provide an extensive focus on M.I.A.’s creative process, undertaking instead a rather surface-level survey of the development of her song ‘Galang’ and an unenlightening interview about the creation of ‘Paper Planes’. A better look at Matangi’s creative process and the forces motivating her to make music would have added much value to the film.

In the production sequences there are allusions to a wider debate on cultural appropriation, and most intriguingly the notion of appropriating one’s own culture – a question that Loveridge shrewdly restrains himself from overtly commenting on. Instead, he imbues the film with a degree of self-awareness,  expressed for example by undercutting Matangi’s pompous musings as she heads to Sri Lanka with a wry, sardonic authorial voice. The audience is nudged to recognise Matangi’s slightly risible nature at this early stage of adulthood. It’s worth noting here that the director has little input in terms of footage, with his role mostly confined to the patching together of material created by Matangi herself throughout her life. One cannot help but think that such a trove of images could only have come from a certain type of narcissist, assured in her talent and fate in future stardom.

Loveridge frames the film with a certain droll scepticism and ironic detachment, gently mocking young Matangi and her sense of ownership over her Sri Lankan identity. These are complex scenes which transcend the standard formula of the genre, posing piercing questions about our assumptions on identity and cultural heritage. This detachment gives an active role to the viewer in deciding where Matangi sits in the debate of cultural appropriation. We watch her frame the production of Kala as a humanitarian mission – instructing producers to give ‘keyrings and some money’ to locals – and imbuing the video for Sunstream with images from a culture she only recently became acquainted with. The film soars in these moments, when Loveridge masterfully allows scenes to roam free without any subjective commentary.

In the midst of this are some tender sequences in Sri Lanka where Matangi revisits her homeland with a more watchful, respectful gaze, gradually noting her position in her newfound culture. A moment of great subtlety and potency comes on a bus ride with her mother where she realises that speaking up against the soldiers entering the bus would only endanger the other passengers. The singer, it seems, comes to realise that a world exists beyond her own privileged position. This brings Matangi’s narrative arc to a close, giving her a chance to understand the reasonable limits of her involvement with the culture that she once falsely assumed.

Whilst Loveridge does a stellar job in centring the narrative around Matangi’s personality in the first half, focus is lost in the latter half, with the film dissolving into a series of hackneyed portraits of life in the spotlight and of the industry. There is a clumsy attempt at berating the deep moral conservatism which pervades American media. The film gradually loses the insightful eye and objective judgements which populate its strongest sections, ultimately degenerating into a series of fawning portraits of a steadfast Matangi up against the system. This is perhaps due to the close relationship between Matangi and Loveridge, who both attended Central Saint Martins at the same time.

MANTAGI / MAYA / M.I.A. is a subtle and profound depiction of a refugee experience, of the impact of civil war, of the rise to stardom, of the shallow nature of the entertainment industry, and, most vitally, of a woman unravelling and piecing together a sense of herself as she stumbles into adulthood. Whilst it does descend into formula by the close, there is enough intellectual substance coursing through the first hour to make this a commendable addition to the music documentary canon.