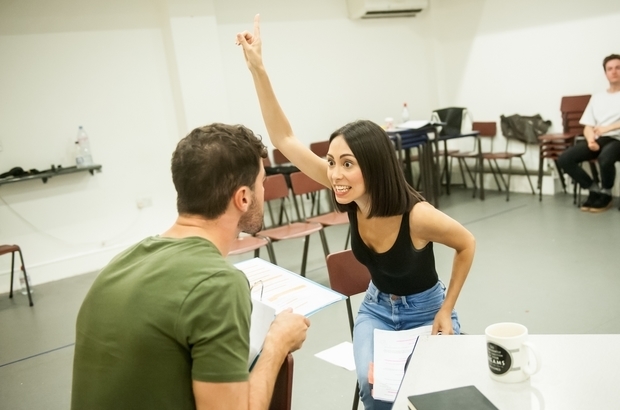 Mites, written by James Mannion and directed by Marcus Marsh, is a play that intends to illustrate the bleak nature of mental health through the lens of an absurdist drama. It is a psychological drama, dealing with issues of loneliness, mental health and emotional abuse under the eyes of two imposing male figures on the heroine of the piece.

The play consists of three characters, all within the same dramatic setting of the living room area. Credit must be given to the set and costume designer, Cecilia Trono, for creating a setting that encapsulates the deteriorating nature of the vulnerable within the play. Ruth, played with conviction by Claire Marie Hall, is a lonely woman, abandoned by her husband, who lives with her anthropomorphic cat, Bartholomew.  Richard Henderson’s performance as Bartholomew is wry and witty; excellent in his ability to develop the undercurrent of malice that would eventually come to the fore. Her vulnerability is exploited with the arrival of Ken, a pest controller, whose lies and abuse spiral Ruth into a visceral breakdown that is incredibly uncomfortable to witness. George Howard’s acting is great but lacks the intensity of his peers on the stage. At points, one feels that Henderson’s acting is mechanical, rather than what should be the height of dynamic acting that encapsulates the many deceptively emotional facets of a daring conman.

The characterisation of Ruth is intentionally hyperbolised. This is to both intensify the dark comedy that underlies the drama as well as to demonstrate how it can become so easy to view the exaggerated actions of the mentally ill as comedy. However, the presentation of mental illness under a dark comedic lens can be seen as slightly problematic as it affords the opportunity for mental illness to be caricatured. Mites does occasionally slip into caricature when presenting mental illness but redeems itself with the sinister underbelly that permeates the drama.

One scene that comes to mind concerning the mental instability of Ruth, at the beginning of the play, is Ruth’s discussion with Ken about the loss of her husband. Her character attaches themselves to Ken with such vivacity that one questions whether this is just a simple comedy rather than a dramatic take on mental vulnerability. Ruth says to Ken ‘All people say things they don’t mean in the heat of passion’ as a retort to his confusion after she associates Ken with Kenneth (her husband). Within this scene, Marcus Marsh’s direction really brought out the best of Hall’s acting ability. The exaggerated physical movements of Ruth – at points jerking her head from one direction to another with such dramatic zeal –highlights the growing instability of both herself and the scene around her.

It is fascinating to note the emotionally abusive figure of Bartholomew, who asserts the traditional male role within the household and reduces Ruth to merely a subject that he can use to convey his existential dread at being a cat. Both of these figures – Ken and Bartholomew – highlight a patriarchal dynamic that is actively working towards Ruth’s ruin. The only aspect that is supporting her is the increasingly unstable voice in her head, that often warns her to question the integrity of the two men within the drama. Mannion’s bizarre writing is seen in this scene where the audience hears an omniscient voice that is not heard by the on-stage audience rather than Ruth, who reacts violently and illustrates, through her acting and Marsh’s direction, the disintegration of the stable aspect of herself and her growing lack of agency.

One issue that the play suffers from is difficulty establishing a consistent tone. Though it is meant to be an absurdist exploration on paranoia and vulnerability – which does afford the play leniency in regard to its dramatic structure – the tonal shifts between scenes can often be jarring rather than fluid. One example is the transition from the trio of Ruth, Ken and Bartholomew to a scene concerning a family of mites within the same setting; their family life running parallel in instances to that of Ruth. However, the jagged transitions between certain scenes within the play does not detract one from admiring the determination of Mannion to construct a dramatic piece that centres itself on demonstrating vulnerability, domestic instability, and mental health issues within both a comedic and deeply disturbing paradigm. Evidently, Mites is a play that tackles the perennial topics of mental illness and the search for identity under a ruling domestic authority. Through the use of absurdist theatre, Mannion is successful in making his audience consider how all of us perceive these topics in our everyday lives.