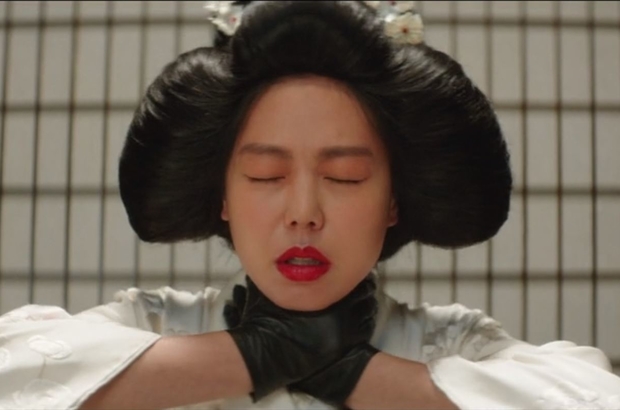 The lesbian narrative of Sarah Waters’ Fingersmith revolves around duplicity and entrapment. Beautifully reimagined for the screen in The Handmaiden, both works present a captivating portrayal of the way disguise forces itself upon queer identity. The role of clothing in Fingersmith is at the forefront of the reader’s mind. With dishonest intentions, the characters mould artificial identities through changes in dress in order to control the way in which the world perceives them. But within this method there is a potential sacrifice of the self. Does a disguise leave space for the existence of a true self beneath? At what point does external perception become self-perception? The dizzying web of betrayal and fraudulence in Fingersmith plays with these questions, continuously drawing upon the crisis of identity that can plague the queer experience.

The narrative structure reflects the act of undressing. The novel’s complex deception plot is presented in three parts, the first of which follows the narrative of Sue Trinder, an orphan who was raised in a den of swindlers and pickpockets. She enters into a scheme to persuade Maud Lilly, a rich heiress living with her uncle in the countryside, to marry a forger who is known to the London circle of thieves as ‘Gentleman’. Masquerading as a maid at Briar, Sue forges an intimate bond with Maud in the hopes of stealing a cut of the heiress’ fortune. The next part of the novel reveals a second layer of the deception plot in which Maud plans to steal Sue’s identity and banish her to a madhouse under her name.The third part undermines the authority of both heroines as the plot is uncovered to be part of a wider deception scheme orchestrated by Sucksby, Sue’s adoptive mother, who plans to steal Maud’s fortune. The reader is constantly tricked too, as each narrator is undermined in the slow uncovering of this intricately woven plot. Each layer of duplicity peels away like an item of clothing, revealing moments of truth at each stage. What endures in the end is the affinity between Sue and Maud. After all the layers of deception have been stripped away, the bond between these lovers is the essence that remains.

Clothing is shown to be an instrument of confinement, trapping its wearer into an identity that lies outside independent choice. The silhouette of a jacket and fabric of a shirt hold a network of binaries that threaten the fluidity of identity and sexuality. It becomes difficult to discern the moment when clothing as a truthful representation of the self becomes, instead, a disguise. Corsets and crinoline clutch Maud’s body into a silhouette of perfect femininity. She is told by her housekeeper that she must endure the grip of the corset to gain ‘the figure of a lady’. The morbid aesthetic of corsets fuels the thread of male pleasure in female pain that runs through Fingersmith. Descriptions of Maud’s suffering are laced with sensuality: ‘My corset holds me like a fist. My knuckles, tugged into their stiff skin gloves, are starting out in bruises’. Maud’s bruised skin and clutched flesh emanate a fixation of beauty in female suffering. This fixation arose in a time when female death and the macabre death were often romanticised in fiction – an era that saw Edgar Allen Poe state that the death of a beautiful woman was ‘the most poetical topic in the world’. The corset became a way to imitate this morbid ideal.

In one such reading, Hideko concludes a twisted version of Romeo and Juliet with a scene of self-strangulation. Hideko’s black gloves resemble disembodied hands imposing sadistic will on their object of desire. The red of her lips offsets the near-monochrome of the frame and draws the focal point towards her clenched teeth and silenced speech. The masochistic overtones of this image are in parallel with Waters’ idea of the morbid beauty that is expressed by the corset. Shortness of breath in a woman conjures an immediate association with the gasping passion of sex. Physical constriction in clothing imitates male possession of the female body, bringing the private world of erotic pleasure into the public. Park brings this concept to his viewer with directness and brutality.

The symmetrical tidiness of this scene further reflects the theme of deception. The uniform grid of the wall behind Hideko mirrors the pristine neatness of her fashioned hair, the gentle silk of her kimono countering the stiff leather of her gloves. As the shot zooms out a bonsai tree appears behind Hideko, its groomed branches a symbol of deliberate design. The film’s close attention to costume and texture echo Waters’ interest in disguise. The visual ecstasy of luxurious colours and pristine composition, created by Park’s long-standing cinematographer Chun-hoon Chung, is an aesthetically seductive experience. Eroticism permeates the surface of the film, concealing an underbelly of perversion and betrayal. Just as Waters utilises the narrative form of Fingersmith, Park exploits the cinematic medium to deceive his viewer.

Amidst the tempest of ulterior motives that consumes Fingersmith, the affinity that grows between Sue and Maud (or Sook-Hee and Hideko) becomes a force of transcendence, an escape from the cruel grasp of greed and exploitation – their love is truth. Primal desire and impulse are uncovered in sexual union; the lovers escape the trappings of external influence by following instinct. Fingersmith and The Handmaiden present a narrative structure that undresses itself. The journey of self-discovery in both texts is a process of peeling away elements of the self that have been decided by others to find what lies beneath.