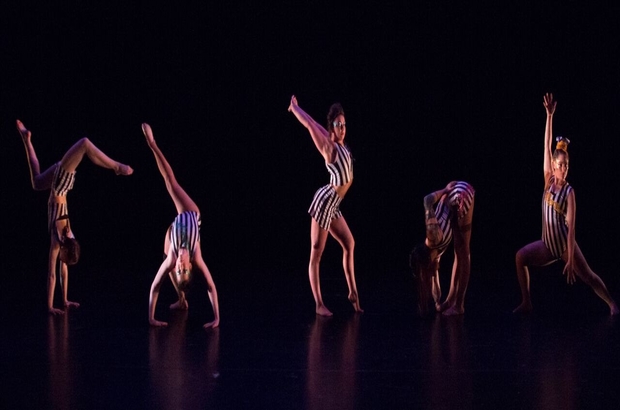 It all begins with a routine. Five women tumble across the stage, a dynamic landscape of high leg peaks and box splits troughs. Their innate spatial awareness and perfectly pointed toes speak of their expertise, but their faces tell another story. The physical routine is challenging, but its emotional counterpart is harder: the women force clenched smiles, executing shimmies and out-of-place dance moves that seem to belittle the astonishing athleticism demonstrated by the sequin-adorned performers. And that’s the point.

In just sixty-five minutes, Ellie Dubois’ No Show efficiently dismantles the circus and highlights the blatant sexism sketching the definitive perimeters that establish a woman’s place within the Big Top. While the acts themselves are mesmerising, it’s the narrative accompanying the show that creates the greatest impact. As Camille Toyer, seemingly effortlessly, glides and twists across the stage on a Cyr wheel, Kate McWilliam lists the multitude of injuries (not least crushed toes and a cracked skull) that a misstep in the routine would threaten. When McWilliam herself recounts her own acrobatic talents and accolades, she poignantly addresses her job description: as a woman in the circus, she is not invited to execute powerful tumbles like her male colleagues. She is, instead, expected to appear ethereal, pretty, graceful. She tells of male performers, trying but failing to support her athletic endeavours, encapsulating the deep-rooted sexism within the industry in a single sentence: ‘They say I’m a good acrobat. For a girl.’

The unraveling continues with Alice Gilmartin’s goofy, charismatic audience engagement being silenced by Francesca Hyde and Michelle Ross, who pastiche pushy directors, ordering Gilmartin to just ‘get on the canes and do the handstand.’ While Gilmartin displays enormous strength and somewhat defies gravity for minutes at a time balanced on her hands on a pair of wobbly sticks, Hyde and Ross order her to ‘be more sexy’ and ‘SMILE’. Observing Gilmartin’s reaction to the direction is impactful. Her face, distorted and uncomfortable, organised into a rictus smile, contrasts the sheer strength and power of her body. She is upside down, one-handed on stilts, yet she is still criticised for sweating and audibly breathing. The dialogue surrounding Gilmartin’s act uncomfortably exposes a facet of the industry indirectly yet succinctly, suggesting an archaic mindset that women should be seen and not heard.

No Show is a spectacle, warm-hearted and humorous yet deeply focused on the issues of its genesis. While sometimes a little offbeat and clunky, the narrative is engaging, charismatic and inclusive, inviting audience members to experience a part of an industry unfamiliar to most. The piece is incredibly raw and incredibly real: after jaw-dropping acts (including a hair-hanging aerial routine), the women are left exhausted, breathing heavily, reaching quickly for their water bottles. The fusion of illusion and reality creates a show that is immediately relatable, presenting Fran, Camille, Kate, Michelle, and Alice not as mysterious acrobats swinging across grandiose stages, but instead as another group of frustrated professional women experiencing sexism in the workplace. Dubois’ show is an important and highly relevant piece of art, humorously analysing an industry rooted in artifice while simultaneously displaying commitment to craft in a flawlessly executed set of gravity-defying routines. For even the most circus-opposed spectators, No Show will strike a chord. Akin to supporting your local girl gang, a trip to Soho Theatre this month invites audiences to share a journey and get involved in an incredibly necessary conversation. All while watching some pretty cool tricks.