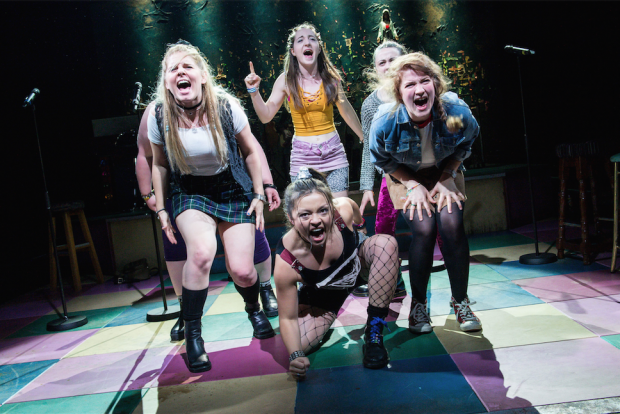 ALASTAIR CURTIS reviews Our Ladies of Perpetual Succour at the National Theatre.

Arriving at the National from its Scottish tour, Lee Hall’s adaptation of Alan Warner’s cult favourite, The Sopranos, is a story of the self-discovery and sexual awakening of six convent choirgirls, taking part in a national choir competition in Edinburgh. But these are convent choirgirls by name and not by nature. They throw out the final note of Mendelssohn’s ‘Lift Thine Eyes’ before breaking into a fit of laughter, giggling about tits and dicks. Potty-mouthed, yet also pitch-perfect: one of the girls is an ELO fan and their renditions of Jeff Lynne’s music punctuate Vicky Featherstone’s production. It becomes an outlet for the girls’ energy as they relentlessly dance, stomp and sing. The likes of Handel and Bach crop up now and again, but they serve as an embodiment of the repression, the rules and regulations set down by Our Ladies school, that the girls are trying to flee.

How rare it is to see an all-female cast at the National Theatre. These are six young and ballsy but also distinct women: there is the popular, garrulous group leader Fionnula (Dawn Sievewright); budding musician Kylah (Frances Mayli McCann); Chell (Caroline Deyga), who’s sister is also her auntie; Cancer survivor Orla (Melissa Allan), and Manda (Kirsty MacLare), who often pours powdered milk into her bath and pretends to be Cleopatra. On the periphery is Kay (Karen Fishwick), clever and standoffish, but more complex than the others realise. All of them are brilliantly-crafted characters: a little rough around the edges, often burdened by family tragedy, but possessing an exuberant life-force as they set out on a twenty-four odyssey hour around the city.

At times it feels like Edinburgh has emptied all its more nefarious inhabitants into the play: the criminals and the drug-pushers, the promiscuous and the perverts that stalk the city’s streets. The conceit of Hall’s adaptation is that the girls re-enact their rampage around Edinburgh for us, using a grimy nightclub as their stage. Parading from pub to pub in a whirl of sex and Sambuca, the six girls double up as the people they encounter, switching characters with impressive ease: the disapproving waiters, the ogling regulars and leering men, all of them out to take advantage of the girls’ unquenchable vitality. Fionnula, in particular, has a highly comedic turn as a seedy 30-year-old man, joined by depressed divorcee Mike (Kay) and lingerie thief Danny (Orla), who invite the girls back to their flat for drinks and sex. The girls regularly dice with death, but they re-enact such scenes playfully, heady on drink and their unflappable ability to bounce back from the collection of crises that afflict their day trip: from a visit to A&E to accidental arson, they take everything in their stilettoed stride. Their youth cushions every crisis they encounter. And each encounter is symbolic on some level, helping them shed their fear, innocence and chastity.

Vicky Featherstone’s production unfolds at breakneck speed, with a punchy splicing of scenes as the girls pair off to explore the city. Hall’s writing is witty, rude and frequently hilarious, but it also guards against farce, focusing on the internal struggles of the characters rather than their struggle to neck their umpteenth tequila shot. For all her brassiness, Fionnula is riven by insecurities and her admission of how little she knows about love is beautifully handled by Dawn Sievewright; her invocation of the Agnus Dei liturgy (“take away the sins of the world, have mercy on us”) transforms it into a religious epiphany. Orla, meanwhile, is making up for lost time: out of chemo after 2 years, she pursues sex at full-throttle, but when she gets it, with an awkward boy from the club, it’s tinged with sadness. The intimacy reminds her of her own physical invulnerability, and Melissa Allan’s unassuming and brittle performance upsets more than the rest.

Hall ensures that all the girls gets their time in the spotlight, though this presents its own problems. The production sags in its last half as it struggles to satisfactorily wrap up each of their stories. In particular, the characterisation of Orla and Fionnula can feel hurried, nearly completely overshadowed in the first half by the girls’ riotous hedonism and only allowed to flourish when it’s too late, in the bittersweet second half. The play climaxes early, though in style — with a box of fireworks and dazzling disco lights — and it becomes a case of multiple endings, of one scene too many: never not brilliant, but often unnecessary.

But it is towards the play’s end that limits on the girls’ lives — put there by parents, by their social class, by their own bodies — begin to reveal themselves. The very act of transgressing, of wanting to ‘smash the fucking system’ as they put it, only serves to strengthen the system’s grasp. Orla’s cancer prognosis is inevitable and awful; Kay’s six weeks pregnant and her strict Catholic parents object to an abortion: these girls’ lives unfurl, depressingly, before them. Wrought with melancholy, Lynne’s ‘Wild West Hero’ rounds off the play nicely. Its lyrics — ‘there might/Just be a better life/Away from all we know’ — put into words the powerful yearning the girls experience on the journey home: they know that this is the best it gets, the moment just before they collapse into adulthood. They will part ways, some to uni and others to prenatal classes, and time will whittle away their sense of life’s infinite possibilities.

This is an affirming play, capturing the awesome promise and electricity of youth in words and music. It exhilarates; and left many around me in tears.

Our Ladies of Perpetual Succour is showing at the National until 1st October. £5 tickets are available to under 25-year-olds through the entry pass scheme. You can book here.